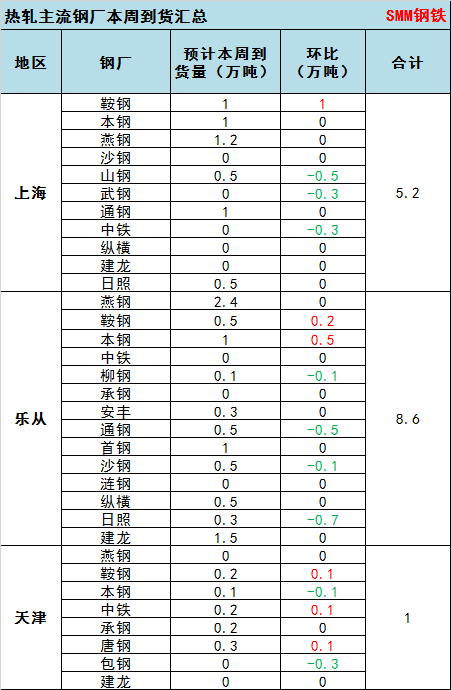 Lecong market: 86000 tons of resources arrived this week, month-on-month-7000 tons. Overall resource arrivals declined slightly, mainly affected by two aspects. First, the recent northern price (Tangshan price 3500-3510 yuan / ton) relative to the southern price (Lecong price 3610-3620 yuan / ton) is at a high level, and steel mill resources are still profitable in the northern region. Therefore, the willingness of some steel mill resources to go south is on the low side, resulting in a decrease in the arrival of resources in the near future. Second, affected by the upside-down hanging of Rizhao resources (40-50 yuan / ton) and the pessimistic expectations of the market, some lock-up steel mills have recently received deviations, so the resources sent to South China have been reduced one after another.

Tianjin market: 10, 000 tons of resources arrived this week, a month-on-month ratio of-1000 tons. The overall resource arrival volume continues to be stable, and the fundamentals of supply and demand are also in a relatively stable state. Among them, it is still mainly in Chenggang and Tangshan Iron and Steel Co., Ltd. Overall, from the mainstream market resources arrival statistics in the past two weeks, South China market resources have not yet increased significantly, and under the influence of upside down, market pessimistic expectations and environmental protection production restrictions, South China resources have even begun to arrive at an average level of arrival (93000 tons from an average). Therefore, it is estimated that the supply pressure in the South China market should not be too worried by the end of October or even the beginning of November. However, as the weather is getting colder and the northern resources are moving south one after another, and the production line of new production capacity is put into operation, the risk of increasing supply pressure in the later stage still exists.