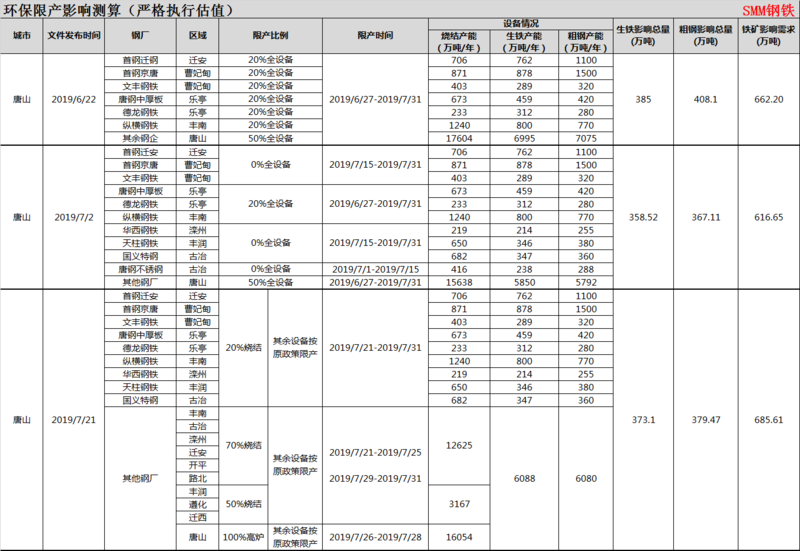 Among them, the Handan area issued an emergency notice on 19 July 2019, from 20.00 to 26 July 2019, to strengthen the control measures for the prevention and control of air pollution in and around the main urban area, and stipulated that on the basis of the original production restriction policy, the sintering machines allowed to be produced by iron and steel enterprises shall be suspended from 20:00 to 8:00 the next day, among them, Wu'an City, which is the "concentrated place" of most steel enterprises in Handan City, Compared with the last production limit document to increase the sintering impact of 289200 tons (according to SMM estimates, if all relevant steel enterprises in Wu'an City strictly follow the document, this document is expected to affect sintering capacity of 5.4497 million tons, pig iron capacity of 2.0453 million tons). According to SMM research, local steel enterprises more feedback has been in accordance with the policy provisions of the implementation of production restrictions;

Since late June, the news of environmental protection and production restrictions in various parts of the market, such as the tide, has never stopped. However, under SMM research, in addition to the strict implementation of policies in Tangshan and Handan, no policies have been issued or have not been clearly implemented in other areas, and the impact on steel supply is not very clear, but the mountain and rain is about to come into full swing. At present, the release and implementation of production restrictions policies in other areas can still be expected. Follow-up status SMM will continue to track.

MOST POPULAR
data analysis
1.Iron ore arrivals at Chinese ports plunged 2.44 million mt on week
industry news
2.Steelmakers in Shaanxi, Shanxi, Gansu and Sichuan decided to cut construction steel output by 32,000 mt per day
data analysis
3.China Steel PMI improved in September amid high season and production rush
company news
4.Notice: National Day/ Mid-Autumn Festival holidays publishing schedule
industry news
5.A summary of news in China's steel industry chain
China Metals Market
Privacy policyCompliance CentreSMM Credit ServiceContact UsAbout UsTerms & ConditionsSitemap
Notice: By accessing this site you agree that you will not copy or reproduce any part of its contents (including, but not limited to, single prices, graphs or news content) in any form or for any purpose whatsoever without the prior written consent of the publisher.