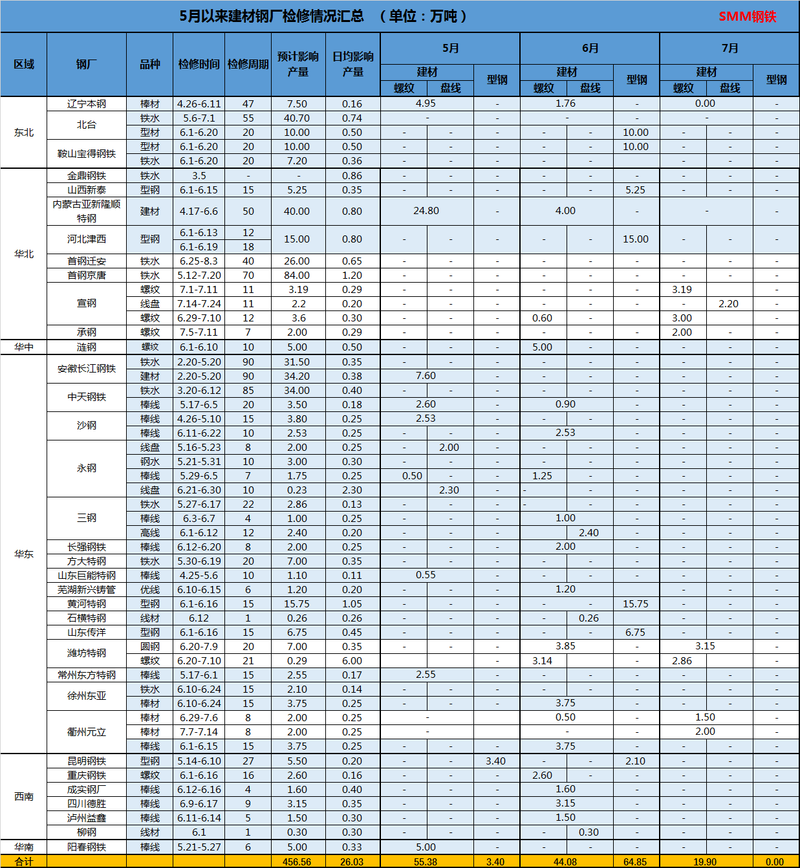 According to SMM statistics, according to the steel mill maintenance information released at present, the number of building materials involved in the maintenance of steel mills in July was reduced by 199000 tons, 2.0842 million tons less than that of 318.32 in June. From a regional point of view, in addition to North China, especially Hebei Province due to the impact of environmental protection and production restrictions, maintenance has increased, other areas of steel mills are still in a state of full production.

At the beginning of July, steel prices soared. On the 1st, spot prices around the country rose 50 yuan to 150 yuan / ton stimulated by the news of production restrictions, and the national average price rose 89 yuan / ton. Although it has fallen somewhat in the past two days, it is still better than June (June, the national monthly average price is 3996 yuan / ton, as of today, the national average price is 4083 yuan / ton). In this case, the profit situation of steel mills has been improved (according to the SMM data model). The average profit of rebar in long process steel plant in June is 318 yuan / ton, as of today, the average profit of rebar in steel plant since July is 377 yuan / ton), and the profit of thread still occupies the first place in the variety of common steel. At the same time, from the demand side, after the middle and late July, the southern region may gradually come out of the haze of "Meiyu," and demand will gradually decline under the influence of seasonal interference, accompanied by strong support from the capital side. According to statistics, the issuance of local government bonds totaled 899.553 billion yuan in June, a new high of + 68.36 percent in a single month of the year, and a total of 790.068 billion yuan of new general bonds were issued in various provinces from January to June 2019. A total of 1.38659 trillion yuan of new special bonds will be issued, and the toughness of demand for building materials will continue to exist in the later period. In this case, steel production enthusiasm is still relatively high, the willingness to take the initiative to reduce production is weak, according to SMM survey, some mainstream steel mills in East China in July production equipment fire, building materials production schedule continued to increase compared with the previous month.

Generally speaking, although the production limit in Tangshan is stricter than that in June as a whole, after the "strictest" documents in late June, the "latest" documents in July show signs of loosening again. In addition, the screw thread accounts for only about 20% of the products produced by the local mainstream steel mills. And under the consideration of profit maximization, steel mills will "preserve" thread output to the maximum extent, so if the subsequent production limit does not continue to expand, At present, it is difficult to significantly improve the high position of thread supply.