The overall resource arrival volume of hot rolled mainstream steel mills this week totaled 172000 tons, compared with 204000 tons-32000 tons last week, and the arrival of goods in the three mainstream markets showed a downward trend. Mainly due to:

First, the transaction has been mediocre since April, coupled with the early traders in the inverted hanging state, resulting in a relatively low mood to take goods. In addition to the resources of the Association, there are fewer additional orders.

Although the resumption of production in steel mills has improved since June (the relaxation of production restriction and the operation rate of blast furnace in Tangshan area have increased (89.85%, + 0.27%), compared with last week), but it takes a certain period for production to be shipped and resources to reach each market.

In addition, feedback from the downstream research, recently due to the news and policy side of the good stimulus, so that the terminal procurement mood has picked up, the transaction situation has improved slightly. In addition, since June, traders have been gradually in a profitable state (today, Yangang has received the goods into the warehouse 3830 to 3840 yuan / ton), so in the case of less market resources and the shortage of some specifications, the enthusiasm of traders to take goods has been improved, so it is expected that the market arrival will increase in the later period. Of which:

[Shanghai Market] Resources arrived at 84000 tons this week, compared with 86000 tons to 2000 tons last week. Although the market arrival has been slightly reduced, but the overall arrival pressure is still greater. Among them, the main resources are Yangang, Bengang, Jianlong and Angang. WISCO and vertical and horizontal additional delivery have arrived one after another this week.

[from the market] resources arrived at 71000 tons this week, 94000 tons to 23000 tons compared with last week, mainly due to more weather in the region this week, resulting in slower unloading at the wharf and delaying the arrival of resources to the factory warehouse. But overall, the market arrival pressure is still relatively small, in which the arrival of resources are mainly Yangang, Jianlong, Lianyuan Iron and Steel, vertical and horizontal additional investment. 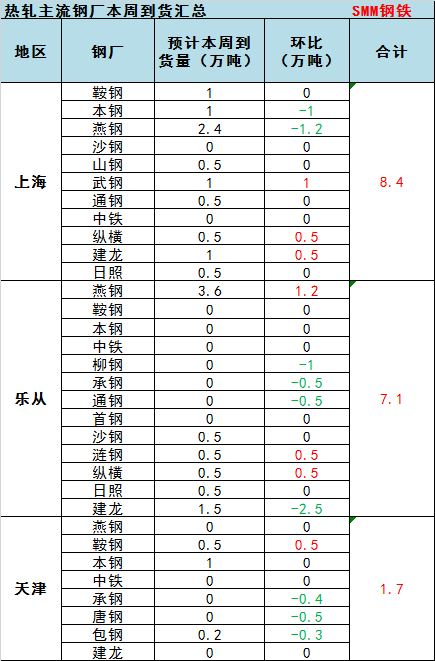