On 31 May, Tangshan issued the implementation Plan for enhanced Control measures for the Prevention and Control of Air pollution in June, which stipulates that The iron and steel enterprises in Lubei District, Kaiping District, Guye District, Fengnan District, Qian'an City, Luanzhou City and Luannan County continue to have the same state of production restriction as in May. At the same time, it is clearly pointed out that the Caofeidian District Shougang Jingtang Company and Wenfeng Iron and Steel Co., Ltd. Leting County Tanggang medium and heavy plate, Delong Iron and Steel and Fengnan District vertical and horizontal iron and steel stop 20% of the sintering machine, shaft furnace, blast furnace, converter, lime kiln production equipment, And on the basis of the original addition of "provisions"-related to the relocation of iron and steel enterprises are not subject to production restrictions. As soon as the news came out, the weak sentiment in the market intensified again. SMM has conducted research on this. 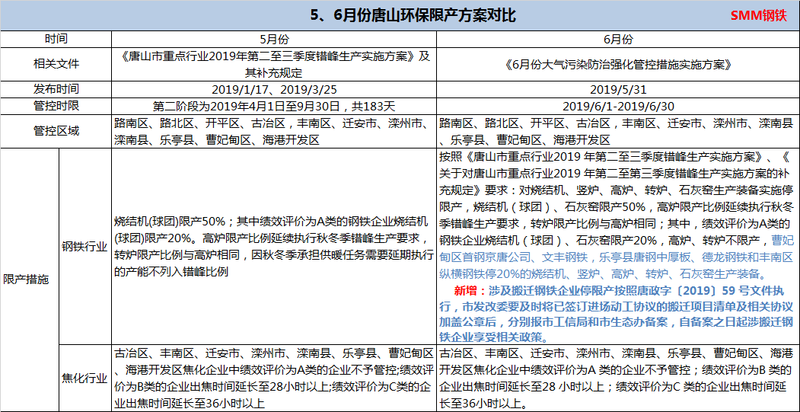 According to SMM research, most steel mills reported that the production limit in June did show signs of loosening, and even some steel mills reported that there were plans to resume production of blast furnaces in the near future. In this case, steel supply will remain high in June and spot prices will continue to come under pressure. The specific research situation is as follows:

Steel Plant A (Luanzhou, rating B):) at present, the production equipment is in normal operation, the impact of the new documents is not significant.

Steel mill C (Qian'an, rating C): in early May affected by environmental restrictions on production stopped a 1080m / s blast furnace, has not yet resumed production, the resumption of production time to the later government notice, feel that the intensity of production restrictions in May and June has not changed.

Steel mill F (Kaiping District, rating B): June and May production restrictions are basically unchanged, the output is limited by 50%, but the production equipment is not limited, are still in normal production.

CISA member steel mills daily output down 1.5% in late Nov
Both steel output and inventory fell in the last 10 days of November.