CST
Source:SMM
Yangshan copper premiums with a quotation period in September stood at $42-67/mt under warrants during August 2-6, and between $35-64/mt under bill of lading (B/L). The SHFE/LME copper price ratio stood at 7.34 as of August 6.

Brisk trades pushed import premiums higher significantly. The influx of imported copper, driven by a higher SHFE/LME copper price ratio, lowered premiums in the domestic spot market. Lower spot premiums eroded into profits of imported cargoes, with import losses below 100 yuan/mt. Market demand was strong. However, offers were limited. Most of the sellers were optimistic over the market in the short term, holding onto their cargoes.

Quotes for mainstream pyro-copper under B/L stood at around $65/mt, and quotes for the two high-quality brands stood at around $70/mt, which was close to long-term contract levels. Traded import premiums under warrants rose amid tight supply. Quotes for hydro-copper rose to around $55/mt. 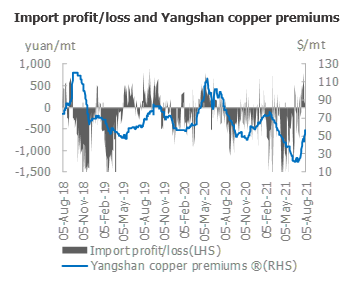 Copper inventories in the Shanghai bonded zone decreased 17,500 mt from July 30 to 392,100 mt as of August 6, a fourth straight week of decline.

Buyers have sought cargoes under warrants and bill of lading amid a favourable SHFE/LME copper price ratio, and this pushed up Yangshan copper premiums significantly. Increased customs declaration has driven continuous decline in bonded zone inventory. Operating Rates at Copper Processing Plants in Guangdong Hit a Low as Premiums Skyrocketed Amid Low Copper Inventory
The copper cathode inventory in Guangdong has fallen below the 10,000 mt mark, and stand at only 6,527 mt, the lowest since 2018, according to our SMM statistics.

All
MOST POPULAR
1.SMM Review of Pre-Holiday Base Metals Market and Prospect
2.National Day Holiday Notice
3.CSPT Set the Spot Copper Concentrate TC in the Fourth Quarter at $93/mt
4.China Weekly Inventory Summary and Data Wrap (Sep 30)
5.SMM Morning Comments (Sep 22): Base Metals Closed Mostly with Losses amid Firm Rate Hikes in US
Shanghai Metals Market
Privacy PolicyCompliance CentreSMM Credit ServiceContact UsAbout UsTerms & ConditionsSitemap
Notice: By accessing this site you agree that you will not copy or reproduce any part of its contents (including, but not limited to, single prices, graphs or news content) in any form or for any purpose whatsoever without the prior written consent of the publisher.