Today, Shanghai copper opened at 52440 yuan / ton, fell slightly to an intraday low of 52320 yuan / ton after opening, then raised its center of gravity, adjusted around 52470 yuan / ton shock, and closed at 52430 yuan / ton at noon. Opening in the afternoon, the center of gravity continued to rise above the daily average and climbed the intraday high of 52690 yuan / ton, but the rising kinetic energy fell again, and finally closed at 52590 yuan / ton, up 330yuan / ton, up 0.63%. Spot aspect, Shanghai area because the copper supply of Pingshui is not abundant, the price of good wet method is raised with Pingshui, but the downstream enters the market to buy goods in general, the transaction is limited. Imports continue to suffer large losses, import arrivals have eased since last week, and the increment of domestic outflows is limited. Although domestic inventories have not been significantly removed, traders continue to have price-raising sentiment, buying goods at low prices actively, and rising and sticking water can hardly see a downward trend.

Today, the copper in Shanghai closed, and the KDJ opened upward and jumped off the multiple moving averages below. Wait for the guidance of the outer disk at night to test that Shanghai copper can maintain the upward trend. 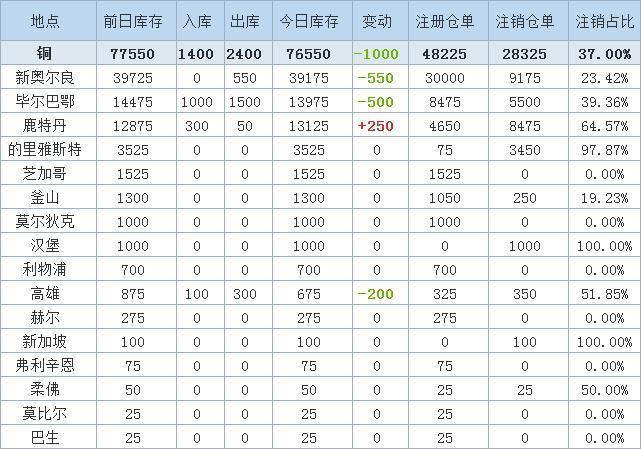 [Codelco escalates tensions with unions Copper miners say they will take action] tensions between Chile's national copper industry and trade unions are escalating, and unions are reported to be dissatisfied with Codelco's prevention and control measures against the epidemic and the pricing of insurance premiums. (FTC), the copper workers' union representing the unions of mining companies, said Codelco was violating the legitimate rights and interests of workers. Workers at Chile's national copper (Codelco) said on Friday that they would take action against these "job threats". "View details

[Codelco:5-July Ministro Hales mine ore processing efficiency increased significantly] according to Codelco's website, the raw ore processing capacity of its mine Ministro Hales reached 2530 tons per hour from May to July, an increase of 23 percent from the 2060 tons per hour in the first four months of this year. In the past three months, the mine has been able to process 57000 tons per day, which has reached the expected level of 2021, and the daily ore processing capacity from January to April this year is only 46000 tons. "View details

Chilean copper exports fell 11 per cent month-on-month to $2.76 billion in August, the biggest drop since January, according to trade data released by Chile's central bank on Monday.