According to SMM Steel, recently, the East China market has changed from weak to strong, spot prices continue to be strong and lead the way up, and the price gap between the north and the south has gradually widened, thus giving rise to market concerns about northward moving southward to disturb the fundamentals of the East China market. The SMM is investigated and analyzed. The details are as follows:

In the early stage, due to the inappropriate price difference between the north and the south, the arrival volume of the East China market continued to be small, but the terminal demand continued to recover, prompting the fundamentals of the market to continue to improve. On the other hand, the supply side of the northern market continues to increase, and the terminal demand is weaker than the previous period, which leads to its fundamentals not as strong as the East China market. Therefore, driven by this round of capital + sentiment + macro positive (time dimension from mid-late June to the present, representing the markets of Shanghai and Tangshan), the East China market has risen 250 yuan / ton, while the northern market has risen 150 million yuan / ton, prompting the price gap between the two markets to gradually widen. As of today, the price difference between the two places is 100 yuan per ton, gradually providing conditions for the southward movement of northern resources.

Figure 1: the trend of price difference between north and south (Shanghai-Tangshan) 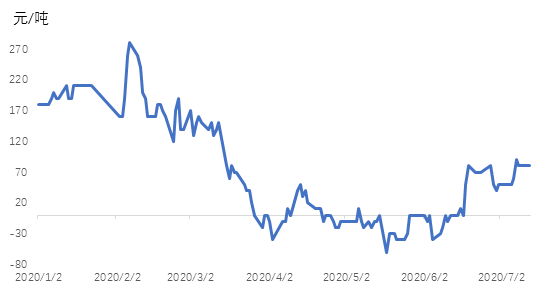 However, according to SMM Steel's current feedback from steel mills and traders, a large number of northern resources have not yet been sent to the East China market. Only some of the out-of-stock traders have a small number of lock-in resources, the northern steel works said that the recent local and surrounding areas can be digested, southward is not the best choice, so it is mainly wait-and-see. At the same time, Angang and Bengang, two large steel mills in the north, gave a 30% discount to the resources of the East China long Association in July. Therefore, in the short term, the supply of resources in the East China market is still relatively tight, the fundamentals are still strong relative to other markets, and short-term spot prices are expected to remain strong.