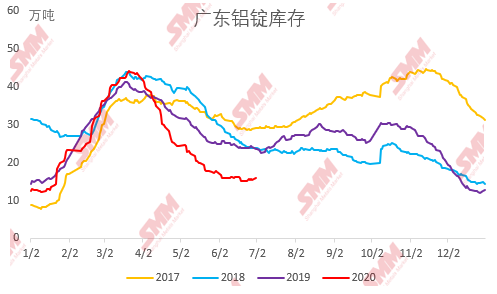 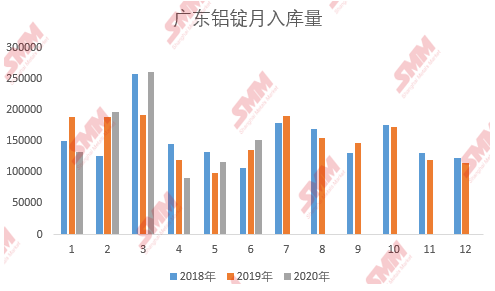 In June, the output of aluminum ingots from Guangdong public warehouse (169300 tons) decreased by 8.93% from the previous month, but increased by 18.47% compared with the same period last year. The monthly Treasury has declined continuously but by a small margin, which is still a state of growth compared with the same period last year. After peaking in April and May, the demand side began to weaken in June. On the one hand, the continuous rise in aluminum prices makes the lower reaches afraid of heights and less mining, more to digest the early low-cost inventory or just need replenishment, on the other hand, small and medium-sized enterprises are facing a seasonal decline in demand after digesting the backlog of orders in the early stage. however, the new orders of large-scale enterprises are still considerable.

The increase on the supply side is obvious. In June, the volume of public warehouses reached 151600 tons, an increase of 11.06% over the same period last year, and an increase of 30.24% over the previous month. In addition to the continuous delivery of domestic aluminum ingots in the north and southwest, the impact of overseas aluminum ingots on inventory is also increasing. Since the opening of the import window, imports of aluminum ingots have continued to enter the Guangdong market, with a small number in May, but there has been a marked increase since mid-late June. Aluminum ingot brands from Russia, Malaysia, Australia, India, Iran, Indonesia and other regions have all poured into the Guangdong market, and the cumulative quantity may reach the order of 100,000 tons, some of which have entered the public warehouse in Foshan.

From the point of view of the futures price, the 07Unix 08 contract is still in the state of import profit, and the window continues to open. Today, the stock of aluminum ingots in Guangdong public warehouse is 166600 tons, an increase of more than 16000 tons from the phased low of 150500 tons on June 22nd. Facing the traditional summer off-season in July, demand will weaken somewhat, and the supply side still has room to continue to increase. It is very likely that aluminum ingots in Guangdong public warehouse in July / August will be a process of accumulation.