CST
translation
Source:SMM
Weak demand at home and abroad is unable to support the correction of manganese prices. Manganese plants plan to stop production and reduce supply in July.

In terms of price, as of July 1, the ex-factory price of spot resources from the main producing areas of electrolytic manganese in China has dropped by more than 600 yuan / ton since the beginning of June, and the average price is concentrated at 9900 million yuan / ton. Among them, the basic negotiations on retail spot resources in the manganese triangle region have fallen below the 10,000 yuan mark, and some parts of Guangxi have not had more spot quotations at the end of the month, and the overall delivery period order status is mainly maintained. In July, the month-on-month decline in the bidding price of metal manganese in some domestic steel mills is about 6003,850 yuan / ton, so it is difficult to be optimistic about the average spot price of electrolytic manganese in early July. From July to August, the overall overseas steel mills entered the summer break, according to some traders said that the atmosphere of overseas orders in July was light, and the basic futures price range was around 1430 U.S. dollars / ton, and the overall weak operation continued in the later period.

Looking back at the strong upward atmosphere of electrolytic manganese from April to May 2020, the shortage of domestic manganese triangle ore resources, the increase in operating rate and output in major areas, and the slight increase in the prices of raw materials such as 98% sulfuric acid and manganese carbonate ore due to the increase in demand. on the other hand, it is also due to the short-term suspension of production due to the environmental impact of large factories in Guizhou in early May, which coincides with the release of steel demand at home and abroad, and manganese prices are strong. Many operators said that in the off-season process of consumption in the downstream market, the sharp decline in supply brought about by the reduction and shutdown of factories may not be obvious in the short term to rebound manganese prices in the later period. 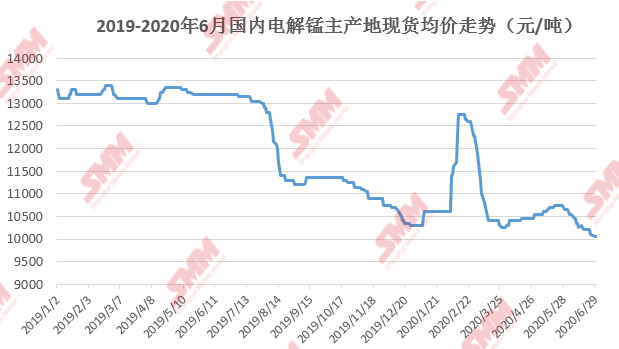 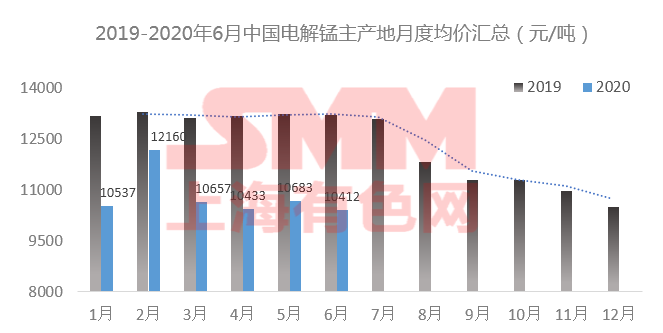 In terms of output and start-up, the output of electrolytic manganese in various regions of China in June 2020 decreased slightly compared with that in May, among which some manganese triangles and Guangxi region chose to stop production due to the serious upside-down of costs in mid-late June, and some manufacturers did not reach full production, so the overall operating rate also had a downward trend.

According to SMM research, the spot market price of electrolytic manganese has dropped to about 9900 yuan / ton by the end of June, and there are a large number of factories that have stopped production in the manganese triangle in July. According to SMM statistics, in July, the total output of electrolytic manganese in China may drop to about 100000 tons, but the specific total output is still dominated by the actual production of manufacturers in various regions.

Note: for more information about the start-up and Nissan production of manufacturers in various regions, please contact 021mur51666908 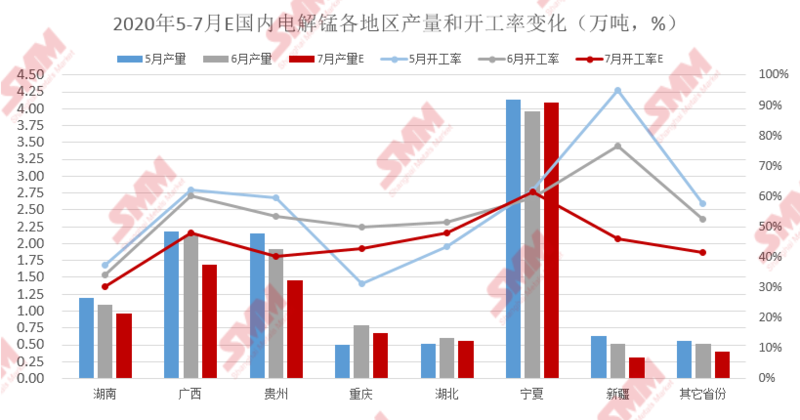 In terms of steel moves, as of July 1, the performance of metal steel moves at home and abroad in July is more pessimistic, although the purchase quantity of some pricing steel mills has increased month-on-month, but the price reduction range is basically 600 RMB800 / ton. South Korea Posco July Electrolytic Manganese bidding CIF Korea main port pricing at 1385 US dollars / ton, a month-on-month drop of 120 US dollars / ton, but the July purchase volume increased by 1745 tons from the previous month to 4196 tons, and delivered in late July. According to the current US dollar exchange rate, the factory price is about 9500 Mel 9600 yuan / ton. Baowu Group's July electrolytic manganese purchase, including tax acceptance, was priced at 10500 yuan / ton, a month-on-month decrease of 800yuan / ton, which made many operators continue to be weak about the manganese price in July. In addition, Xiangtan Iron and Steel, Angang, Nanjing Iron and Steel have not yet priced, later SMM will continue to pay attention to and update the market steel recruitment information.

As for the downstream 200series, by the end of June, the total stock of 200series cold and hot rolling in South China was about 17200 tons, which was about 5200 tons less than that at the beginning of June. At present, the market price of 200series cold rolling has remained stable as a whole, and the actual transaction price in Wuxi is 7300Mel 7400 yuan / ton, which is mediocre. Foshan area is basically stable under the guidance price of steel mills at the beginning of the month, but at the end of the month, most new goods arrive one after another, secretly promoting transactions. In addition, downstream demand is off-season, the operating rate is not high, and the export market is not growing significantly. SMM expects that the 200 series stainless steel in Sifo and Sifo will adjust and operate steadily in the near future.