In addition, recently, the top political and economic scholars in many countries have studied and judged the pattern of the post-epidemic world, and they all mentioned that the global industrial chain will be reintegrated. Their argument is that the fundamental impact of the new crown outbreak on the world financial and economic system is to raise awareness that global supply chain and distribution networks are extremely vulnerable. Globalization enables enterprises to organize production around the world and put their products on the market in a timely manner, thus reducing warehousing costs. If inventory is shelved for more than a few days, it will be considered a market failure. The supply is carefully designed to be procured and transported on a global scale. The new crown virus has proved to the world that pathogens can not only infect humans, but also destroy the entire real-time production system. Given the scale of the global losses in financial markets since February, companies are likely to emerge from the epidemic with a conservative approach to real-time production and global decentralized production. The result is that global capitalism is likely to enter a dramatic new phase: to avoid future damage, the supply chain will be closer to home and full of surplus.

So for the copper industry, will it also lead to a major change in the global industrial chain as a result of the epidemic?

First of all: let's take a look at the division of the copper industry chain: mainly divided into mining, smelting, processing and terminal requirements.

Secondly, the distribution of copper mines in the world: 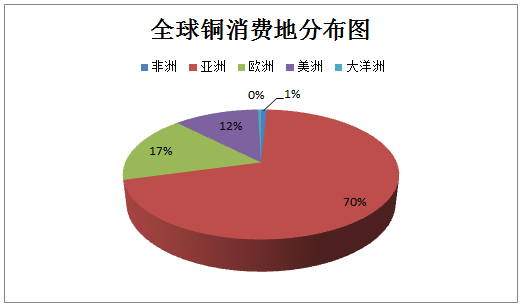 To sum up, there is a serious mismatch in the global copper industry chain, with mines mainly distributed in Latin America (45%), smelters mainly in Asia (55.9%), and consumption mainly in Asia (70.2%). At present, the main flow of the industrial chain is from Latin America to Asia, smelting and consumption in Asia. China needs to import large amounts of copper ore and electrolytic copper; the US smelting end can basically produce and sell itself (1.33 million tons of ore, 1.15 million tons of smelting and 1.81 million tons of consumption), but hundreds of thousands of shortfalls in consumption need to be imported from the rest of the Americas.

Because the global copper resources will not be excavated in a large number of places in the short term, the mining and consumption areas are quite far away, and the power system of the mining areas is relatively unstable, we believe that the flow of industries from the mining end to the smelting end will not change as a result of the epidemic. Some changes may occur at the consumer end, and a complete industrial chain of finished products from design to production will be closer to the place of consumption, among which China is beneficial to durable goods such as automobiles. Up to now, a small number of accessories are not produced at home but must be imported, and the possibility of building a factory in China will be greatly improved in the future. What is disadvantageous to China is that domestic exports of products such as household appliances will be affected by anti-dumping on the one hand and traffic disruptions on the other hand, so the probability of this part of production capacity coming out in the future is very high.

Overall, we believe that affected by the buttocks determine the head, as long as the main place of global copper consumption is still in Asia and China, the general flow of the global copper industry chain will not change, there will only be minor repairs.