SMM Iron and Steel, April 1, this week's mainstream market resources delivered a total of 105000 tons, down 9000 tons from 114000 tons last week. Affected by the upside down, Shanghai and Le from the volume of shipments remain low. Among them,

Tianjin market: 21000 tons of hot rolls arrived this week, an increase of 7000 tons over the previous month.

Table 1: summary of arrivals this week

This week, the volume of hot rolls in Shanghai and Tianjin continued to decline while the volume of shipments in Tianjin increased, mainly due to the sharp fall in futures and the spread of market panic. The phenomenon of selling goods at low prices by large households in Shanghai and Lecong has led to a sharp drop in spot prices in the two places in recent days. Tianjin, on the other hand, is better affected by the recovery of demand, traders can still support shipments, and the decline in spot prices is relatively narrow. To promote Shanghai, Le from the two places and the northern region continue to narrow the price gap. As of today, prices in the three places have been almost flat.

Figure 1: trend of price spread among the three places 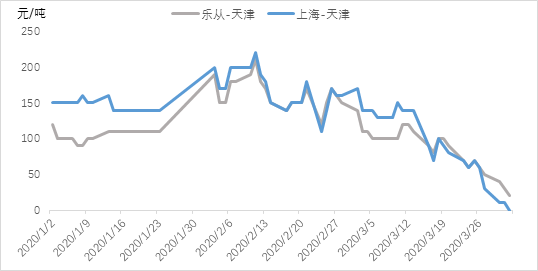 On the basis of this price difference, the hot coil resources of Northern Steel Plant are sent to Shanghai and Lecong is in the state of hanging upside down. Among them, Tangshan Steel Plant sent to Le from upside down 150-200 yuan / ton, sent to Shanghai upside-down hang 70-100 yuan / ton. As a result, on the one hand, the willingness of steel mills to go south was low, and on the other hand, traders left the resources of northern steel mills for sale in the local and surrounding areas, resulting in a reduction in the arrival of goods from both Shanghai and Lecong this week.

It is suggested that the current price difference between the three places is in an abnormal state, and the pressure on the supply of hot rolls may be alleviated as the volume of goods from Shanghai and Le decreases. The northern market Tianjin, Tangshan hot roll supply pressure may increase, when the market spot prices in the region will be suppressed.