CST
translation
Source:SMM
Abstract: two weeks after the return of National Day, the stock in the last period increased by more than 34000 tons, and the inventory increment in the fourth quarter of the country was significantly higher than that in previous years, and the accumulation time was ahead of schedule. In the last period of continuous accumulative pressure, why copper prices and spot sales have not been suppressed, copper prices have risen to recent highs instead?

After the return of National Day, the inventory continued to accumulate in the previous period. The weekly inventory data released on October 11 and October 18 increased by 16401 tons and 17790 tons respectively, and the total inventory increased by more than 34000 tons in two weeks. The domestic fourth quarter accumulation market time is more than half a month earlier than 2018, and the inventory increase is also significantly higher than 2018. In addition to the release of newly expanded production capacity of domestic smelters, import prices performed better before and after National Day, and a large number of imported copper imports entered the domestic market, which was also one of the reasons for the sharp increase in inventory in the previous period after the festival. 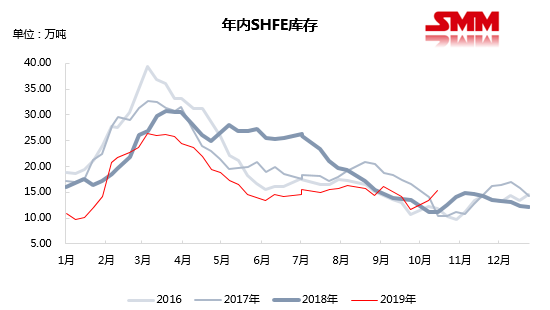 In the case of continued accumulation in the previous period, copper prices in Shanghai closed up for two consecutive days after the opening of the market this week, standing at the 47000 yuan / ton level and above all moving averages, copper prices showed good momentum. In addition, under the double pressure of higher copper prices and the accumulation of copper in the previous period, copper spot sales did not decline significantly and remained high. On Wednesday, Shanghai electrolytic copper spot was quoted as rising 30 ~ 80 yuan / ton for the current month's contract.

SMM believes that the current high copper prices are still dominated by the macro, in addition to the fundamentals also have good news to support copper prices higher. Brexit entered a critical period this month, British leader Johnson is eager to lead Britain to successfully complete Brexit at the end of the month and the new Brexit agreement has also been passed in the European Union, so the macro risk aversion has weakened, in addition, superimposed on the expectations of the Federal Reserve to cut interest rates again, the dollar has recently been in a falling range, so copper prices have taken advantage of the opportunity. In terms of inventory, although there has been a sharp increase in inventory for the last two weeks after National Day, if we combine the inventory in the previous period and the bonded warehouse inventory to see that the domestic inventory has not actually increased and is still at a low level, the increase in domestic spot pressure is not obvious. In addition, the disturbance news of copper raw materials continues, the domestic announcement of the fourth quarter of the first batch of imported scrap copper approval volume, the average enterprise approval volume is only 17% of the third quarter, the fourth quarter scrap copper shortage expected to heat up; superimposed from last Friday, Chile strike protest riots gradually intensified, the state of emergency has expanded to the main copper producing areas in the north, Escondida and Chuquicamata copper mine union have expressed solidarity with the protest activities, increasing the copper concentrate spot supply concerns. Interference from the supply end of copper has hit the confidence of short copper prices. Shanghai copper has reduced its short positions for two days in a row, which has also boosted the rise in copper prices. 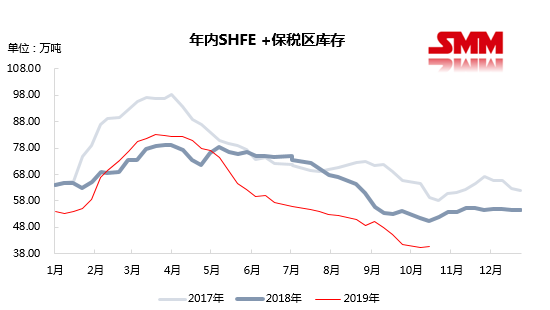 Although there have been multiple positive factors in the copper market to push up copper prices, but from the recent SMM research on the copper industry chain, statistics continue to rise does not seem optimistic. Domestic electrolytic copper production is expected to grow by about 2.5% month-on-month in October, and the year-on-year growth rate is also expanding. Superimposed October import profit window opened, import copper import opportunities, October market electrolytic copper supply shows more abundant. In addition, market consumption has not seen a big improvement, according to SMM's understanding of the start of copper downstream processing enterprises, copper operating rate in October compared with the same period last year fell 0.3%, month-on-month has not been repaired. 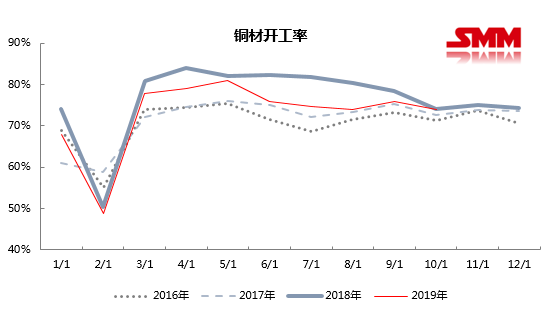 At present, although the quotation in the spot market of copper maintains a relatively high rising water, from the situation of the past two days, the rising water has shown a pullback trend, and the high rising water in the early stage is mainly driven by the demand for tax bills, which fails to reflect the actual market demand. After excluding this factor, the rising water has fallen back obviously. Macroscopically, it is certain that Brexit will be postponed again, and the global trade pattern has not yet seen good progress. In the environment of the global interest rate cut boom, the pattern of economic weakness has become clear. Therefore, in the short term, the motivation for copper prices to continue to rise is still insufficient, it is expected that under all kinds of pressure, copper prices still have room to fall back.