CST
translation
Source:SMM
China imported 212328 tons of refined copper cathode in June, down 30.8 percent from a year earlier and 12.6 percent from a month earlier, according to the General Administration of Customs website.

SMM7, 29 July: according to the website of the General Administration of Customs, China's import of refined copper cathode in June was 212328 tons, down 30.8 percent from the same period last year and 12.6 percent from the previous month. 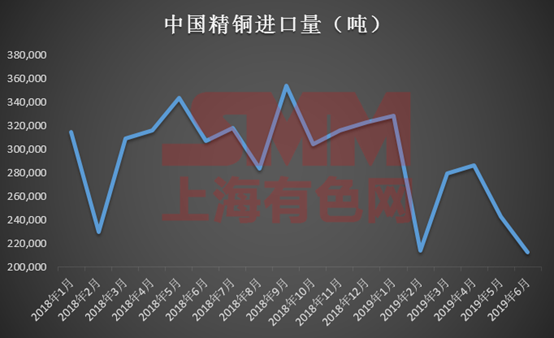 China's imports of refined copper fell sharply in 2019 compared with 2018. After a small increase in March and April, imports began to fall in May and continued to decline in June, the lowest in four months. To investigate the reasons, SMM believes that the expansion of new capacity of domestic smelters, import copper financing demand and domestic consumption are the main reasons.

First of all, the rapid expansion of domestic smelter capacity this year is expected to greatly increase the self-sufficiency rate of domestic refined copper and reduce the dependence on imported copper. SMM expects another 300000 tons of new production to be released in the second half of the year. In the face of weak consumption, the domestic supply is relatively sufficient and the demand for imported copper is small.

Although the import of refined copper increased month-on-month in March and April this year, it was mainly due to the seasonal recovery after the Spring Festival and a cumulative decline of about 5% from January to April compared with the same period last year. After the superposition, refined copper imports fell by about 30% in May and June compared with the same period last year, resulting in a cumulative decline of more than 14% in electrolytic copper imports from January to June compared with the same period last year. The decline in domestic supply and imports of copper in the second quarter also reflected the weakness of terminal consumption. In the case of weak consumption, with the gradual recovery of supply at the end of domestic maintenance, the pressure of domestic supply has increased significantly.

And the terminal consumption presents "the peak season is not prosperous" the situation has confirmed the market to the refined copper consumption ability. A total of 115.7 billion yuan was invested in power grid projects across the country from January to May this year, down 18.2 per cent from a year earlier, according to the China Power Union. Since the beginning of this year, the cumulative investment of the national power grid project has been showing a large decline, transmitted to the field of wires and cables, but also caused great pressure on copper consumption. Car sales showed a strong trend in June, but the main reason is that the "country five" to the "country six", domestic car dealers through a variety of promotional means to strongly digest the effect of the country's five inventory vehicles, can not reflect the improvement of terminal consumption.

In June, the centralized maintenance of smelters basically ended, the supply gap gradually narrowed, and the new expansion of production capacity began to have an impact on the market. At the same time, insufficient consumption also caused the domestic trade market not to import copper to fill the vacancy, and the financing attribute of copper was weakened. These factors led to a sharp decline in imports of refined copper in June from a year earlier.

SMM data collation, July copper spot import profits and losses have not been repaired, Yangshan copper premium prices also continue to maintain low operation, market demand weakness is becoming more and more serious. Judging from the SMM dollar copper mining price, the onshore supply of imported copper is tight, indicating that the amount of electrolytic copper imported in July will remain low. At the same time, because of the decrease in the landing of imported copper, it is also the main reason for the recent continuous decline of copper inventory in Shanghai bonded warehouse.