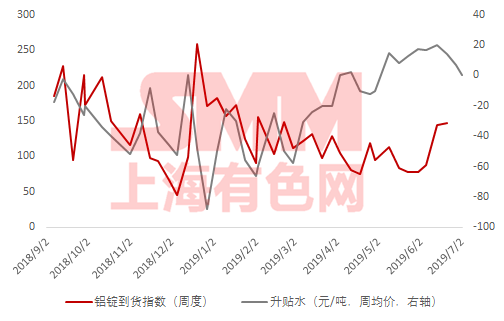 Well, on the other hand, the current aluminum ingot arrival index can be found that since early June, the arrival of aluminum ingots has picked up significantly, almost returning to the level of March. The corresponding aluminum ingot water has declined in recent days, and it may even continue to weaken in July.

In addition, the author observed that there was a peak of arrival of aluminum plate belt in May, and the arrival intensity once caught up with that of aluminum ingots. This phenomenon explains the reduction of roll-casting coil processing fees reflected by several plate and strip enterprises in June: generally, the processing fees of cast-rolling coils remain unchanged all the year round, but according to SMM research, enterprises in Jiangsu Province have responded to a 10% decline in the price of roll-casting coil delivery in June. In view of the fact that the arrival of aluminum strip quickly returned to the normal level, the author expects that the impact of the arrival of the goods on the price of roll-casting coil is relatively short.

Peak of arrival of aluminum plate and strip in May