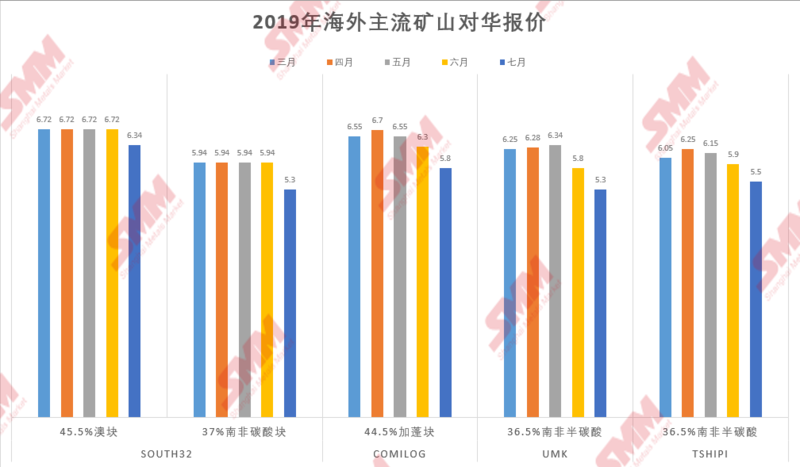 Compared with the average sales price of Tianjin Port Manganese Mine in May and June, the average price of imported manganese oxide ore is generally 0.1 to 1.9 yuan / ton below the cost line, and the lowest transaction price in the market is 0.6 to 2.4 yuan / ton below the cost line (although some large traders who have been cooperating for a long time in the market have signed preferential prices, but the actual preferential range is very small), coupled with miscellaneous charges such as port financial costs and contracting fees, The overall loss range is about 1 yuan to 3.1 yuan per tonnage, and some bulk ore traders in Gabon have revealed that the maximum loss has reached 3.4 yuan per tonnage, and the operation condition is very weak. Therefore, when quoting for overseas mines in July, it is difficult for major domestic traders to accept high quotations one after another. The UMK round of quotations of 5.78 yuan per tonnage is almost completely excluded by domestic traders. South32 and some Brazilian manganese ore prices have also gone through short-term negotiations before the dust has been settled, and the trade mentality of traders at this time has gradually become helpless and resistant in the market of falling prices in the past two months until losses. What is helpless is that the continuous high inventory of the port has dragged down the bargaining power of manganese ore traders and downstream. At the same time, the price of manganese alloy in the lower reaches is also falling in May. In addition to completing the normal delivery order, the alloy factory has little intention to accumulate. The low willingness of alloy production has led to the depression of spot purchase of manganese ore, and the maximum increase of manganese mine inventory in Tianjin Port reached 14.1% in May. The conflict is that under the condition of continuous loss, the concession range of overseas mines is not as good as psychological expectations, and most of the latest July quotations have just met the current sales average price. More importantly, due to the downward adjustment of futures quotations, the price of manganese mines in the downstream market continues to put pressure on the prices of manganese mines at this stage. However, at present, the port manganese mines are goods issued at the end of April and early May, and the cost is much higher than the futures price. Although it is resistant to continuing to depress the price, but from June 9, Some mine prices interrupted the low and stable market last week and continued to explore 0.5 yuan per tonnage.

SMM believes that at present, the supply of domestic imported manganese ore is in excess of demand, and it is difficult to change it obviously in the short term, but the following two points bring good benefits to the short-term support of manganese ore prices: first, according to some traders, futures shipments such as Brazil and Australia may decline, port stocks will continue to rise sharply, and second, the downstream alloy market is guided by the price of steel this month and the demand for silicon and manganese has increased. The start-up rate of silicon and manganese may increase slightly in June. However, in the medium to long term, as the terminal steel market will usher in short-term infrastructure and periodic adjustment of automobile consumption industry, the demand of steel market is difficult to predict. Alloy manufacturers mainly wait and see in the future, and mostly deal with zero inventory. The possibility of a substantial increase in silicon and manganese production in the short and medium term is smaller, and the elimination of manganese ore inventory is also more difficult.

At the same time, the production cost of manganese ore is an important factor affecting the price of manganese ore when the supply exceeds demand in the manganese market. According to the annual report of South32, the cost of manganese mine in Australia and CIF in South Africa in 2019 is about US $2.35 / tonnage and US $3.70 / tonnage respectively; according to the quarterly report data released by Jupiter, the cost of Manganese Mine CIF in South Africa in 2019 is about US $3.40 / tonnage. Although the profit level of overseas mines has been compressed by the recent increase in shipping costs, but its profit space is still large, the situation of strong bargaining power on overseas mines will also be weakened with the excess of national energy inventory, and the space for traders to negotiate still exists.

China EMM Market to Remain in Supply Surplus in 2018, SMM Foresees
In 2017, China’s EMM price changed from highs to lows. In 2018, China’s EMM market will remain in supply surplus.