China’s copper cathode output was 718,000 tonnes in November 2017, down 0.62% MoM and 7.65% YoY, according to SMM data. Output in the first ten months of the year totaled 7.2645 million tonnes, up 2.39% YoY. The output in November is lower than expectation mainly because Daye Nonferrous, Dongying Fangyuan and Zhongtiaoshan North Copper failed to reach expected output, In the meanwhile Shandong Humon Smelting and Qingyuan Jiangxi Copper did maintenance so the output was affected.

According to production plan of each smelters, most copper smelters will raise production obviously in order to pursue annual production aim in 2017, let alone the huge profits of copper concentrate, crude copper and processing fee pf anode plate. Besides, Huludao Hongyue North Copper launched its crude copper smelting project of 150,000 tons capacity in November, which is expected to release its refined cooper to the market in December. Concerning the 20-30% production limit of Tongling Nonferrous Group’s crude smelting capacity due to green policies, SMM learned the influence is light in the short term for its refined copper output. SMM will keep focusing on it due to its uncertain time of production limit plan.

Growth of domestic aluminium output in November continues to drop due to production limit plan in Henan, Shanxi and Shandong Provinces during winter season. The annualized output in November drops to 35.356 million tons. Besides, Huaren of China Aluminium, Huayun of China Aluminium went into operation and contributed some output. Since December, some capacity with high cost will do maintenance and growth of newly-increased capacity is slackened, so the overall operating capacity will drop slightly.

The output in December is expected to be 2.985 million tons, up 1.2% on yearly basis. What to be mentioned is up to Dec.4, domestic aluminium social inventory is as high as 1.768 million tons, the highest level in recent 10 years. Influenced by weakened downstream consumption in December, de-inventory of domestic alumina will be limited, SMM predicts.

The dramatic drop in November mainly come from implementation of production limit plan during winter season. Most alumina plants in Henan and Shandong Province started production limit since Nov.15 and finished on Nov.20, affecting alumina annual capacity of 5.09 million tons. Besides, Huajin Aluminium and Huafei Chemical in Guizhou Province dropped in their output due to supply of bauxite. Zongzhou Brach of China Aluminium cut down its operating capacity due to pressure of local government. Newly-increased capacity of Yunnan Aluminium added to its alumina output. The output in December is expected to drop further since the production limit plan works throughout the whole month whereas full operating capacity of Yunnan Aluminium and newly-increased capacity of Liulin Senze will add their capacity of alumina. SMM predicts the alumina output in December is 5.699 million tons, with daily output dropping further to 184,000 tons.

November see a slight MoM rise of output of smelting plants, mainly because Zhongjin Lingnan Nonfemet got resumed from maintenance and Luoping Zinc-power is  in steady rise production with suitable supply of water and power despite slight output drop of Mengzi Mining. Besides, some plants are in full or excessive capacity to pursue production aim lagging behind during previous months. Hence, in November smelters’ output recorded a new-high level within this year.

In December, Mengzi Mining will resume form maintenance and add to its production. However, Zhongjin Lingnan Nonfemet will do major maintenance at year-end and Hanzhong Zinc, Huludao Zinc as well as Shaanxi Dongling will reduce in output due to shortage of raw materials.

Henan Jiyuan Yuguang, Wanyang and Jinli were influenced by brownouts in December, with drop in output. Smelters in Yunnan are influenced by environmental protection, with blast furnace closed. South smelters in Hunan, Guangxi and Jiangxi Province also dropped in output due to short supply of lead concentrate. Other smelters keep stable.

For December, Zhongjin Lingnan Nonfemet is currently in maintenance with 1/3 drop in output and smelters in Henan Province will limit production by 20-30% for one month due to green polices. Smelters in Anhui and Hebei Province are also influenced by short supply of natural gas.

The main reason for increased production in November is that Jinchuan Group keeps bullish at nickel price in future and its output was increased by 1,700 tons to 13,000 tons compared with October due to production plan pursuit. In December refined nickel output of Jinchuan Group is estimated to reach 13,400 tons. Xinjiang Xinxin will resume production with estimated output of 960 tons.

SMM predicts refined tin output will reach 10,700 tons in December, down 15.8% on monthly basis, considering some suspended plants in Gejiu City will stop production for 2-3 weeks, which will influence half of the output in this region (except Yunnan Tin). 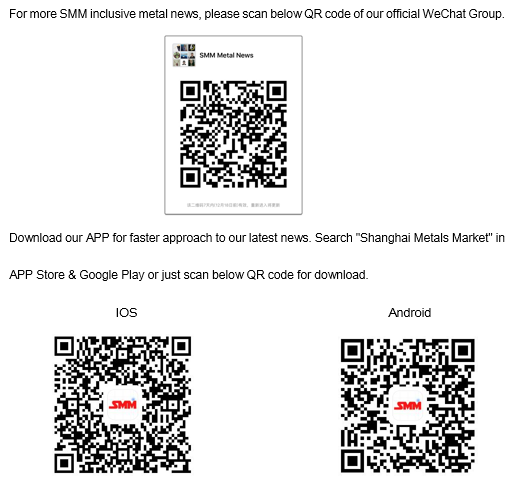 All
MOST POPULAR
1.SMM Review of Pre-Holiday Base Metals Market and Prospect
2.National Day Holiday Notice
3.CSPT Set the Spot Copper Concentrate TC in the Fourth Quarter at $93/mt
4.China Weekly Inventory Summary and Data Wrap (Sep 30)
5.SMM Morning Comments (Sep 22): Base Metals Closed Mostly with Losses amid Firm Rate Hikes in US
Shanghai Metals Market
Privacy PolicyCompliance CentreSMM Credit ServiceContact UsAbout UsTerms & ConditionsSitemap
Notice: By accessing this site you agree that you will not copy or reproduce any part of its contents (including, but not limited to, single prices, graphs or news content) in any form or for any purpose whatsoever without the prior written consent of the publisher.