CST
Source:SMM
In addition, although the proportion of aluminium ingots imported from Iran and Malawi in July and August was small, there is a sign of further growth. According to market feedback, there are still some Iran aluminium ingots in transport, which are expected to arrive soon. 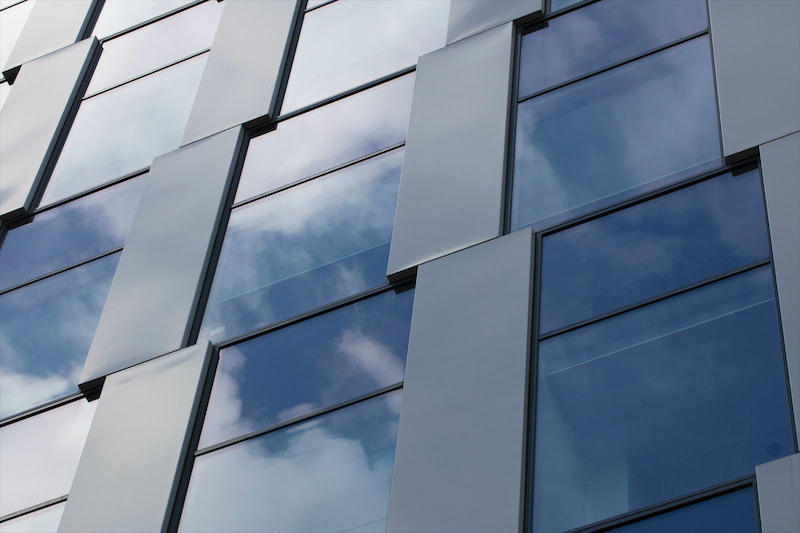 SHANGHAI, Sep 23 (SMM) - 2022 features high capacity utilisation rates among domestic aluminium smelters. Domestic aluminium smelters resumed work and production intensively in the first half of the year, and the total operating capacity has repeatedly hit historical highs. As a result, the domestic demand for overseas aluminium has declined significantly. Domestic aluminium semis production also achieved high growth under the stimulus of lucrative export profits and robust overseas demand. However, domestic and overseas aluminium supply is expected to encounter multiple disturbances, and the macroeconomy is also likely to remain volatile. How will the domestic export and import market of primary aluminium and aluminium semis respond to such situations?

Import and export of primary aluminium: 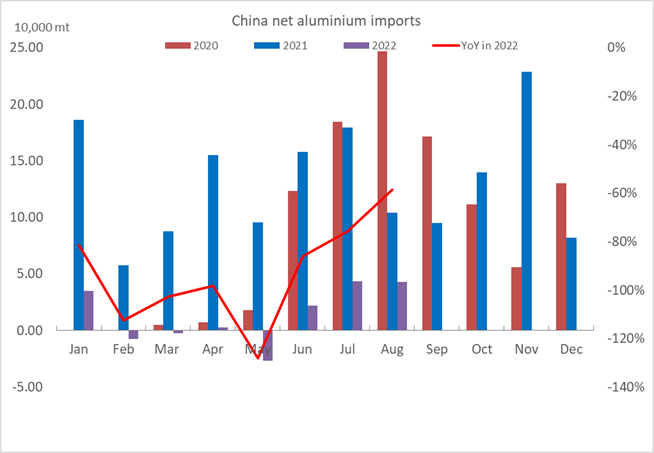 Judging from the country of origin in August, the imports still mainly came from the Russia with a volume of 42,000 mt, taking up 84.5% of China’s total imports. The imports from Russia stood at 231,000 mt for the first eight months in 2022, taking up 77.5% of the total, raking first among all the supplying countries to China. In addition, although the proportion of aluminium ingots imported from Iran and Malawi in July and August was small, there is a sign of further growth. According to market feedback, there are still some Iran aluminium ingots in transport, which are expected to arrive soon.

SMM attribute the inflow of Iran aluminium ingots to the following two reasons: ① Iran has expanded its aluminium capacity in 2022. According to the data of the Iranian Mining Development and Innovation Organization, the production of aluminium ingots in Iran totalled 538,600 mt throughout Iranian calendar year 1400, a year-on-year increase of 20%. Among the four major producers in Iran, Iran Aluminium Corporation ranks first, which produced 177,000 mt of aluminium ingots. Currently, Iran is the 18th largest aluminium producer in the world. Iran plans to reach the goal of producing 1.5 million mt of aluminium ingots annually by Iranian calendar year 1404 (March, 2025 - March, 2026). ② Overseas demand in Europe and other countries has deteriorated, and local companies have been seeking better sales channels. 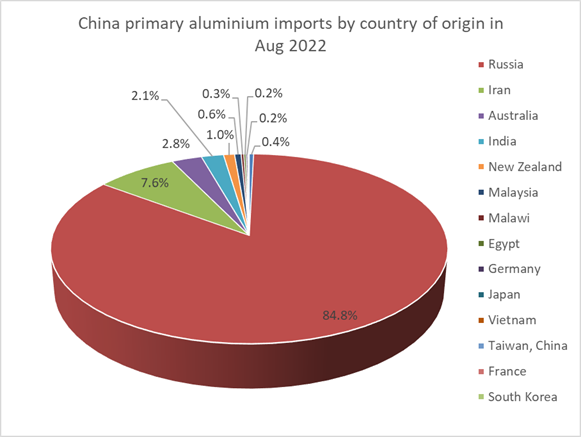 SMM believes that the MoM declines in the export volume are mainly due to the following causes:

① The high inflation in Europe and the United States continues to inhibit local demand, including aluminium semis and other products.  For example, according to relevant news, cars in Europe and other regions are affected by the shortage of key components and chips, and the operating rates of the auto industry have declined. Some factories are reducing car production and waiting for the supply of chips. 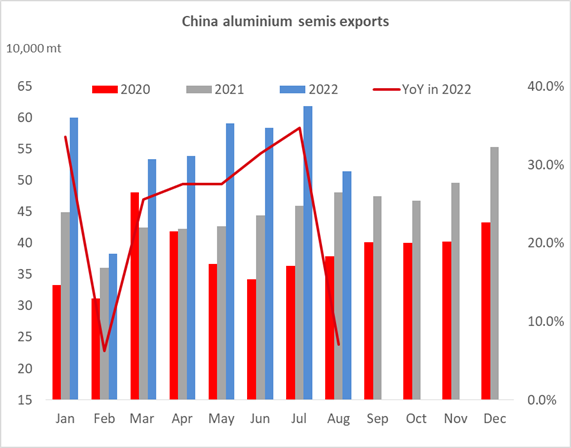 SMM Comments: In September-December, the domestic aluminium prices are likely to rise amid production cuts in Sichuan and Yunnan province. Meanwhile, overseas aluminium prices are constrained by macroeconomic recessions such as interest rate hikes in Europe and the United States. The SHFE/LME price ratio will rebound, paring the import loss of overseas aluminium ingots. Some low-priced Southeast Asia aluminium may flow into China. And according to foreign media, due to difficulties in finding buyers, Rusal is working on a plan to deliver aluminium directly to the LME warehouses in Asia. This may allude subsequent increase in the amount of Rusal aluminium ingot entering China. It is expected that in the future, domestic primary aluminium will maintain a positive value in net import volume with continuous growth. SMM estimates that the total net import of primary aluminium from September to December may reach 200,000 mt, and the net import volume throughout the entire year may stand at around 310,000 mt, a decrease of nearly 80% year-on-year.

In terms of aluminium semis, the export volume has increased significantly in 2022. But the export orders have been lacklustre amid poor overseas demand, according to the manufacturers. Nevertheless, the overseas aggressive interest rate hike is expected to come to a halt, and the total production reduction of European aluminium smelters has been too significant to be supplemented by primary aluminium from Russia and other sources. Therefore, overseas demand will need to be filled up with the exports of Chinese goods.  However, compared with the first half of the year, the export profits of aluminium semis may continue to fall, which also suppresses the export volume. SMM predicts that domestic aluminium semis exports will maintain a year-on-year increase from September to December, but the growth may slow down.