CST
Source:SMM
SHANGHAI, Aug 16 (SMM) - On August 15, the Sichuan Provincial Department of Economy and Information Technology and the State Grid Sichuan Electric Power Company jointly issued the Emergency Notice on Expanding the Scope of Cutting Off Electricity Supply to Industrial Enterprises in Favour of Residents.

SHANGHAI, Aug 16 (SMM) - On August 15, the Sichuan Provincial Department of Economy and Information Technology and the State Grid Sichuan Electric Power Company jointly issued the Emergency Notice on Expanding the Scope of Cutting Off Electricity Supply to Industrial Enterprises in Favour of Residents. The notice pointed out that due to recent large-scale and long period of extreme high temperature weather that has not been seen in 60 years, the ongoing drought has led to a sharp decline in hydropower generation capacity, and the current power shortage situation has further intensified. Starting from August 15, the staggered power use shall be cancelled, and the implementation scope of cutting off electricity to industrial enterprises in favour of residents will be expanded in 19 cities (prefectures) in the province (except Panzhihua and Liangshan). All industrial power users who are included in the Sichuan Power Grid Orderly Power Use Programme (including whitelisted key security enterprises) shall stop production (except for security loads). This will take effect from 00:00 on August 15, 2022 to 24:00 on August 20, 2022. All localities should immediately notify enterprises to make production adjustments and implement this policy immediately.

SMM survey found that this round of power rationing in Sichuan has affected many lithium salt, ternary material, lithium iron phosphate, and graphitization enterprises.  While some companies are still trying to negotiate with the local government for alternative measures such as off-peak production so as to avoid an outright shutdown, most producers have officially entered a 5-day closure from 00:00 on August 15.  Considering that some production lines, such as NMC materials and LFP, need a certain amount of time for the kiln to heat up after being cooled, some producers said that this round of power rationing will actually disrupt 7-8 days of their production.

According to SMM statistics, this round of power rationing is expected to lead to a reduction of 1,120 mt of lithium carbonate, 1,690 mt of lithium hydroxide, 500 mt of MNC materials, 5,200 mt of lithium iron phosphate, and about 300 mt of graphitization in August. On the whole, the ongoing power rationing mainly involves large NMC material and lithium iron phosphate factories. Although some manufacturers are still negotiating with the government, which means the actual impact will need reassessment, the cuts in battery material production is estimated to be bigger than the reduction in lithium salt supply.  And considering the current situation of power supply this year, the power rationing may be extended, thus the actual impact could potentially expand. The power rationing came at a time when some battery material makers are now beginning to stock up raw materials for use in the second half of the year and when lithium carbonate supply is starting to tighten. SMM expects that the lithium carbonate supply tightness will be alleviated and stocking by NMC material and LFP producers will slow down.

SMM will continue to keep a close eye on how the power rationing will evolve and its impact. 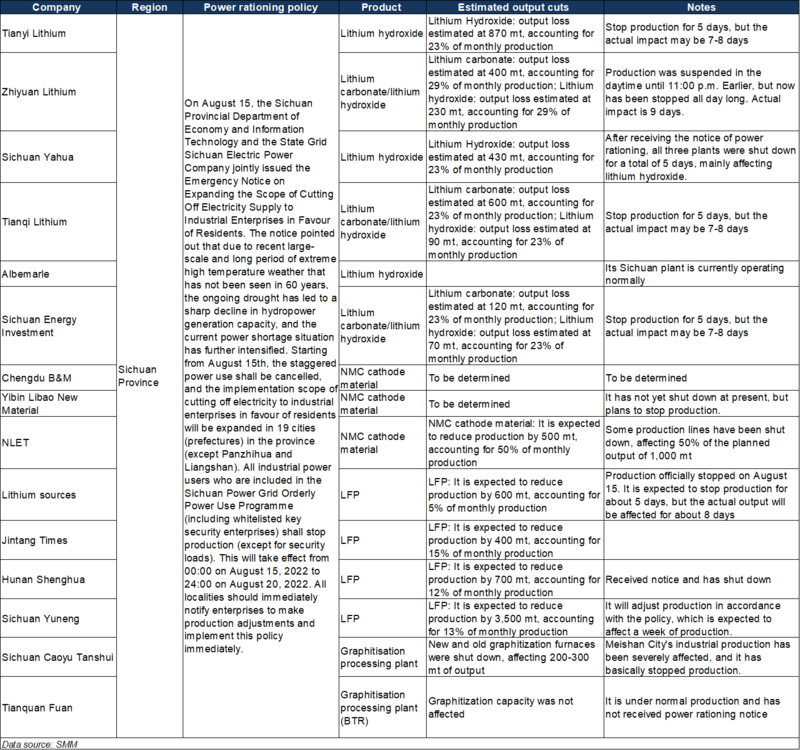 All
MOST POPULAR
1.World’s First Automated Lithium Metal Battery Production Line in Operation!
2.Yellow Phosphorus Enterprises in Yunnan Subject to Production Curtailment or Suspensions from September 2022 to May 2023, Long-Term Fundamentals Remain Bullish
3.SMM Review of Pre-Holiday Base Metals Market and Prospect
4.Price and Forecast for Lithium-related Battery Materials
5.Squeezed Recycling Profitability amid Rising Lithium Battery Scrap Price Calls for New Pricing Scheme - SMM Scrap Price Calculator
Shanghai Metals Market
Privacy PolicyCompliance CentreSMM Credit ServiceContact UsAbout UsTerms & ConditionsSitemap
Notice: By accessing this site you agree that you will not copy or reproduce any part of its contents (including, but not limited to, single prices, graphs or news content) in any form or for any purpose whatsoever without the prior written consent of the publisher.