CST
Source:SMM
In general, the prices of PrNd alloy will move between 0.85-1 million yuan/mt in the next five years amid widening supply deficit, and are likely to volatile along with market sentiment.

SHANGHAI, Nov 19 (SMM) - The supply and demand of PrNd products in 2021 have been in a tight balance as a whole, with PrNd oxide supply totalling 70,000 mt, which was merely able to meet the demand of 69,000 mt. However, the supply became insufficient in autumn and winter due to multiple factors including power rationing.

However, the growth of rare earth ore mining quota has been limited due to palpable environmental damages as well as policy control of resources with strategc importance. Hence, doesmitc mining has been increasingly unable to meet downstream demand, and more separation plants have to rely on imports.

In 2021, domestic imports of rare earth ore were 80,000 mt; among them the imports of light rare earth from the US stood at 56,000 mt, and the imports of mid to heavy rare earth from Myanmar totalled 24,000 mt, both of which equal to 18,000 mt of PrNd oxide, a proportion of 25.7% of the total supply in China. Currently, the production of the MP mine in the United States and the Lynas rare earth mine in Australia is close to full capacity, thus there is limited room for growth in imports. What’s more, the supply of foreign rare earth ore reduced as Myanmar closed its customs since July due to the spreading COVID.

Meanwhile, the supply in south China have been reduced as the operating rates of some separation plants were lowered by 30 - 40% amid power rationing in Jiangsu, Guangdong, Zhejiang and Jiangxi as a result of coal shortage approaching the winter, as well as other factors like the environmental protection-related production restriction. Therefore, the supply of PrNd products has been unable to fulfil the market demand in Aug-Dec.

The prices of raw ore have been on the rise due to short supply of ore, while the power rationing has pushed up the prices of auxiliary materials, squeezing the profits of separation plants. The supply and demand imbalance intensified after some manufacturers had to reduce their production to contain losses.

In other words, the increases from the mine side will be quite limited. While the domestic recycling market, on the contrary, posts immense potential and great prospect. The supply of PrNd oxide from scraps accounted for about 30% of the total market. In the first three quarters of 2021, around 17,000 mt of PrNd oxide came from neodymium iron boron (NdFeB) scrap. The production capacity of some large domestic recycling companies will stand at 15,000 mt by 2025, and the average annual growth rate is expected to be 44% in the next five years. It will take up around one-third of the entire scrap market, and the average growth rate of the scrap recycling industry will reach 14.6%. In other words, the supply of PrNd oxide from scraps will total 31,000 mt by 2025.

On the demand side, the overall demand for PrNd products from high-end magnetic materials sector has increased in 2021. It is estimated that the total demand for high-end NdFeB in 2021 will stand at 75,000 mt, which is equivalent to 31,090 mt of PrNd oxide. 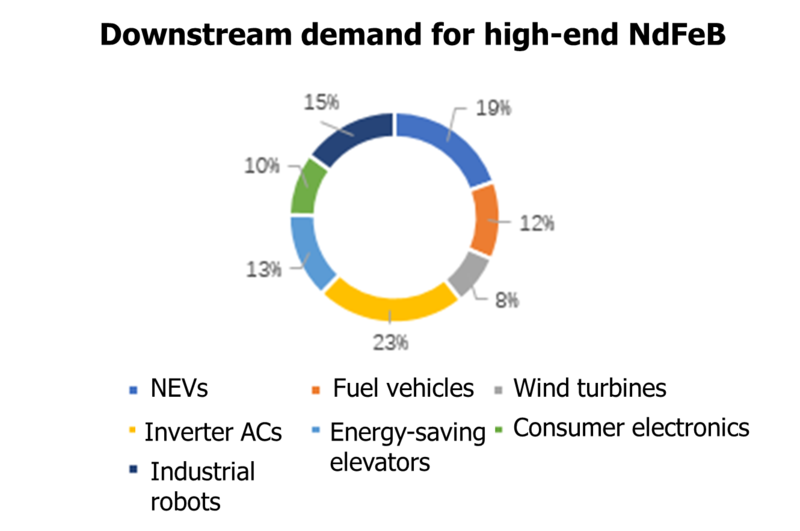 Among them, downstream NEV sector’s demand accounts for 16% of the total downstream industrial demand, becoming the largest consuming sector. In the first three quarters of 2021, the NEV sector consumed a total of 7,321 mt of high-end NdFeB. And based on the compound growth rate of 13% in the previous three quarters, it is estimated that the output of NEVs in 2021 will reach 3.36 million units. And its total demand for high-end NdFeB will be 12,000 mt throughout 2021.

At present, the domestic NEV market’s penetration rate is less than 20%, and there is huge room for future development. With the evolving concepts regarding energy saving and emission reduction as well as the rapid development of battery technology, the costs of NEVs have been controllable, hence the prices are gradually declining. The NEV sector has ushered in a period of rapid growth. The compound annual growth rate of domestic NEVs output from 2018 to 2021 is 38%, and it is estimated that by 2025, the CAGR will exceed 40%. It is predicted that the CAGR will reach 45% in the next five years, and the total output of NEVs will total 16.98 million units by 2025, equivalent to a total demand of 57,000 mt of high-end NdFeB.

The downstream wind turbines account for 8% of the demand for high-end NdFeB. It is estimated that the installed capacity of wind power will reach 21GW in 2021, and the high-performance NdFeB per unit installed capacity is 695kg/MW, equalling to 5,000 mt of high-end NdFeB. The compound growth rate in the next five years is expected to increase from 36.2% to 40% driven by the carbon peak goal to be achieved by 2030. The installed wind power capacity will reach 82GW by 2025, hence its demand for high-performance NdFeB will grow to 23,000 mt as well.

The market penetration rate of energy-saving elevators has exceeded 85%, and the growth rate is also slowing down. The market penetration rate is expected to reach 87% by 2025. The acceleration of urbanisation in the future and the recovery of real estate investment will boost the growth of elevator production. It is expected that the compound annual growth rate in the next five years will be 25%. By 2025, the elevator output will reach 3.82 million units, and the demand for high-performance NdFeB will reach 20,000 mt.

In terms of other downstream demand, although the output of mechanical hard drives and traditional TV sets has been shrinking year by year, and the annual output has achieved negative growth in the past four years, the increase in the output of personal computers has driven the growth in the overall demand for NdFeB by consumer electronics. This part of demand will increase to 6,000 mt by 2025. The compound annual growth rate of industrial robots is estimated to be 21%. With the transformation and upgrading of industrial manufacturing, the demand for industrial robots has increased significantly. Each industrial robot uses an average of 25kg of high-end NdFeB. Hence by 2025, the demand for high-end NdFeB will reach 20,000 mt.

The supply of PrNd oxide raw ore has been slow in growth and is unable to match the high-speed growth of downstream demand. The scrap recycling market has a bright future and is likely to become the largest supply growth engine.

In general, the prices of PrNd alloy will move between 0.85-1 million yuan/mt in the next five years amid widening supply deficit, and are likely to volatile along with market sentiment.

Rare Earth Prices Likely to Trend up in October amid Shortage of Energy 【SMM post-holiday review】
The prices of many rare earth products rose under the influence of the power rationing right before the National Day holiday. The transaction prices of PrNd oxide once reached 600,000 yuan/mt, and the transaction prices of PrNd alloy rose slightly, touching 750,000 yuan/mt with credit. Spot medium and heavy rare earth oxides such as terbium oxide and dysprosium oxide are even harder to find. Some holders quoted up to 9 million yuan/mt for terbium oxide, 2.75 million yuan/mt for dysprosium oxide. The prices of other products such as holmium, gadolinium, and yttrium-erbium also rose slightly. However, the trading activity of the entire rare earth market was muted due to sluggish downstream demand.

China Rare Earth Exports Fell in July and Prices Rose, What is the Driving Force?
China rare earth exports in July stood at 3955 mt, down 1.4% month on month but surged 144.2% year on year according to the General Administration of Customs. The average export prices was $16460/mt, up 23% month on month and 5% year on year. The export volume totalled 1620 mt in the same period of last year.

MOST POPULAR
1.Exclusive: China's Metals Output in December
2.Rare Earth Supply Tightness May Intensify after CNY Holiday
3.Review of Rare Earth Market in 2021
4.Supply and Demand of PrNd Products both Rose in December
Shanghai Metals Market
Privacy PolicyCompliance CentreSMM Credit ServiceContact UsAbout UsTerms & ConditionsSitemap
Notice: By accessing this site you agree that you will not copy or reproduce any part of its contents (including, but not limited to, single prices, graphs or news content) in any form or for any purpose whatsoever without the prior written consent of the publisher.