CST
Source:SMM
Operating rates of blast furnaces at steel mills fell 0.91 percentage point on the week and 0.65 percentage point from a month ago to 80.25% as of September 15, SMM survey showed.

SHANGHAI, Sep 15 (SMM) — Operating rates of blast furnaces at steel mills fell 0.91 percentage point on the week and 0.65 percentage point from a month ago to 80.25% as of September 15, SMM survey showed.

According to the data released by the National Bureau of Statistics, China's crude steel output from January to August totalled 733.02 million mt, an increase of 44.13 million mt or 5.3% year on year.

Supply is expected to tighten further in Q4 2021 under the recent production restriction policies.

The overall macroeconomic data declined compared to the previous month in August, and the steel demand from important downstream industries such as real estate and automobiles declined.

Steel demand is limited in the short term due to the pandemic in Fujian and Typhoon Chanthu, and the prices fluctuated. However, steel prices are expected to keep rising amid strict production restrictions after the impact of pandemic and weather is lifted, and downstream demand rebounds. 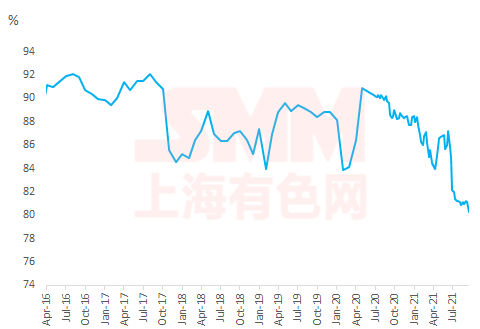 [SMM analysis] Interpretation of the Staggered Production in Beijing-Tianjin-Hebei and Surrounding Areas
The General Office of the Ministry of Ecology and Environment under the Ministry of Industry and Information Technology issued a notice on September 30, requiring staggered production of the steel industry in the heating season of 2021-2022 in Beijing-Tianjin-Hebei and surrounding areas (the “Notice”).

Blast Furnace Operating Rates Fluctuated Rangebound
The operating rates of blast furnaces at steel mills fell 3.65% on the week and 4.5% from a month ago to 76.6% as of September 22, SMM survey showed. Increasing plants in Jiangsu and Shandong reduced or suspended production. The operating rates are expected to fluctuate rangebound.

Operating Rates of Blast Furnaces Up 0.2% on Week
Operating rates of blast furnaces at steel mills grew 0.2% on the week and 0.1% from a month ago to 81.2% as of September 2, SMM survey showed. Blast furnace operating rates rose slightly this week and was generally stable, and is expected to fall mildly in the following week amid more blast furnace maintenance

All
MOST POPULAR
1.SMM Review of Pre-Holiday Base Metals Market and Prospect
2.Global Iron Ore Shipments Maintained Significant Increase in the Week Ending September 25
3.MMi Daily Iron Ore Report (September 22rd)
4.China Rebar Stocks down 1.4% on Week
5.China Rebar Stocks down 8.5% on Week
Shanghai Metals Market
Privacy PolicyCompliance CentreSMM Credit ServiceContact UsAbout UsTerms & ConditionsSitemap
Notice: By accessing this site you agree that you will not copy or reproduce any part of its contents (including, but not limited to, single prices, graphs or news content) in any form or for any purpose whatsoever without the prior written consent of the publisher.