CST
Source:SMM
Operating rates of blast furnaces at Chinese steelmakers inched up this week and stabilized at low.

SHANGHAI, Aug 13 (SMM) — Operating rates of blast furnaces at Chinese steelmakers inched up this week and stabilized at low.

An SMM survey showed that the average operating rate of BFs at steel mills in China edged up 0.2% from the prior week and inched down 0.1% on the month to 81.3%, the first slight increase in two months, and basically stabilised at low. 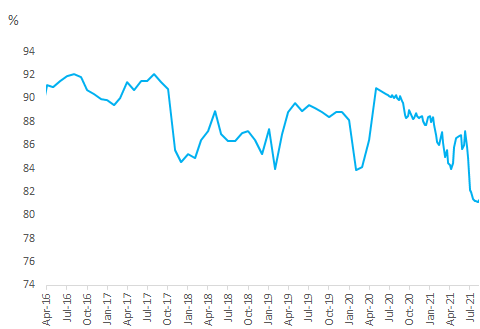 In order to meet the national target of cutting down crude steel output, a number of measures were carried out including strict re-inspections on capacity cut to prevent resumed operation of overcapacity. The implementation is likely to intensify as the heating season approaches.

Currently, actual demand of steel is generally low with lacklustre transactions. While the demand has bottomed out entering August, the apparent consumption of rebar and HRC has rebounded accordingly. Steel demand from the mainstream downstream sectors also showed some resilience.

Infrastructure investments will pick up further on the back of accelerated issuance of special bond, and is expected to offset the influences from weakening investments in real estate. Meanwhile, the production and sales scenario of vehicles, home appliances and mechanics are all expected to improve in September.

In general, steel demand will remain resilient against the cut-down on crude steel output, supporting the steel market to hover at a comparatively high level in 2H.

[SMM analysis] Interpretation of the Staggered Production in Beijing-Tianjin-Hebei and Surrounding Areas
The General Office of the Ministry of Ecology and Environment under the Ministry of Industry and Information Technology issued a notice on September 30, requiring staggered production of the steel industry in the heating season of 2021-2022 in Beijing-Tianjin-Hebei and surrounding areas (the “Notice”).

Blast Furnace Operating Rates Fluctuated Rangebound
The operating rates of blast furnaces at steel mills fell 3.65% on the week and 4.5% from a month ago to 76.6% as of September 22, SMM survey showed. Increasing plants in Jiangsu and Shandong reduced or suspended production. The operating rates are expected to fluctuate rangebound.

Operating Rates of Blast Furnaces Down 0.91% on Week
Operating rates of blast furnaces at steel mills fell 0.91 percentage point on the week and 0.65 percentage point from a month ago to 80.25% as of September 15, SMM survey showed.

Operating Rates of Blast Furnaces Up 0.2% on Week
Operating rates of blast furnaces at steel mills grew 0.2% on the week and 0.1% from a month ago to 81.2% as of September 2, SMM survey showed. Blast furnace operating rates rose slightly this week and was generally stable, and is expected to fall mildly in the following week amid more blast furnace maintenance

MOST POPULAR
1.China Steel Exports Dropped Further in July, While Imports Record New Low
2.Stainless Steel Prices Remained Weak despite Narrow Rebound amid Oversupply of Ferrochrome and Indonesia NPI
3.Iron Ore Prices Rose for Seven Consecutive Days amid the Game between Fundamentals and Expectations
4.Iron Ore Prices to Remain Volatile in the Short Term, with Eyes on Demand
5.China HRC Stocks Down 61,700 mt on Week
Shanghai Metals Market
Privacy PolicyCompliance CentreSMM Credit ServiceContact UsAbout UsTerms & ConditionsSitemap
Notice: By accessing this site you agree that you will not copy or reproduce any part of its contents (including, but not limited to, single prices, graphs or news content) in any form or for any purpose whatsoever without the prior written consent of the publisher.