Aluminium wire and cable segment saw higher operating rates, driven by delivery to the State Grid. Domestic aluminium wire and cable consumption will increase further, based on the current tender volumes from State Grid and short-term demand from power grid construction. Productivity of leading enterprises in Guangdong and Hunan increased thanks to the transfer of orders from small and medium-sized enterprises, who were affected by power curtailment. Operating rate in Inner Mongolia declined slightly. May remains as the peak season for downstream aluminium sectors, except for the alloy sector. Aluminium prices fluctuated around 18,350 yuan/mt, easing cost pressure for processors. Orders from end-users have increased. Market focus will be the impact of industrial power curtailment and high temperature on aluminium processors. 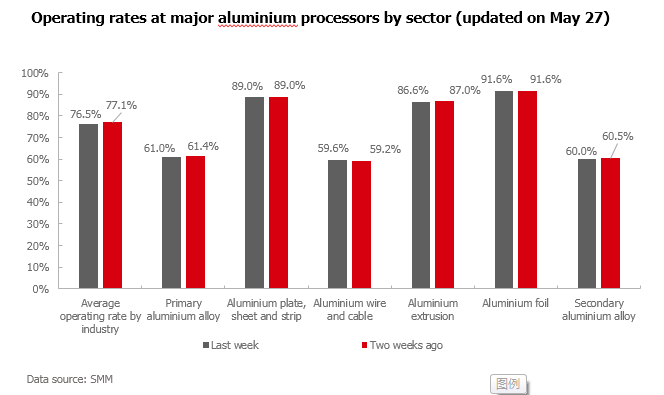 Aluminium wire and cable: Operating rate remained stable. Aluminium prices fell to around 18,300 yuan/mt, easing cost pressure of wire and cable enterprises. Large producers have tighter production schedules, and some plan to increase production next month. Low inventory of finished products and delivery to the State Grid supported operating rate. Some small and medium-sized producers in Guangdong were affected by power shortages. There is no power curtailment in East China.

Aluminium extrusion: Operating rates at major aluminium extrusion producers dropped slightly. Orders at large producers remained strong. Production at large producers is expected to remain high in June on the back of strong demand from real estate and infrastructure sectors. Projects involving infrastructure and improvement of people’s livelihood will also generate some new orders. In terms of industrial extrusion, demand from automobile and home appliance sectors was strong in May, and orders from photovoltaic and communication base stations were also strong. Raw material purchase declined as orders at some small and medium-sized enterprises decreased significantly and as some producers in Guangdong took a 3-day break every week due to power curtailment. Downstream customers took delivery of cargoes at a much slower pace due to unstable aluminium prices, causing inventory of finished products to grow at some enterprises.

SMM survey on the impact on primary aluminium alloy industry from automaker shutdowns caused by chip shortage
Volkswagen announced in March that it had cut production by more than 100,000 vehicles in January and February due to the lack of chips. Honda Motor announced that its Mexican plant would cease production from March 18. General Motors announced the temporary closure of its plant in Lansing, Michigan, and it was expected that it would not restart operations before April this year.