CST
translation
Source:SMM
[SMM analysis] Lun copper inventory is falling non-stop! The cancellation of warehouse receipts accounts for a high proportion of hovering LME back structure can be expanded again? 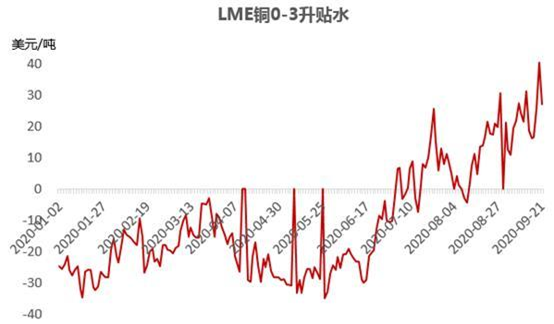 The logic behind the strength of overseas spot is mainly the recovery of demand. The manufacturing industry in Europe and the United States has gradually recovered since the unsealing of the epidemic, and the consumer demand for copper has increased. In the same period, the supply side of electrolytic copper is constantly disturbed, and both supply and demand support the spot on the strong side.

The rapid elimination of inventory is also confirmed. In the first half of this year, affected by the epidemic, LME copper stocks showed a step-by-step increase. Lun copper inventories have been removed more smoothly since mid-June, falling continuously from around 248000 tonnes, while LME copper inventories are now down to 77000 tonnes, a decline of nearly 70 per cent. And the proportion of warehouse receipts cancelled remains high, more than 60%. The proportion of low inventory superimposed high write-off warehouse receipts continues to strengthen spot tight expectations.

However, SMM believes that the possibility of another significant expansion of spot rising water is not high, mainly due to:

The rebound in overseas epidemics has added downside risks to the economy. In the context of weakening economic stimulus policies, the manufacturing recovery may not be able to continue the early momentum, and the growth momentum of copper consumption will be reduced.

LME inventories have recently shown a stabilization at the bottom and a slight rebound. Total LME inventories recorded a relatively low of 77000 tons as of Sept. 23, up slightly from 73000 tonnes on Sept. 9. At present, the domestic demand for US dollar copper is very low, and the Yangshan copper premium has fallen to the lowest level of the year, and the "delivery position" in the market is expected to heat up. Some traders said that if the premium continues to decline, some of the electrolytic copper originally sent to China may be transferred directly to the LME warehouse, so it is slightly difficult for LME 0-3 to re-rush the strong back structure.

Global base metals in deeper deficits in Jan-Nov 2017
Nonferrous metals saw more deficits from January to November 2017 compared to the same period in 2016, according to a release from the World Bureau of Metal Statistics (WBMS).