SMM announced today that the weekly inventory of domestic electrolytic aluminum is 6000 tons. Except for a slight increase in inventory in Shanghai, there is still no obvious trend of inventory accumulation in other areas. Among them, the inventory of aluminum ingots in East China (Shanghai, Wuxi and Hangzhou) is 425000 tons, and that in South China (South China Sea) is 174000 tons. The inventory ratio in East and South China is 2.44, which is much lower than the high value of 6.53 at the beginning of 2018 and slightly higher than the low value of 1.43 at the end of October 2019. The average inventory ratio since 2017 is 3.27, and the current ratio is on the low side. Inventories in southern China have increased by more than 20,000 tons since their low at the end of June, while inventories in eastern China have declined steadily over the same period. Most of the inventory increases in southern China come from the transfer of imported aluminum ingots from ports to public warehouses. The continuous upside-down spot price difference between the two places will reduce the southward supply of goods from the north, and the space for the price difference between the two places to continue to expand in the short term is limited, and the follow-up is expected to gradually narrow to near Pingshui. 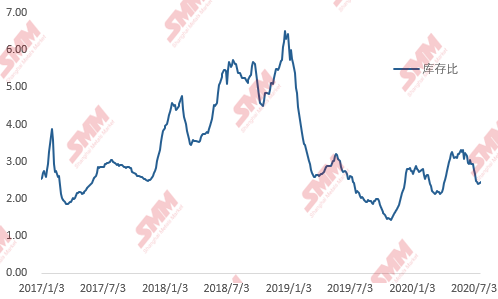