SMM7 March 13: at the 2020 (Fifth) China International Nickel-Cobalt-Lithium Summit Forum and China International Conference on New Energy Lithium Materials held by SMM, Hu Jian, vice president of Shanghai Nonferrous Network, explained the opportunities and challenges faced by the new energy industry. He said that China has completed overtaking around the corner in the context of lack of resources and has become a pearl in the global new energy industry chain. The global new energy industry chain is characterized by medium concentration of ore and battery end, relatively scattered smelting and material end industries in the middle position, low gross margin, overcapacity and so on.

At present, the results of the extensive development of China's new energy industry chain include four aspects:

1. Capacity expands quickly and there is a rapid surplus. With the rapid expansion of production capacity, China has rapidly become a major producer of smelting products and battery materials in the world, but the capacity utilization rate has been much lower than that of foreign countries for a long time. 2. The capital investment is large but the return is not high. Take the nickel sulfate industry as an example, except for a few head companies, many companies invest a large amount of money, but their operating income is low.

3. The product range is complete but the structure is not excellent. Although China has a wide variety of cathode materials, the proportion of high-nickel materials with higher technical barriers is still much lower than that of Japan and South Korea.

4. Get into trouble because of a weak sense of crisis. Some enterprises ignore the law of market development, invest blindly and expand production, resulting in economic losses.

The direction of cautious investment 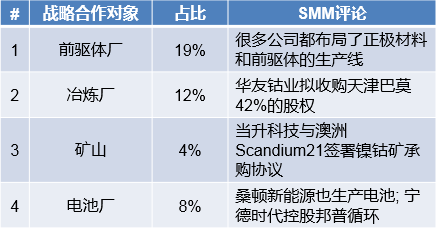 Technology drive leads the development direction: take the power battery as an example, the current ternary and lithium iron phosphate compete with each other, give play to their respective advantages in their respective areas of expertise, and occupy a certain market share respectively. The high nickelization of ternary materials can not only reduce the application of high-cost cobalt, reduce the cost and increase the energy density, but also make great progress after solving the safety problem. solid-state batteries and other batteries such as manganese-rich lithium-based batteries have better energy density and safety performance, which will lead the new direction of power batteries after the realization of large-scale commercial production. Usually, the output of the enterprise is proportional to the R & D cost. Among the precursor enterprises, Greenmei has the highest R & D cost and the largest output; Xiamen tungsten and Hunan fir have higher R & D costs and smaller output, mainly because there are many kinds of products, and the precursors are not their main products.

The investment requirement of ternary materials on R & D cost is slightly higher than that of precursors. Greenmei, Xiamen Tungsten and Hunan Cunninghamia lanceolata have the highest R & D investment, and these enterprises operate at least two kinds of cathode materials.

Homeopathic layout wins future opportunities: according to incomplete statistics, the future project of European lithium battery plant is expected to put into production of 250GWH in 2020tel 2025, and its long-term production capacity will further reach near 500Gwh. At present, the production capacity of ternary and precursors in Europe is only less than 100000 tons, which is far from enough to meet the needs of expanding the production of a large number of batteries. will they go to Europe for investment or export in the future?

EV Charging Industry Report - Biweekly 002
This report provides an in-depth analysis of the supply and demand, policy guidance and key enterprises of the charger industry, as well as analysis of industry issues and opportunities.

China EV Insight 001
This newsletter describes the latest trend of EV industry:Government Continued to Optimize the Policy Environment, Copper Foil is in Short Supply, M&A in the Upstream and Downstream Start Booming ...