SMM7 March 13: copper prices rose sharply again last week, with Lun Copper rising as much as 6.9%. Copper in Shanghai rose more than 5% after the opening of trading today, mainly due to the continuous fermentation of tight supply on the supply side and the progress of the new crown vaccine, all of which provided the impetus for the rise in copper prices. 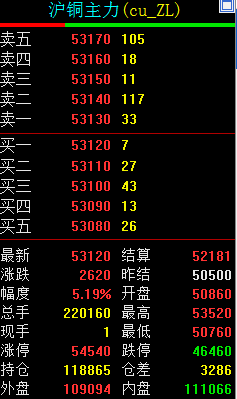 Last week, the central bank announced that the scale of social financing in China increased by 3.43 trillion yuan in June, and the M2 money supply increased by 11.1% in June compared with the same period last year, which was higher than expected, indicating that domestic monetary policy is still inclined to broad credit. The macro data such as PMI in June show that the signs of economic recovery are relatively obvious, the control of the epidemic is relatively good, and the fundamentals have indeed given the market strong confidence. The A-share market rose strongly last week, with the Shanghai Composite Index up nearly 460 points in just seven trading days, from opening at 2991.18 points on July 1 to closing at 3450.59 on July 9. Guan Tao, global chief economist at Bank of China Securities, believes that from the perspective of economic fundamentals, the market generally holds good expectations for the economic data in the second quarter; second, the recent deep reform in the capital markets has also continued to boost market confidence in the long run; moreover, funds are generally relatively loose, supporting the stock market rally to a certain extent; in addition, the recent rebound in overseas stock markets has also played an exemplary effect.

After the policies of various countries have been on the ground for a period of time, the stimulating effect on the economy is being reflected. At present, both China and overseas are showing a strong rebound momentum, making the market ignore the impact of the epidemic on demand in the short term, while the impact of the epidemic on supply has increased the bullish sentiment in the market. The performance of overseas macro data exceeded expectations. The US non-manufacturing PMI recorded 57.1 in June, also far ahead of expectations. Last week, when the number of weekly jobless claims continued to fall, retail sales in Europe picked up significantly in May.

The epidemic continues in South America, led by Chile. It is reported that 2843 workers in Chile's national copper industry (Codelco) have been infected with the new crown virus. As of July 5, the mines hardest hit by Codelco were El Teniente and Chuquicamata, with 1044 new crown cases and 636 new crown cases, respectively. As a result, the market's concern about the supply side has become more obvious because of the gradual rise in new crown infection rates in other mining areas. SMM copper concentrate index is still in the trend decline range, the spot port game continues to be tense, will become the long-term risk of copper supply port. According to SMM, the strike vote for workers at the Zaldivar copper mine in Chile has been passed, and the result of the strike vote at the Centinela copper mine will be announced today. In view of the serious situation of the epidemic, there is great uncertainty in the follow-up negotiations on the copper mine wage agreement. According to the SMM survey, the overall domestic copper operating rate was 77.72% in June, down 0.35% from the previous month, and the expected copper operating rate in July was 75.67%, which continued to drop 2.05% from the previous month. With the arrival of the off-season of traditional copper consumption, new orders are weaker than the previous month, and orders of copper plate, strip and foil enterprises are hardly increased due to weak exports. However, the operating rate of copper pipe enterprises rebounded against the trend, mainly due to the high level of orders in the air-conditioning industry. Plumbing and sanitary ware export business has been repaired, driving the copper pipe operating rate to continue to rise, while cable orders began to decrease in July. Due to the double advantages of the rush effect of the epidemic and the vigorous implementation of infrastructure projects by the state in the second quarter, the performance of the cable industry is far better than that of the same period last year. The operating rate of SMM cable enterprises alone is more than 10 percentage points higher than that of the same period last year, which is a strong boost to domestic copper consumption in the second quarter. Despite the weakening of consumption in the third quarter, the expectation of future consumption is still relatively optimistic.

Judging from the pace of recovery after the epidemic at both ends of supply and demand, short-term supply reduction is still not the main contradiction of fundamentals, especially after domestic demand has entered the off-season but overseas has taken over the baton of recovery, the overall demand performance is resilient and the fundamental support is strong.

Guangzhou Futures analyst Xu Yuan believes that on the demand side, judging from the sustained and fierce monetary and fiscal stimulus in various countries, the determination of the economy to support the bottom is clear, and there is a good chance that the global economy will continue to recover. The overall global copper inventory has fallen to a low level in recent years and is still in the trend of elimination. On the supply side, the spread of the epidemic in South America continues to cause concerns about copper supply. According to SMM, Antofagasta has reached an agreement with Tongling Nonferrous and Jiangxi Copper on the supply of copper concentrate in 2021, which will provide copper concentrate supply to refineries in the first half of next year. The final negotiation between the two sides determined that the TC is 60.80 US dollars / ton, which is 1.20 US dollars lower than this year's long single TC62 dollar. On the capital side, CFTC net long positions continued to increase to a relatively high level, the market bullish sentiment is strong. On the whole, under the pattern of strong supply and weak demand, copper prices are easy to rise and difficult to fall in the short and medium term, and the price center of gravity may rise further.

Qu Yajuan, a futures analyst at Changan, believes that copper prices have continued to rise recently, with Shanghai copper successfully breaking through the 50, 000 round mark, up nearly 40% from its low at the end of March. In addition to the early demand, inventory continues to move down, scrap copper supply is in short supply, Chile and Peru copper production has been disrupted by the epidemic, the global continued loose monetary policy also provides strong support. At present, the inflection point of domestic inventory is approaching, and there is a tendency to accumulate; the price of refined waste is higher, which is not conducive to refined copper consumption. With the end of the centralized delivery period of the national network in May and June, cable consumption is difficult to provide more marginal increment; the external demand of home appliances is still restrained, automobile consumption will be in the off-season, and the demand may be lacklustre. The current market focus is on copper supply disruptions and inflation expectations under the global release of huge amounts of liquidity, and in the short term, copper prices are expected to rise further under inertia. However, the current price is already on the high side, and those who do not hold positions should not pursue it too much, and more than one order in the early stage can be continued.