According to SMM research, in July, the blast furnace steel mill, which mainly produces building materials, produced 9.0654 million tons of thread, down 2% from June, while the reel produced 2.694 million tons, an increase of 0.67% from the previous month. In addition, before the global epidemic can not be effectively controlled, domestic steel prices are still high, and the export volume of building materials from steel mills only maintains the basic level, which is basically unchanged from last month.

Table 1: an overview of the trend of thread production in China's mainstream building materials steel mills from 2019 to now

Table 2: overhaul of building materials in steel mills from June to July (in ten thousand tons) From a sub-regional point of view, the output of South-Central and East China has dropped obviously this month, while that of North China and Northeast China has shown a slight upward trend. Specifically,

At present, the national market is still in a situation of "strong in the north and weak in the south". The northeast, northwest and even North China are less affected by seasonal interference, the terminal demand is good, the merchants' shipments are smooth, and the spot price is higher than the overall price level in the south. Take Beijing as an example, as of July 10, the base price of Beijing Hegang thread is 3700mur3720 yuan / ton, while the Hangzhou market Shagang thread is only 3660,670 yuan / ton. It is quite different from the situation in previous years (in 2019, the average price of Shagang thread in Hangzhou market is 153.7 yuan / ton higher than that in Beijing), the profitability of steel mills is good, the pressure on factories and depots is relatively small, and the willingness to produce is still high.

Since mid-late June, various regions in the south have been deeply affected by the "Meiyu" weather, the construction rhythm of the construction site has been seriously dragged down, merchant shipments are not smooth, and the performance of rebar with stronger seasonality is particularly weak. the enthusiasm of steel mills to produce threads has cooled slightly under the double pressure of profit and inventory, and some steel mills have chosen to turn molten iron to plate coils, profiles and strips. 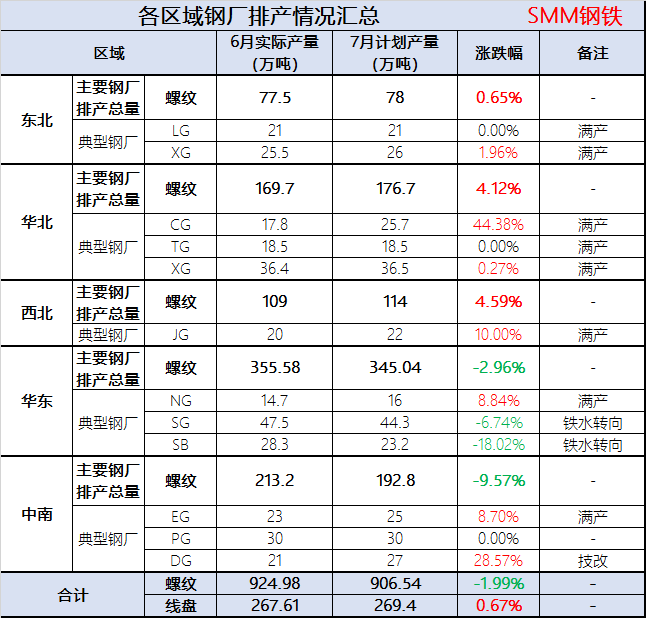 The output of steel mills peaked and fell as scheduled in July. At a time when China has not yet completely got rid of the seasonal interference, it is difficult for the "steel needs" of the rebar terminal to break out substantially, and it is difficult to have an obvious strong-weak relationship between the profits of steel mills producing threads and other varieties. In the later period, the supply side is likely to maintain a narrow fluctuation pattern. At the same time, the demand side gradually warmed up under the contraction of the range of rain. Under the marginal improvement of fundamentals, the upward channel of thread spot price has been quietly opened.