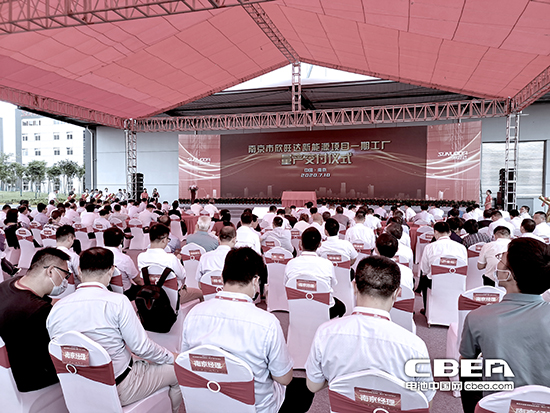 The picture shows the scene of the mass production ceremony.

Wang Mingwang said in his speech that "after the completion of the Nanjing Xinwangda power battery project, it will serve the new energy automobile enterprises in East China and drive the gathering of regional high-end R & D, technology and management talents." Wang Mingwang pointed out that the mass production and delivery of the first phase of the project is a good start for the Xinwanda power battery project.

Wang Mingwang said that at present, the company has built two HEV lines and one bev line, which integrates cutting-edge technology in the industry and has the capacity of 4GWh mass production. All production lines will achieve automatic production, with R & D, technology and management personnel accounting for more than 70%. After the completion of the overall project in Nanjing, enterprises including positive electrode, negative electrode, diaphragm and electrolyte, including power battery raw materials, will be brought together to form an industrial cluster with lithium battery as the core.

"the mass production of the first phase of Nanjing Xinwangda project has three very important meanings." Liang Rui, vice president of Xinwanda, said in an interview at the scene of the ceremony that first, in terms of overall strategic planning, Xinwanda has achieved its layout in East China. In a short period of more than a year, it has achieved mass production and is able to supply to customers, proving the extraordinary strength of Xin Wanda.

Second, in fact, the original purpose of the Nanjing project is to supply high-end customers (including Nissan and Renault). At present, Xinwanda insists on the high-end customer positioning strategy, which has taken a solid first step, which is of great significance. Third, Xinwanda's HEV battery first achieved large-scale mass production in Nanjing, which is different from many other domestic power battery manufacturers, highlighting Xinwanda's unique advantages.

In the market, Xinwangda BEV power cell products shipped a total of 21736 sets in 2019, a total of about 1.11GWhh, of which 13092 sets of independent batteries were shipped, a total of about 0.7GWh. The introduction of Xinwanda products into front-line high-end customers at home and abroad is progressing smoothly. With the continuous introduction of customer orders and the gradual release of production capacity, the power battery business will gradually reach production and produce benefits.

Xin Wanda's technical strength is constantly recognized by international mainstream car companies. In June 2020, Nissan announced that it would work with Xin Wanda to develop the next generation of car batteries for the e-POWER system. The two sides will jointly develop the next generation of on-board batteries suitable for e-POWER smart charging technology models. In addition, Nissan will discuss with Xin Wanda the development of an efficient production system to ensure a stable supply of jointly developed batteries.

It is worth noting that not only technical cooperation, Xinwanda also continues to receive huge orders from domestic and foreign heavyweight car companies. In April 2019, Xinwanda announced that its wholly-owned subsidiary Xinwanda Electric vehicle Battery Co., Ltd. had received a supplier designated notice from Renault Nissan, and the demand for related models is expected to reach 1.157 million in the next seven years. The product will adopt the power cell solution and power battery system solution independently developed by Xinwanda, and the order amount is conservatively estimated to exceed 10 billion yuan.

In May 2019, Xinwanda announced that Xinwanda Electric vehicle Battery Co., Ltd. has been designated as the supplier of power batteries to be developed for Project X of easyJet (a joint venture between Renault, Nissan and Dongfeng). In the next 2020-2025, Xinwanda Electric vehicle Battery Co., Ltd. will provide battery packages for about 366000 related models.

Liang Rui said that the Renault-Nissan-Mitsubishi alliance is currently the largest automotive alliance in the world, and will regard electric vehicles as the main business development direction in the future, and it is of great significance for Xinwanda to become a partner of the alliance. "We always believe that the development of the power battery industry must be combined with high-end customers in order to be stable and far-reaching." Liang Rui said.

Liang Rui believes that in recent years, more and more international front-line car companies have sought strategic cooperation with Chinese battery manufacturers, which shows that China carried out the plan of "ten cities and thousands of vehicles" ten years ago, as well as the introduction of new energy vehicle incentive policies. as a result, China's power battery industry has made great progress, and now the first-mover advantages of China's power battery industry have been reflected, and at the same time, it also has the capital to realize.

"the specification-level power batteries are very demanding in terms of technical requirements." Liang Rui pointed out that if battery companies want to get the favor of more high-end car companies, the key is to focus on the upgrading of technology, to see if they can always be in the forefront of the industry, and whether the product quality can meet the requirements of high-end customers. "as long as we are committed to maintaining the industry leading edge in product technology, quality, cost and so on, our value can be reflected, which is a natural thing. Xinwanda is very confident in her own value! " Liang Rui concluded.

It is reported that, in addition to the planned 30GWh capacity of Nanjing base, the current core production line of Pack and 2GWh capacity of 6GWh capacity of Xinwang base in Huizhou has been put into production, and the remaining 2GWh will be put into production this year. In the future development, Xinwanda new energy power battery business will establish more in-depth cooperation with many well-known automobile manufacturers at home and abroad, promote the upgrading of the automobile industry, and make new energy better serve customers and the world.