CST
Source:SMM
Operating rates of blast furnaces at Chinese steelmakers continued to decline over the second week of July, falling 0.06 percentage point from a week ago to an average 90.1% as of July 8, showed an SMM survey. That marked the fourth consecutive week of decline.

SHANGHAI, Jul 9 (SMM) – Operating rates of blast furnaces at Chinese steelmakers continued to decline over the second week of July, falling 0.06 percentage point from a week ago to an average 90.1% as of July 8, showed an SMM survey. That marked the fourth consecutive week of decline.

However, the operating rates are estimated to pick up next week due to positive prospects for near-term demand. 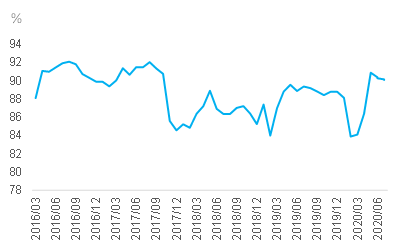 In the ferrous market, the most-active September iron ore contract on the Dalian Commodity Exchange (DCE) rose 2.74% on Wednesday, leading gains among ferrous metals, as a continuous rise in the stock market gave a boost to investors sentiment. Concerns about the coronavirus impact intensified after Brazilian President Jair Bolsonaro said he has tested positive for the COVID-19. This darkened the supply prospects, which also lifted iron ore prices.

On the demand front, transactions came stronger than expected as a surge in futures prices prompted traders to step up restocking, while the market was concerned that downpours and traffic controls during the period of national college entrance exam on July 7-9 to slow the release of demand. The national average transaction volumes of long steel, including rebar and wire rods, were above 250,000 mt in the recent days.

SMM anticipates a resurgence in demand in the near future as the rainy season ends. This, coupled with sufficient liquidity and macro optimism, will likely sustain this round of rally in steel prices.

Here are the details of the SMM survey:

A representative steelmaker in east China said it has diverted part of the molten iron, for the production of long steel, to steel strip, which enjoys higher profits.

A steel mill in south China is currently in normal operation without plans for maintenance in the near term.

Long steel production at a major steel mill in central China has declined, as the producer shifted some capacity to cold and hot-rolled coils. It currently faces elevated in-plant inventories.

A steelmaker in the south-west has ramped up its production to a record high level amid full operation. Its inventories also piled up, which may drive the mill into maintenance in the near term.

A steel plant in north China has not concluded the overhaul at its 4000m3 blast furnace. It has put its rolling lines into staggered maintenance.

Operating Rates of Blast Furnaces across Chinese Steelmakers Stood Flat on Week
Operating rates of blast furnaces at steel mills stood flat on the week and decreased 1 percentage point from a month ago to 81.2% as of July 29, SMM survey showed.

China steel rebar inventory down 4.5% on week
Inventories of rebar across Chinese steelmakers and social warehouses stood at 10.61 million mt as of May 20, down 4.5% from a week ago. Stocks are down 2.2% from a year earlier.