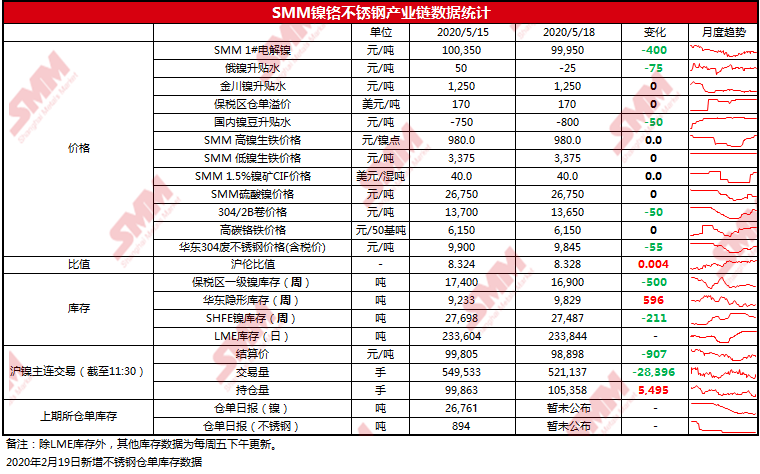 Nickel price judgment: the spot demand of nickel is flat while the supply is expected to increase in the later period, which is not obviously positive; although the other industry chain nickel pig iron remains strong, stainless steel has the trend of weakening slightly after seeing the top, which is also negative. Although there is a lack of favorable stimulation in nickel prices recently, this round of pullback to a relatively low level below the 100,000 mark, and as overseas gradually emerge from the shadow of the epidemic, there may be no further pressure on the macro side, and the market mentality may rise again in the context of the superimposed two sessions. It is expected that while nickel prices continue to fluctuate this week, the lower space is relatively limited, so short-term bargain selling can be considered. This week's range of Shanghai Nickel 98000Lue 103000 yuan / ton, Lunni 11700USD12300 / ton.

1. May 18th SMM1 Electrolytic Nickel quotation 99200mur100700 yuan / ton, the average price is 400 yuan / ton lower than Friday. Shanghai Nickel fell sharply in Friday night trading and stabilized above the 60-day moving average on Monday. During the day, Shanghai Nickel fluctuated around 99300 yuan / ton in the middle rail of the Bollinger line, and gradually rose in the late afternoon. In the spot market, most traders have turned to quoted prices for Shanghai Nickel 2007 contracts, and they are more willing to raise prices after the turn of the month. Russo Nickel to Shanghai Nickel 2007 contracts are mostly quoted in the paste 50 to Pingshui, there are a small number of non-deliverable new Russo Nickel newspaper stickers 100 yuan / ton, the transaction situation is mixed, as the nickel price fell below 100, 000, and pure nickel relative to nickel pig iron discount, it is reported that steel mills actively inquire, individual trade has a large deal; but some traders said that due to the narrowing of Russian nickel discount, weak downstream demand, light turnover. Jinchuan Nickel to Shanghai Nickel 2007 contract rose 1200mur1300 yuan / ton, transaction activity is less than Russo Nickel. Shanghai and Jinchang have only a small number of shipments. At present, the inventory of various traders is relatively small, and there is still a demand for replenishment, which is expected to be strong in the future. In terms of nickel beans, the contract of Shanghai Nickel 2007 is about 800yuan / ton. it is reported that recently, imported nickel beans have been declared to enter the country. In addition, the import window opened briefly on Monday morning, but foreign traders prefer forward bill of lading goods. It is reported that there is a small amount of Russian nickel locked in the market, and it is expected that the import of pure nickel will gradually increase after late May and June.

2. On May 18, the price of high nickel pig iron is 970mur990 yuan / nickel point (including factory tax), which is the same as that of the previous trading day. Although the price of nickel has been adjusted back, the mentality of iron mills is stronger, and the shortage of nickel mines is difficult to be substantially alleviated for the time being. after the lifting of the ban in the Philippines, most of the negotiable goods in the market are purchased by large factories, while it is more difficult for small iron mills to purchase raw materials. Worries about production by merchants have increased, and the mentality of being reluctant to sell is still strong. It is expected that the market price will remain around 1000 yuan / nickel point (including factory tax) in the short term.

3, May 18, Wuxi stainless steel market quotation is generally flat, 304x2B rough edge crimping price range of 13500mur13800 yuan / ton, the average price slightly reduced by 50 yuan / ton; 304gamble 2B factory trimming coiling price of 13800Must14000 yuan / ton, 304Universe NO.1 13100Muth13300 yuan / ton, are the same as last Friday. On Monday, Aoyama stainless steel announced a new offer price for 304cold and hot rolling, with 304mm hot rolled board at 13100 yuan / ton and 304ft cold rolling at 13400 yuan / ton, both up 300 yuan / ton from the previous price. But recently, stainless steel spot transactions have a weakening trend, May orders gradually reached the market, cold rolling quotation slightly reduced. Operators said that most of the orders are expected to arrive this week, and even if the futures price increases after the concentrated arrival of goods, the impact on the spot market is estimated to be limited, mainly depending on downstream transactions and receipt of goods.