SMM monthly output data of basic metals in China is scheduled to be released around the 8th of each month. It aims to proceed from the essence, excavate the real fundamental situation, open up the illusion of the capital market for people in the industrial chain and investors, and grasp the future trend of the non-ferrous market more clearly.

Summary of basic Metal production in China in April 2020

In April, the domestic sulfuric acid consumption improved obviously, and the acid prices everywhere recovered. Most of the areas except North China are no longer sold at discounted prices, which has alleviated the production pressure on domestic refineries, but the price is still far from the cost of acid production. On the other hand, due to the major overseas mining countries, especially Peru, which were greatly disturbed by the epidemic in April, copper concentrate shipments declined, and refineries are generally concerned about the supply of subsequent raw materials, and there has also been an increase in maintenance plans in the second quarter, which may have an impact on electrolytic copper production in June and July.

According to SMM data, in April (30 days), China produced 5.645 million tons of alumina, of which metallurgical grade alumina was 5.395 million tons, and the average daily output of metallurgical grade was 179800 tons, an increase of 2.61% from the previous month, down 7.07% from January to April. China's cumulative metallurgical grade alumina production decreased by 8.61% from January to April. Alumina prices hit bottom in April, and the area of production reduction affected by the epidemic in Shanxi and Henan has narrowed. At the same time, the production of some imported ore production lines invested by Guodian in Shanxi, Luoyang Wanji and Chongqing Bosai has been reduced within the month. Under the background of increasing and decreasing production, the average daily output of alumina in April was slightly higher than the previous month.

As of early May, the operating capacity of metallurgical grade alumina was 65.08 million tons. In May (31 days), the output of metallurgical grade alumina is expected to be 5.527 million tons, and the average daily output has dropped slightly to about 178000 tons. This is mainly due to the further reduction of production in the import line of some northern alumina plants (Chinalco, Shanxi, etc.). The reduction of production is possible. It is necessary to pay continuous attention to the changes of imported ore production lines in Shanxi and Henan areas and the willingness to reduce production capacity and resume production capacity under the condition of mild price increases.

According to the survey, primary lead production continued to increase in April, basically in line with expectations. Apart from the fact that the output of smelting enterprises resumed in March continued to climb in April, at the same time, Henan Yuguang, Hunan Jingui, western mining and other enterprises resumed after overhaul, although a small number of enterprises began routine maintenance in the middle and late April, but it has little impact on the overall output.

In addition, with the escalation of the overseas epidemic situation in the middle and late March, the import of lead concentrate was restricted to a certain extent, which led to the reduction of domestic mineral circulation supply and the continuous decline of lead concentrate processing fees, but it is worth noting that primary lead smelting enterprises generally have a certain mine stock. up to now, smelting enterprises have not yet reduced production because of tight ore supply.

Looking forward to May, for example, mines in high altitude areas such as Inner Mongolia will resume production seasonally, or ease the tightening of lead concentrate to a certain extent, the decline in processing fees for lead concentrate will slow down, and the production of most primary lead enterprises will be basically normal. and some enterprises with equipment failure problems lifted, its output increased slightly in May. In May, there are also some domestic primary lead enterprises into the state of maintenance, such as Anhui Copper Guan, Chifeng Mountain Gold, Yunnan Mengzi and so on. Overall, there is little change in primary lead production in May, and SMM expects primary lead production to drop to 254000 tons month-on-month in May.

According to the SMM survey, the domestic refined zinc production in April is basically in line with the expectation of month-to-month increment. In April, the increment of domestic refined zinc was mainly concentrated in the overhaul from February to March and the resumption of production of refineries that stopped production last year, and the areas were mainly concentrated in Inner Mongolia and Gansu. In addition, due to the epidemic situation still had an impact on domestic inter-provincial logistics and transportation in March, the raw material supply of refineries in Yunnan, Shaanxi and other regions was affected to a certain extent, while in April, domestic logistics resumed and refinery production returned to normal, further driving the output up. On the other hand, the reduction is mainly affected by the maintenance of domestic refining zinc refineries, which are concentrated in Qinghai, Guangdong and Yunnan, and the output of refined zinc in China increased by 13000 tons in April compared with the previous month.

In May, affected by many factors, such as delayed delivery of overseas mines due to epidemic force majeure and low stock of raw materials in domestic refineries, the processing fee for domestic zinc concentrate has fallen to 5000 yuan / metal ton, the import processing fee has fallen to US $150 / dry ton, the profit of smelter enterprises has narrowed, and some refineries have chosen to advance the maintenance plan, in addition to the original planned maintenance (Yunnan, Gansu, Inner Mongolia, Guangxi, etc.). In May, the output of refined zinc in China fell by about 4500 tons compared with the previous month.

In April 2020, the national output of electrolytic nickel was 14400 tons, down 7.63 percent from the previous month, an increase of 14.55 percent over the same period last year. The decrease in production in April was mainly due to the scheduling and production of some domestic smelters in accordance with the financial monthly cycle. Although the scheduling and completion of the manufacturers did not change much in March and April, after being converted into natural monthly production, the amount taken into account in April was lower than that of the previous month. At present, the production conditions of most domestic smelters are good: Gansu smelters have recently completed the production schedule steadily with a monthly output of 13000 tons; the monthly output of Xinjiang smelter has increased slightly compared with the first quarter and is expected to be maintained next month; the same output of electrolytic nickel in Jilin and Shandong smelters is stable, while the output of Tianjin smelter does not change much this month, but in the later stage, it may gradually reduce due to raw material costs and profits. Guangxi smelter still suspended electrolytic nickel production line.

1. The value with * is the corrected value, and the value in italics is the predicted value.

3. The output of nickel pig iron refers to the data after the physical quantity is converted into metal.

In the process of research, ensure the basic coverage proportion of the sample, and continue to expand; at the same time, consider the size of production capacity, geographical distribution, enterprise nature and other details of the reasonable selection and distribution of samples, so that each sub-item data is representative.

Before the 10th of each month through the Shanghai Nonferrous Network official website (www.smm.cn), WeChat subscription account (Today Nonferrous), mobile phone station (m.smm.cn) and other official channels to the public. 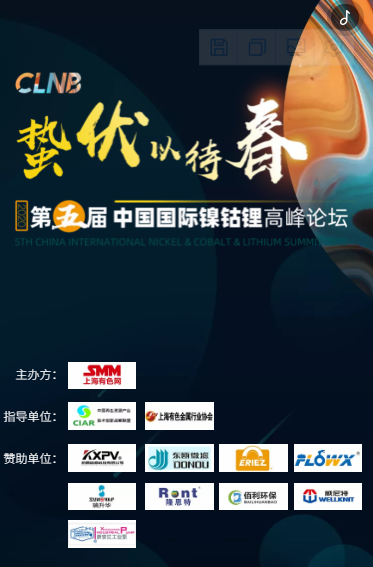 Scan to sign up for SMM Summit or apply for SMM Metal Industry Exchange Group:

Kazakhstan KAZ Minerals Copper Output Rockets in H1 2017
KAZ Minerals’ copper output jumped 110% on a yearly basis to 118,000 tonnes in the first half of 2017 due mainly to commencement at Bozshakol and Aktogay projects.

Decline in Chile Copper production hits Global Copper mine output
Global copper mine production is estimated to  have declined by around 3.5% in the first four months of 2017, with  copper concentrate production declining by around 3% and solvent extraction-electrow