SMM News: recently, Vale released the first quarter of 2020 production and sales report. The details are as follows:

In the first quarter of 2020, Vale's business output was limited by the new crown epidemic.

The direct impact of the epidemic on the company's operations in the current quarter has been disclosed at different times and is summarized as follows: (1) in the iron ore business, Vale suspended the operation of the Malaysian logistics center, which had no impact on production; (II) in terms of basic metals business, Vale reduced its mining operations at the (Voisey's Bay) mining area in Voith Bay, Canada, and carried out maintenance for a period of four weeks, followed by an extension of the maintenance period to no more than three months, which will have an impact on copper concentrate production of up to 6000 tons in the first half of 2020; (3) on the coal business, Vale decided to postpone the maintenance (renovation) plan for the Mozambican coal concentrator.

Looking ahead, the impact of the new crown epidemic on Vale's operations is likely to increase.

This is mainly due to: (1) in the event of an escalation of the epidemic in neighbouring communities, the company needs to strengthen security measures to protect its employees, when the absenteeism rate of the production system is likely to increase; (2) due to safety restrictions, the basic metals plant has postponed planned shutdown maintenance; and (3) the government is likely to deepen restrictions in order to combat the epidemic, which may eventually prevent the company from ensuring that the minimum number of workers required for production is met. In the first quarter of 2020, Vale iron ore output was 59.6 million tons, down from 63 million tons to 68 million tons in the current quarter. The main reasons include: (1) the northern system lost 4.5 million tons of production due to the following unplanned maintenance of; (b) concentrated and more intense weather-related factors for long-distance conveyor belts in the: (a) S11D mining area, especially the operational restrictions on the Beiling mining area related to the weather factors; (c) encountered in March and the delayed start-up of the new Morro 1 mining area. (II) third-party procurement decreased by 1.8 million tons as a result of reduced supplies as a result of torrential rains in southeastern Brazil. 3) some of the operational problems of the southeastern system resulted in a loss of production of 2.1 million tons, mainly in the (Itabira) integrated mining area in Itabila. 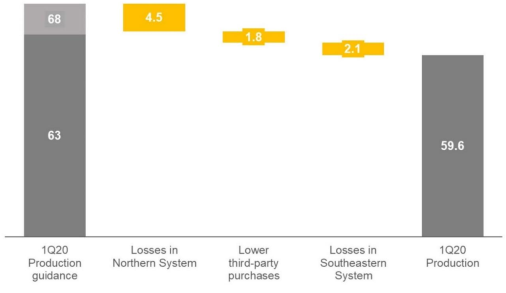 Sales of iron ore powder and pellets reached 59 million tons in the first quarter of 2020, the same as production. Among them, the proportion of excellent products reached 87%. The quality premium for iron ore powders and pellets was $5.2 / tonne, down $1.20 / tonne from the previous quarter, mainly due to the fact that dividends were not received from leased pellet plants in the current quarter, 3 and a reduction in pellet premiums, partly offset by an increase in iron ore powder premiums. Vale revised its iron ore powder production from 340 million to 355 million tons to 310 million to 330 million tons and pellets from 44 million to 35 million to 40 million tons. The main reasons include: (1) the loss of production in the first quarter of 2020; (2) the delay in the resumption of production in some mining areas due to the postponement of the inspection, assessment and approval process due to the new crown epidemic, such as the Timbopeba mining area and the Fabrica mining area; (3) the delayed implementation of tailings disposal alternatives in the Brukutu (Brucutu) mining area should not be completed by the end of the second quarter of 2020; (4) other effects related to the new crown epidemic, which increase the risk of absenteeism, and then affect the operating results of various sensitive schemes.

Vale's sales in 2020 may vary depending on market conditions and the company's strategy to give priority to benefits over production, priority to mixed products in the product portfolio and, where appropriate, restocking.

Production of finished nickel reached 53200 tons in the first quarter of 2020, down 2.9% from a year earlier, but still strong for the same period in history, given its excellent performance in the first quarter of 2019. The month-on-month decrease of 6.2% was mainly due to the scheduled maintenance carried out by the Indonesian plant and the Matsuzaka nickel refinery in Japan during the quarter, as well as a decrease in the supply of raw materials from Canadian and Indonesian mines to Cladakh in the United Kingdom and Dalian Nickel Refinery in China.

The closure of the New Caledonian refinery is proceeding as planned, with the refining business responsible for processing feed into nickel oxide shrinking in March 2020 and will produce only nickel hydroxide cakes from May 2020.

Copper production reached 94500 tonnes in the first quarter of 2020, up 4.7 per cent and 0.7 per cent year-on-year, respectively, thanks to an increase in production at the Sosaigu (Sossego) plant after unplanned shutdown maintenance in the previous quarter.

Despite weather-related factors, coal production reached 2 million tonnes in the first quarter of 2020, up 4.6 per cent from the previous quarter, thanks to improved mining and factory performance in March. Monthly production reached 918000 tonnes (operating at an annual capacity of 11 million tonnes). Nevertheless, due to reduced demand for coal, the inventory capacity of mines and ports has reached its limit, so this production rate cannot be maintained in April. Due to the uncertainty caused by the new crown epidemic, including the announcement that it will postpone plans to renovate the Mozambican coal concentrator (the restart date has not yet been set), Vale will withdraw its previously issued 2020 coal guidance production and is currently unable to provide new guidance production for the time being.

Vale is continuously assessing the impact of the new crown outbreak on the company's business and will disclose it in a timely manner if it has any further material impact on the company's operations, supply chain or customer needs. Vale will remain committed to restoring and stabilizing production under the highest safety conditions while taking action to ensure business continuity and active social cooperation during the epidemic.

CST
industry news
Brazil iron ore export surges as Vale boost production
The exports from Brazil increased by 18 percent in the last month, an reached to 37.4 million metric tonnes, when compared with the production of 31.8 million tonnes of iron ore in the previous year.