SMM4 17: today's last period of crude oil futures opened low, the main 06 contract fell more than 8%, fell to a one-month low of 242.1 yuan / barrel. However, linoleum oil has generally risen because US President Donald Trump has proposed guidelines in which state governors can gradually lift anti-epidemic closures and restart the economy in three stages. Other countries have also loosened restrictions and oil demand is expected to increase. As of today's close, crude oil fell 4.91% to 253.7 yuan / barrel. 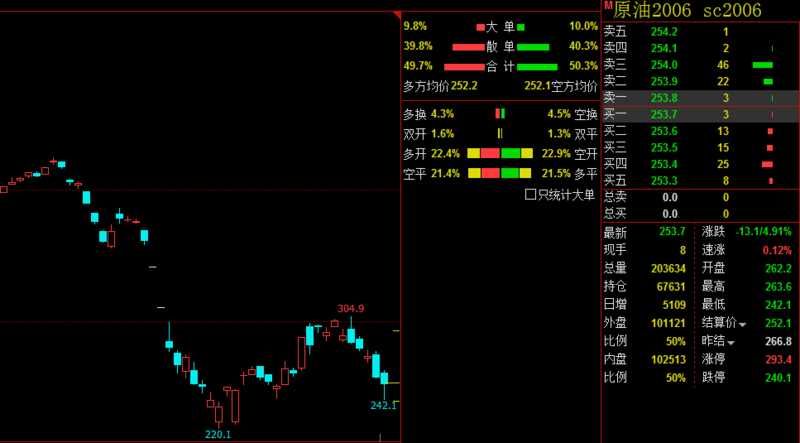 Domestic GDP fell sharply, superimposed supply skyrocketing to suppress the operation of oil prices. According to the Bureau of Statistics, the gross domestic product (GDP) in the first quarter was 20.6504 trillion yuan, down 6.8 percent year on year at comparable prices. Among them, the secondary industry fell the most. In addition, it was reported today that Saudi Aramco will supply full supply of crude oil to Asian refiners in May. Saudi Arabia, the world's largest oil exporter, has informed some Asian refiners that it will supply full amounts of crude oil in May as contracted, industry insiders said. Saudi Aramco will supply at least three Asian buyers with the full amount of crude oil loaded in May. Sources said that although Saudi Aramco has not changed the amount of crude oil supply, Saudi Aramco has changed its crude oil mix, increasing the proportion of Arab light crude oil and reducing the proportion of Arab heavy crude oil. In this way, more gasoline and diesel can be produced by refining.

Moreover, in order to follow the Saudi price adjustment, Iran has set the official price of Iranian light crude for the Asian market, (OSP), at $7.20 a barrel compared with Oman / Dubai crude, down $4.10 from the previous month. The official price of Iran's heavy crude oil for May to the Asian market, (OSP), also fell by $3.35.

Early LPG futures options on the market to boost the previous period of crude oil, or now make up for the decline. Liquefied petroleum gas (LPG) LPG option 31 was officially unveiled, and energy and chemical products were stimulated on the same day. The main force of liquid fossil oil and gas futures rose by the limit, up nearly 7%. Crude oil rose more than 6%, followed by a few days of last-term crude oil futures continued to rise, the recent decline or make-up decline. And recent reports by international crude oil agencies have cut demand for future crude oil: the IEA report expects oil demand to fall by 29 million barrels a day in April from a year earlier to its level since 1995. Oil demand fell 23.1 million barrels a day in the second quarter from a year earlier, and is expected to fall by 2.7 million barrels a day in December. OPEC's latest monthly crude Oil Market report now forecasts that crude oil demand will fall to its lowest level in 30 years. World crude oil demand growth forecast for 2020 has been cut by 6.9 million barrels per day. Although the OPEC+ has reached an agreement, there is still no incentive for a sharp rise in oil prices in the short term.

Tangshan has activated level II anti-smog measures
The orange anti-smog alert started on 10:00 CST February 5 and will remain in place until further notice

HRC arrivals at spot markets decline for 1st time since end-Jun
About 194,000 mt of HRC arrived at Shanghai, Lecong and Tianjin, this week, down 52,000 mt from last week

Tangshan to deepen production curbs till end-Jul
Sintering and pelletising machines, blast furnaces, converters, and lime kilns are required to cut capacity by 20% or 50%