According to SMM, the cumulative import of copper concentrate fell back from January to March compared with the same period last year, mainly due to the impact of the epidemic in China from January to February, and the feed volume of copper concentrate declined, so it sought to postpone the adjustment of the shipping date, so the import volume decreased slightly under the expansion of domestic production capacity compared with last year, but taking into account the obvious reduction in domestic feed volume and electric copper production in the first quarter, the import reserve warehouse of copper concentrate basically met the needs of refinery production in the first quarter.

However, as we enter the second quarter, expectations of tight supply are growing. On Monday, the Peruvian Antamina copper mine, co-owned by Glencore, BHP Billiton and Tek Resources, announced a suspension of operations for at least two weeks. In addition, Minmetals Resources Co., Ltd. issued a notice to revoke the 2020 Peruvian Las Bambas copper production guidelines. Peru ruled that ships ordered after 15 March could not dock and extended the domestic state of emergency until 26 April, with shipments expected to be affected almost throughout April, with domestic copper concentrate imports falling significantly in May-June. 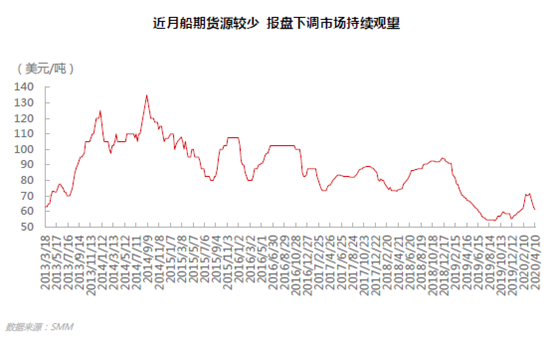 As of Friday, the SMM copper concentrate index (weekly) was at $61.20 / tonne, down $1.30 / tonne from the previous week. Due to the supply of goods in the market is less, the seller cherish the sale mood aggravated, last week the market offer has been lowered, TC has appeared 5 head offer.