SMM4, April 15: April 15, stainless steel futures price has been successful seven Lianyang, break through the 13000 gate, recover all the lost ground since February 24, nickel side is the same momentum, Shanghai nickel main contract 2006 in the end of March after the shock in early April began to rise, as of about 13:45 on April 15, Shanghai nickel at 98580 yuan / ton, up nearly 1.9%, to recover all the decline since March 18. 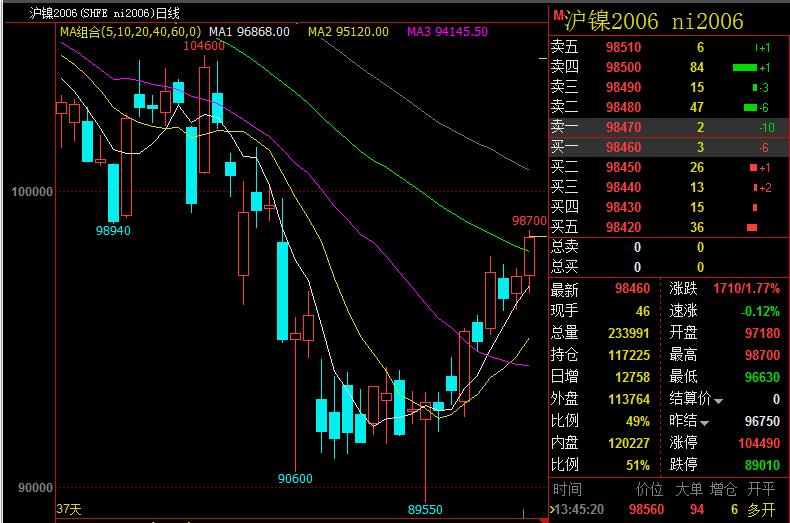 Affected by the epidemic, local nickel miners in the Philippines are still in a state of suspension of mining. On April 7, Philippine President Rodrigo Duterte said he preferred to extend the blockade until April 30 to further stop the coronavirus outbreak. On 8 April, Nickel Asia of the Philippines indicated that, in response to the call of the local government, it had decided to suspend nickel ore mining and export operations in (Surigao del Norte), North Suriname Province, in the south. Global Ferronickel Holdings Inc, the second-largest nickel producer and exporter in the Philippines, also said it had decided to suspend mining operations to ease concerns about the spread of Xinguan pneumonia.

According to SMM research, at present, Suri Gao area due to the first case found, mining and mining plus full line shutdown, Kovo area PGMC and TMC two single largest mines are still unable to ship, the bottom island only CMC one ship is loaded, no new ships to enter, at the same time, all incoming ships must be isolated for 14 days. Suriname is expected to have few supplies in April, as the main mining area after the rainy season, the impact is greater. Exports in April are expected to be the same as in March, with only more than 20 shipments, and there are currently no high-quality mines available.

At present, the price of stainless steel futures contracts has risen continuously, or the market has slightly revised the decline in the previous period. On the one hand, it is expected that the supply and demand side will be improved to a certain extent in the later stage; on the other hand, nickel ore is prohibited from transportation, and the price of nickel and iron and stainless steel scrap has gone up, pulling up the cost and strengthening the price of stainless steel. The spot market for stainless steel is also following the price increase under the influence of the sealing of various steel mills. But now the supply is still in a loose state, the foreign epidemic situation is in the outbreak period, stainless steel coil and metal products and other foreign export demand is limited, part of the export volume will be released in the domestic market, so the stainless steel walking strong situation or difficult to continue for a long time, the later stage may be in the new price shock range.

In terms of fundamentals, the reduction in production of nickel mines in the Philippines is more clear about the reduction in supply, and the price of nickel pig iron has become stronger. However, SMM believes that the price of nickel pig iron and ferrochromium is strong, will aggravate the cost pressure of stainless steel plant in April, stainless steel due to inventory pressure price is difficult to improve, the cost end price rise will aggravate the loss, April and later period still do not rule out the possibility of stainless steel production contusion demand, so the technical rebound repair of nickel price, mainly depends on the macro repair and the high decline of the global epidemic. SMM predicts that after breaking through the 20 antenna, Shanghai Nickel may have some upward space to take advantage of the macro recovery, 93000-100000 yuan / ton, and the top of the Lunni K column is facing the middle rail pressure of the Boll line, 11300-12000 US dollars / ton.