As of today, inventories in the bonded area have fallen for two weeks in a row, and inventories in the Shanghai bonded area continued to fall 5200 tons from last Friday to 333800 tons on Friday. There are two main reasons for the continuous decline of inventory in the bonded area: first, due to the continuous disturbance of the global epidemic, the shipment of electrolytic copper has also been affected, resulting in the scarcity of electrolytic copper to Hong Kong and the reduction of bills of lading. Second, due to the recent increase in the market expectations of national tax reduction and fee reduction in 2020, resulting in hoarding in the market, import prices have improved, resulting in an increase in market customs declaration imports. At the same time, according to data released by SHFE, since March 13, the last period of domestic inventory has begun to go to the warehouse state, as of April 3 has dropped to 332400 tons. 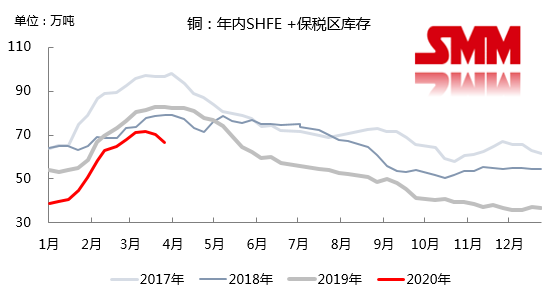 What is the current state of operation of the copper market as reflected by the continuous decline of bonded warehouses and previous inventories?

This week, the market for tax cuts expected to increase the superposition of consumption to improve the market to boost spot demand for electrolytic copper. Recently, the Politburo held a meeting to promote enterprises to better resume work and production, will adopt further loose monetary policy and active fiscal policy, the market is expected to increase in terms of tax cuts, the trading atmosphere in the spot market for electrolytic copper is active, and the willingness of holders to raise prices is also strong, resulting in a sharp increase in this week's rising water compared with last week. In terms of futures, the difference between the current month's contract of about 2004 and the recent month of about 2004 also changed from the Contango structure to the Back structure, and the spread was basically maintained at about 100 yuan / ton. At the same time, after entering the middle and late March, the overall performance of the downstream return to work improved, the recovery rate of copper enterprises was basically more than 80%, and the overall copper consumption improved obviously after the middle of March, resulting in the state of going to the warehouse for two weeks in a row.

However, it should be noted that the global epidemic, especially in the United States, is still in the stage of explosive growth, which has an impact on the import of copper raw material supply and the export of copper and terminal enterprises. Due to the fermentation of the foreign epidemic has disrupted the supply of foreign mines, spot copper concentrate TC continued to fall to 62.50 US dollars / ton this week, the market is mostly in a wait-and-see situation. The overall supply of scrap copper is still tight, domestic scrap copper due to the impact of the previous epidemic and the recent decline in copper prices affect the operating rate is very low, copper prices continue to decline and even fine scrap price difference appears upside down situation, resulting in domestic scrap copper suppliers cover goods and cherish the sale of strong sentiment; As for the import of scrap copper, as China's largest copper scrap importer is mainly Malaysia, while Malaysia's dismantling raw materials mainly come from Europe and the United States, the epidemic situation in Europe and the United States has affected the start of construction, thus affecting the domestic import of waste copper.

However, even if the supply of mining end and scrap copper end is tight, it is still difficult to significantly boost copper prices, because compared with supply, global demand is more seriously affected by the epidemic. The United States, as the most important economy in the world, and with the tertiary industry as the main pillar of the economy, the epidemic will significantly reduce its consumption level, and the linkage will have a greater impact on the overall global demand. At present, although the domestic spot market of electrolytic copper is temporarily active because of better fiscal policy expectations, it may only be the front of consumption, whether consumption can continue to grow, and the core point is still when the overseas epidemic can be completely controlled. If the overseas epidemic front continues to lengthen, it will have a double impact on China's exports and domestic demand, even if the tension of raw materials is difficult to pull the situation of weak demand.