According to the (SMM) survey of Shanghai Colored Network, the operating rate of domestic licensed recycled lead smelting enterprises was 49.44% in September, up 5.85% from the previous month. 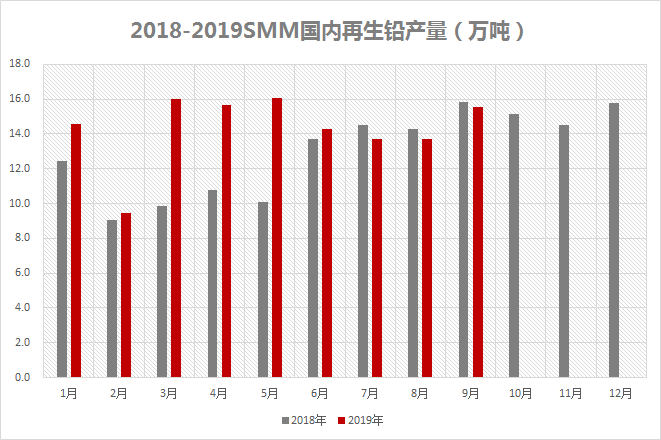 The survey involved 28 enterprises, involving a total production capacity of 3.774 million tons; in September, the total production of licensed recycled lead totaled 155500 tons, an increase of 18400 tons over August.

The operating rate of large enterprises (with an annual capacity of more than 100000 tons) was 51.86% in September, up 8.00% from the previous month. Among them, Anhui Huaxin resumed production in early September, and the daily output of recycled lead was maintained at about 100 tons. The overhaul at the end of August in Zhongqing, Shandong Province, and the current production situation has returned to the level before overhaul. In addition, the output of recycled lead in Hubei and Jiangxi has been seasonally adjusted to varying degrees, so the overall output of large enterprises has increased. The operating rate of medium-sized enterprises (50, 000 tons / year < 100000 tons) was 42.49% in September, up 1.73% from the previous month. The main reason for the slight increase in output is that the disposal capacity of Jinli waste battery in Henan Province showed a seasonally adjusted slight increase, and the output of Sanhe in Guizhou rose to the normal level. Guizhou Huoqilin prepared to resume production at the end of August and released some of its output in September. At the same time, Tongliao Taiding coincided with the environmental inspection in September, which affected a certain output. Due to the limited production of the National Day military parade, the output of Gang'an in Hebei Province dropped slightly, superimposed on the expiration of the environmental assessment certificate of Jiujiang Huijin. Production stopped in mid-September, offset by increases and decreases, resulting in only a small increase in production. The operating rate of small enterprises (with an annual production capacity of less than 50,000 tons) remained at 67.14% in September, down 5.72% from the previous month. This is mainly due to the implementation of weather pollution control in Beijing, Tianjin, Hebei and surrounding areas on the eve of National Day, resulting in a slight decline in the monthly production of recycled lead in Xinxiang Huarui, Henan Province.