CST
translation
Source:SMM
As the main variety of non-ferrous metals, the price of copper is influenced by macro-economy and fundamentals because of its strong financial properties. In recent years, there have been frequent accidents at the mine end, which has a certain impact on the supply side, so how will the impact of the supply side affect the trend of copper prices?

As the main variety of non-ferrous metals, the price of copper is influenced by macro-economy and fundamentals because of its strong financial properties. Because the consumption terminal of copper mostly comes from manufacturing, real estate and other basic industries, is the raw material port of the basic industry. Therefore, the quality of the real economy directly affects the demand for copper raw materials, and the real economy is changed by the change of the global economic cycle. Therefore, the wheel cycle of the economic cycle mainly has an impact on the demand side of copper fundamentals. The linkage between copper demand and supply determines the trend of price, but compared with supply, demand is in the leading factor of pulling copper price. When the economy expands, the rapid increase of demand side will enlarge the gap between supply and demand, which will lead to the rise of copper price. And the supply side is limited by the resources of raw materials and other reasons, in the case of a certain demand, the impact on the copper price is relatively small. In recent years, there have been frequent accidents at the mine end, which has a certain impact on the supply side, so how will the impact of the supply side affect the trend of copper prices?

In recent years, the trend of global copper supply tightening has gradually intensified. Since the strike of Escondida in Chile, which is owned by BHP Billiton, the largest copper mine in the world in 2017, the strike tide of copper mine in the world has begun, and the accidents at the end of the mine have broken out frequently. Mining chaos intensified in 2018, major copper mines began a wave of strikes, in 2019 Codelco's Chuquicamata copper mine continued to continue the 2018 dispute, another large-scale strike, frequent conflicts at overseas mining ends have tightened the global supply of copper concentrate. As a barometer of the change of supply and demand of copper concentrate, the processing fee of copper concentrate is a barometer of the change of supply and demand of copper concentrate. According to SMM, the long single TC of copper concentrate and spot TC are in a downward trend in recent years. In the second half of 2019, the long single TC has dropped to US $80.8 / ton, and the spot copper concentrate TC has dropped to US $55 / ton as of July 26. the price of superimposed by-product sulfuric acid has weakened year by year. In the short term, although the profit of the smelter is meager, However, due to the high cost of shutdown, social responsibility, government pressure and many other problems, it will continue to produce, especially after the centralized maintenance of the smelter in April and May this year, the output will still be released one after another. However, in the long run, the tightening of the mine end will affect the output of the smelter. In the output of domestic electrolytic copper in the past three years, the cumulative output of electrolytic copper decreased in 2019 compared with the same period last year. In terms of imports, according to SMM, the net import of electrolytic copper in 2019 is also in a downward trend compared with 2018. 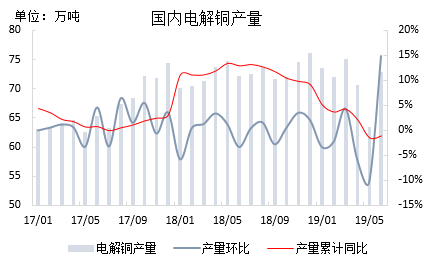 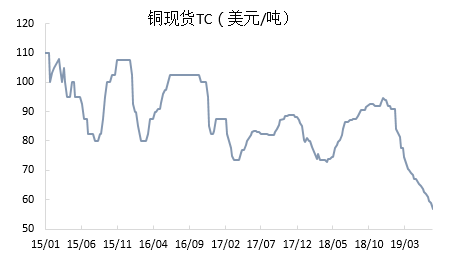 So why have copper prices struggled to hit highs this year, even if supply has been tight? Mainly because of the deterioration of Sino-US trade relations since the second half of 2018, it is undoubtedly even worse for China, which is already in the new economic normal, superimposed the current situation of the global economic downturn, and it is difficult for the real economy to recover in the short term. In the short term, even if the tightening on the supply side, the short-term pulling effect on copper prices is still limited, and because the production capacity of domestic smelters is concentrated in the third quarter, superimposed the weakness of downstream demand, it is difficult to raise copper prices in the short term; in the medium and long term, with the recovery of the global economy, the tension on the superimposed supply side will usher in a new wave of power for the high copper prices.