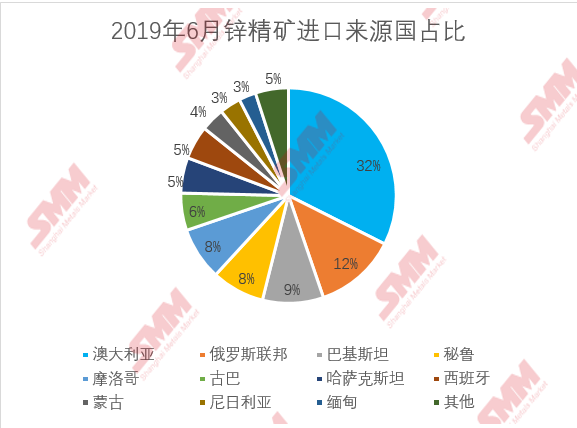 According to SMM, the reasons for the decline in imported zinc concentrate in June compared with the previous month are as follows:

In July, compared with the same period last year, although the domestic ore volume is in the period of increasing volume, but the downward trend of zinc prices, mine profits are gradually eroded, the short-term increment may still be limited. Superimposed foreign zinc concentrate import window has not yet opened, as far as processing fees are concerned, domestic mining and metallurgy negotiations may have a stalemate, if there is no reduction in the short term, the substitution trend of domestic zinc concentrate for imported zinc concentrate may continue, that is to say, the import of zinc concentrate may remain low and stable in July.

In addition, under the domestic squeeze market in June, the import loss narrowed by a larger extent, and some smelters may have locking behavior. It is expected that this part of the mineral volume may flow into China in the short term in the future, and the locking order volume may be relatively limited. However, it may be able to make up for the decrease in the amount of imported minerals brought about by some seasonal factors. Overall, SMM expects imports of zinc concentrate to be around 17-200000 physical tons in July.