CST
translation
Source:SMM
This week, after a brief pullback at the $2000 / tonne round mark, Lun lead reopened the upward space, as of 16-45, Lun lead temporarily closed the positive line in the entity, the rising momentum is still unfinished. So after the previous nine Lianyang, why can Lun lead start the rally again above US $2000 / ton?

This week, after a brief pullback at the $2000 / tonne round mark, Lun lead reopened the upward space, as of 16-45, Lun lead temporarily closed the positive line in the entity, the rising momentum is still unfinished. So after the previous nine Lianyang, why can Lun lead start the rally again above US $2000 / ton? 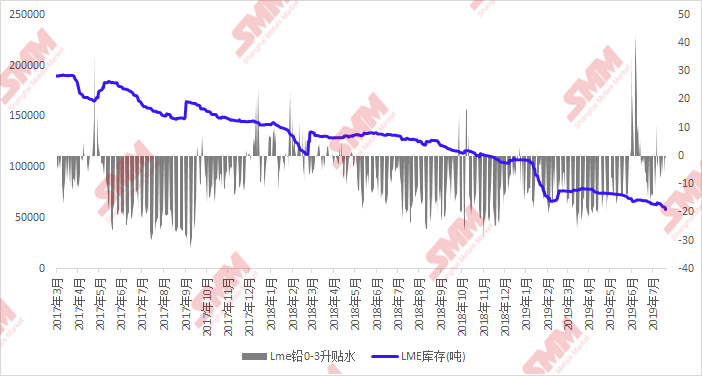 SMM analysis believes that repeatedly low LME lead inventory is the basis for funds to dare to do long external lead. As of today, LME lead stocks have dropped another 1175 tons to 57425 tons from a month earlier, constantly brushing the low level in the last 10 years, and speculative capital has continued to decline, resulting in a "soft warehouse" market. At the same time, it has been reported that the Korya lead smelter plans to start routine maintenance in August (the inspection period is about 2 months, affecting lead ingot production of about 10, 000 tons). And the news of unexpected production disruptions at Nystar's Port Pirie lead-zinc smelter in June and July, which affected lead ingot production of about 30, 000 tons, combined with low inventories, fuelled the bullish mood in the market.

From the perspective of arbitrage, looking back at the 2018 market, foreign LME lead inventory is relatively high, and smelter production is basically normal, foreign supply is relatively loose; From the LME lead structure can be seen, 2018 LME lead is basically congtango structure, and the domestic 2018 environmental protection inspection is strict, directly affect the refinery capacity release, and then affect the refined lead supply, 2018 lead ingot social inventory is basically maintained at the absolute low level of 10, 000 tons, the overall domestic supply shortage, so there are internal and external conditions. However, this year, foreign lead stocks continue to brush new low, coupled with smelter supply problems, foreign supply is relatively tight, there are long conditions; At the same time, on the domestic side, the limited impact of environmental protection supervision and inspection, coupled with the landing of the new national standard for electric vehicles, has weakened consumer demand to a certain extent, making the supply of lead far greater than the demand. By Friday, the stock barrier in five places of lead ingots in China had increased to about 40,000 tons. The use of funds to make use of this situation for internal and external correction is also one of the factors driving the rise of Lun lead.

Next, August-October is the traditional peak season for domestic lead consumption, which may lead to a month-on-month recovery in downstream consumption. According to the current SMM survey, the price of lead batteries has continued to fall over the past six months, and finally there are signs of a low rebound in the near future. It also gives expectations of the arrival of the peak season of market consumption. In addition, on the 70th anniversary of the National Day parade, various localities have stepped up environmental protection inspection efforts one after another, and do not rule out the future environmental protection production limit from black to non-ferrous. Therefore, the cycle of domestic short selling is coming to an end, at the same time, if the foreign LME lead 0 to 3 liter discount is difficult to form a large BACK structure, after the overseas refineries resume production one after another, the positive market may be difficult to sustain, the future may appear the opportunity of anti-set.