(figure 2: share of imports of zinc concentrate in May 2019)

According to SMM, the main reason for the month-on-month increase in imported zinc concentrate in May was a year-on-year increase:

Second, the output of domestic smelters recorded a further increase in May, an increase of 4.14% over the previous month, mainly due to the gradual resumption of normal production in some large domestic refineries and the increasing trend of output, so the demand for zinc concentrate has been further increased. Superimposed imported ore processing fees have been relatively stable at historic highs. Generally speaking, the production enthusiasm of domestic smelters has a certain boost to the consumption of zinc concentrate. 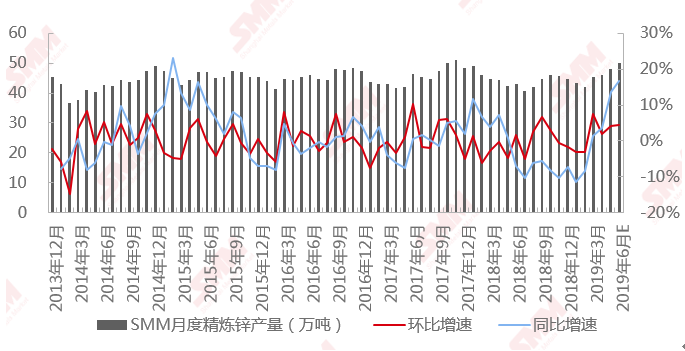 After June, Australian imports returned to normal, with a partial replenishment in the early stage, or a rebound in imports; in addition, the Russian zinc concentrate was exported to China for the first time through the Central European train at the end of May, or there was a partial increase in the original import volume. Finally, based on the fact that the domestic refined zinc production may be increasing, the demand for zinc concentrate still needs to be supplemented by imports, but considering that the loss of zinc concentrate is still high, the import volume may be slightly limited, which is slightly higher than that in May. Overall, SMM expects imports of zinc concentrate to be around 27-280000 physical tons in June.