SMM6, 19 March: since the beginning of this week, Lunxi has experienced two falls and one rise, falling continuously in intraday trading on Monday, falling below all averages in one fell swoop, and rebounding on Tuesday afternoon to climb back to the 5th, 10th and 20th EMA. On Wednesday, Lunxi continued to decline, to $19075 / ton by about 15:00, down 0.7 per cent on the same day. Shanghai tin, after rising to 144990 yuan / ton during the day, fell all the way to close at 144050, up nearly 0.1 per cent during the day. 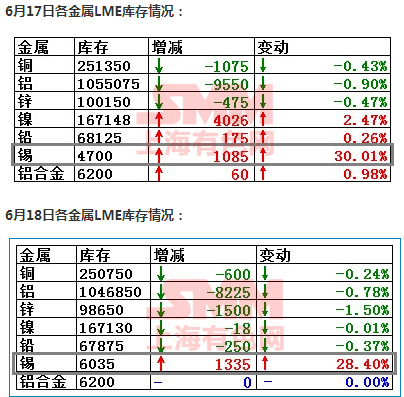 Inventory status of Lunxi from 2018 to the present:

In terms of domestic inventories, data as of June 14 showed that the tin bank in the previous period had fallen for nearly a month and rebounded, rising to 8126 tons on the 14th.

The inventory situation of the previous Institute since the beginning of this year: According to SMM analysis, in this round, due to Singapore's increase of more than 1000 tons for two days in a row, the current inventory of Lunxi has reached 6035 tons, the second highest in nearly 16 years, resulting in a downward trend in the European market from Monday to Tuesday. However, due to the favorable news side of President Xi Jinping's appointment with US President Trang on the 18th, LME basic metals generally rose, and the trend of Lunxi rose. The end of the previous period due to a sharp increase in inventories caused by the decline.

The interest rate resolution to be announced in the US this week is widely expected to remain stable, coupled with the fact that China and the United States were scheduled to meet at the G20 summit yesterday, the market has paid more attention to the outcome of the G20 summit, and the dollar index is expected to remain strong in the short term. If the dollar index remains strong, coupled with the fact that Lensi inventories remain at their second highest level in nearly 16 years, the trend is expected to come under pressure, with support at around $18500 per tonne below the previous platform. if it falls below, the next support is near the previous low of $18150 / tonne, and the upper resistance is near the 40-day moving average of $19400 / tonne.

On the domestic side, due to the impact of Lunxi price fluctuations and macro good news, as of Wednesday, Shanghai tin overall suppressed and then rose, the market multi-empty forces intertwined, the lower support of Shanghai tin is expected to be located in the early platform of 143000 yuan / ton, the upper resistance is located in the 40-day moving average of 145500 yuan / ton.

SMM Morning Comments (Mar 26): Base metals mixed ahead of Senate vote on coronavirus bill, G20 summit
Shanghai base metals opened broadly higher on Thursday morning, as investors await the final Senate vote on the massive stimulus package aimed at combating the economic impact of the coronavirus and the emergency virtual summit of G20 leaders.                London base metals, meanwhile, cruised lower across the board. Tin dropped more than 2%, erasing gains from Wednesday’s jump.

Alphamin's Bisie ups the ante
Alphamin Resources (TSXV:AFM) (JSE: APH) has upped the ante at its Mpama tin complex in the Democratic Republic of the Congo (DRC) in Q1 of 2020 with a new mining method at Mpama North, plans to initiate exploration drilling at its adjacent Mpama South deposit, and a strong focus on increasing production and free cash generation.

SMM Morning Comments (Mar 25): Base metals mixed following a historic rebound on Wall Street; Shanghai copper extended its gains
Shanghai base metals opened mostly higher on Wednesday following dramatic gains overnight on Wall Street as investors await the announcement of an unprecedented stimulus package aimed at combating the economic impact of the coronavirus by US lawmakers.