CST
translation
Source:SMM
Macroscopically, the downward pressure on the global economy has increased, and the Sino-US trade war has resumed. Looking at the fundamentals of copper this year, new production capacity is still expanding rapidly, and the performance of terminal consumption is mediocre. Both supply and demand can play a limited role in supporting copper prices. The spot TC price, as one of the few factors that can benefit the copper price, has also attracted much attention from the market. But the recent spot TC prices continue to fall in support of copper prices at the same time, but also let smelters begin to worry about their own profits.

SMM6, April 4: macroscopically, the downward pressure on the global economy has increased, and the Sino-US trade war has resumed. Looking at the fundamentals of copper this year, new production capacity is still expanding rapidly, and the performance of terminal consumption is mediocre. Both supply and demand can play a limited role in supporting copper prices. The spot TC price, as one of the few factors that can benefit the copper price, has also attracted much attention from the market.

But the recent spot TC prices continue to fall in support of copper prices at the same time, but also let smelters begin to worry about their own profits. 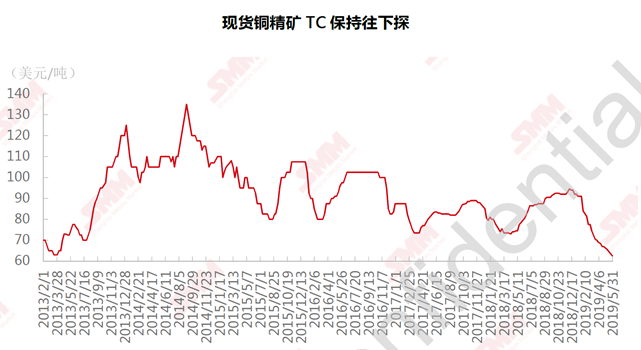 The long order TC price signed by the CSPT team at the beginning of this year was US $80.8 / ton, which was already low at the time. However, according to the latest SMM copper weekly report, the spot TC price for SMM clean mines was US $61 to US $64 as of May 31. It fell another $1 a tonne from the previous week, and the center of gravity shifted further, down about 22.6% from the start of the year. And the market response is even less optimistic, with some holders offering even less than $60 a tonne.

And $60 is basically the profit and loss tipping point for the smelter.

Generally speaking, spot TC is one of the main sources of profits of smelters, and it is the data that smelters focus on, which is of great significance for smelters to set their own production targets.

The first is the direct impact. If the spot TC price continues to decline, touching the critical point of the smelter profit, then the smelter in order to ensure that its own profits will not be damaged, it is necessary to reduce production to a certain extent to ensure profits, otherwise the more production, the greater the loss.

The second is indirect influence. The continued decline in spot TC prices reflects tensions at the mine end, as it is precisely because of tight supply at the mine end that smelters are at a disadvantage in negotiating TC prices and are unable to negotiate high prices. The shortage at the mine end will cause the smelter to passively reduce its output due to the shortage of raw materials.

However, as far as the current situation is concerned, the impact of the decline in spot TC is still limited.

First of all, because most of the large smelters are state-owned enterprises, the annual production target was set when the long order was signed at the beginning of the year, and it is unlikely to change its annual production target because of the fluctuation of TC, so it is still the small smelters that are mainly affected. The long orders signed by these large smelters at the beginning of the year already account for 60 per cent of total capacity, so smelters that may be affected by TC account for about 40 per cent of total capacity. Small smelters, which account for 40 per cent of capacity, do have lower profits as a result of falling TC and sulfuric acid prices. And the impact is expected to show up as early as the fourth quarter of this year.

But SMM believes that smelters need to be alert now is not the impact of spot TC on this year's earnings, but the impact on next year and beyond. Although the current TC price is low, but still above the profit and loss line, but if in the second half of this year and even next year, spot TC continues to decline, then the smelter can still maintain the current profit?

First of all, depending on the situation in the first quarter of this year, the supply of overseas copper concentrate is likely to continue to tighten due to the increase in interference events.

(WBMS), the World Bureau of Metals Statistics, said in May that global mine copper production was 4.99 million tons in January-March 2019, down 0.6 per cent from the same period last year.

Among them, Chilean state copper company (Codelco) produced only 342000 tons of copper in the first quarter of 2019, down 18 per cent from a year earlier.

Zambia also continued to tighten supply as a result of the mining tax reform introduced earlier this year. Zambia's copper production fell 11.3 per cent from January to March from a month earlier to 195244 tons, the (Bank of Zambia) of the Zambian central bank said earlier this week. Zambia Mining Association (Chamber of Mines) previously announced that Zambia's copper production this year is expected to be reduced by about 100000 tons compared with the same period last year.

Negotiations between Minmetals Resources' Peruvian Las Bambas copper mine and local indigenous communities are also ongoing and no final agreement has been reached, but roads from the mine to the port have been blocked several times.

In the case of smelters, as mentioned above, production plans for large domestic smelters are generally drawn up at the beginning of the year and are unlikely to change as a result of some market fluctuations. So under this premise, as the centralized overhaul of the smelter draws to a close in June, about 50-600000 tons of new production, which was set at the beginning of the year, will soon be released in the second half of this year. If overseas mine supply continues to shrink in the second half of the year, as in the first quarter of this year, the increase in domestic capacity, accompanied by mine-side tightening, is likely to cause TC prices to fall further, reaching the $60 profit-and-loss line.

Helen Lau, an analyst at Argonaut Securities, said in the report that the increase in smelting capacity in China and the further reduction in scrap copper imports would further depress the price of spot TC.

So in this case, SMM believes that small smelters should be vigilant and consider that if spot TC prices fall below the profit and loss line in the second half of this year or next, as currently reflected, Well, whether the original production capacity will still be put in place as scheduled.