On May 24, 2019, the Mexican Ministry of Economic Affairs announced the initial adjudication of an anti-dumping investigation into China's aluminum foil rolls and decided to impose provisional anti-dumping duties. The Mexican customs tariff number for the products involved in the case was 76071101, which was specifically described as having a thickness of ≤ 0.08mm and no backing. Rolled aluminum foil with external diameter ≥ 100mm and weight > 5kg.

The mode of taxation is a combination of minimum price and separate tax rate, as follows:

1. The minimum price is $3.4817 / kg. When the import customs clearance price of the product involved is higher than the minimum price, no interim anti-dumping measures shall be taken.

Interested parties may submit comments and supporting materials to the Mozambican investigation organ on the results of the initial adjudication, and the deadline shall be before 14:00 on the 20th working day after the publication of the announcement; The address of the Mexican investigation agency is: Av. Insurgentes Sur 1940, Col. Florida, C.P.01030.

In 2018, China exported 1.2858 million tons of aluminum foil to Mexico, accounting for only 3.98 per cent of the total. China's aluminum foil export destination countries ranked according to the volume of India, Thailand, South Korea, the United States, Indonesia and so on, Mexico only ranked eighth. And the aluminum foil involved in this case is only a part of unlined double zero foil, the amount involved is even smaller. According to customs data, China's monthly export volume of aluminum foil to Mexico has been relatively stable since 2018, and the change has converged with the total export volume. However, SMM has always stressed that it has become a trend for overseas countries to carry out double reaction to China's aluminum foil products, and aluminum foil enterprises need to remain vigilant and flexibly respond to the trade situation. 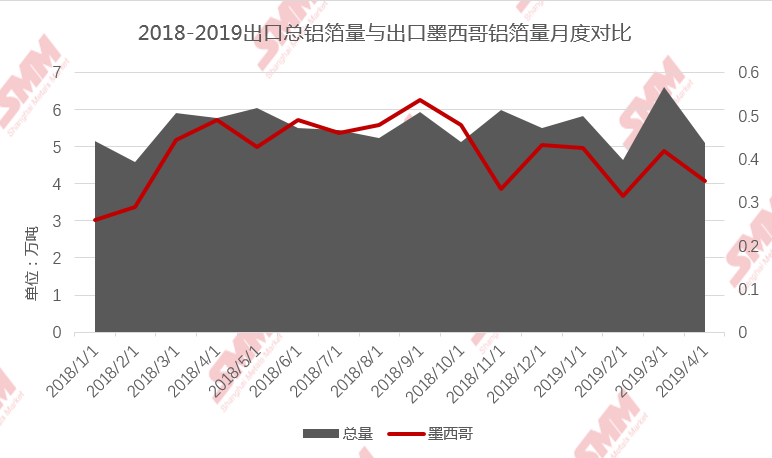 Bauxite
import and export
output
For queries, please contact Frank LIU at liuxiaolei@smm.cn
For more information on how to access our research reports, please email service.en@smm.cn