SMM11, March 2: due to severe energy and environmental challenges, the transformation of traffic energy power has become a global consensus, and automobile technology has ushered in an era of electrification of the power system. The development of electric vehicles has become the consensus and main direction of the technological development of the automobile industry all over the world. With the improvement of the national policy on the energy density of new energy vehicle batteries, the demand of superimposed consumers for mileage is getting higher and higher, and the demand for soft package power batteries with higher energy density will continue to increase. As the packaging material of soft package battery, the demand of aluminum plastic film will continue to grow. In terms of localization, aluminum plastic film is the only material with low domestic production rate in power battery materials. With the continuous improvement of the technology of domestic high-quality enterprises, it is expected that the domestic production rate will increase significantly.

What is aluminum plastic film?

Aluminum plastic film is the outer packaging of soft package battery, which has puncture resistance, corrosion resistance, high temperature resistance and good barrier. Soft package battery is one of the three packaging methods of power battery, in addition to square and cylindrical. The advantage of the soft package is that it is not explosive (when there is a safety problem, it is generally inflated and cracked. It is not easy to explode), high energy density (using lighter aluminum plastic film as packaging), long cycle life (average cycle attenuation is about 5% less than that of aluminum shell), and flexible shape design. In terms of shortcomings, the design is complex and the group efficiency is low. In addition, the packaging methods of the three batteries are also different, because the square and cylindrical outer packaging are metal, so laser welding is required, while the soft package is aluminum plastic film, using thermal packaging. 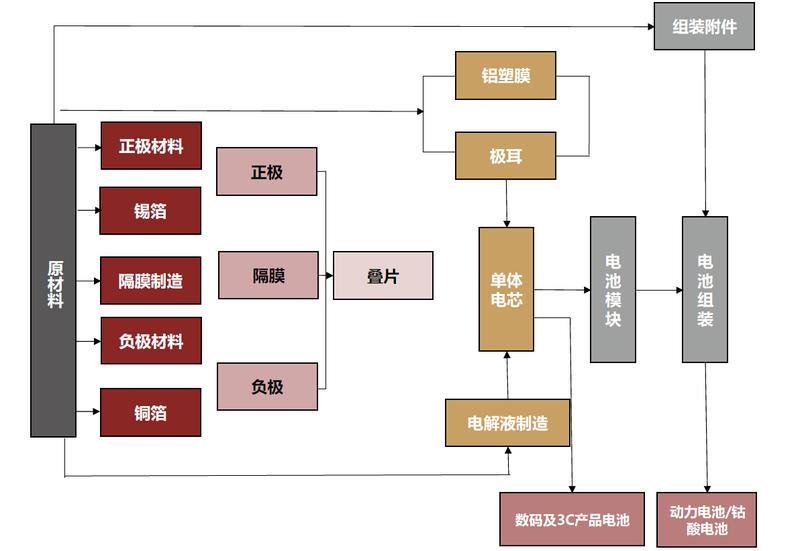 Why is aluminum plastic film enterprise worth investing?

1. The increasing trend of dynamic soft package permeability at the level of technology and policy.

From a technical point of view, the soft package battery has higher energy density than the other two batteries and has the advantage of providing long service life. In terms of safety, due to the use of non-metallic packaging materials, the risk of explosion is greatly reduced and the safety performance is strong. From the policy level, the plan to increase the energy density of power batteries has been mentioned many times in government documents, including "made in China 2025" to reach 300Wh/kg by 2016 to 2020, and 2021 to reach 400Wh/kg by 2025. From the point of view of the material characteristics, the characteristics of the soft package battery are in line with the overall development trend of the industry. In the domestic market, the penetration rate of power soft packages has increased from 12% in 16 years to 15% in 17 years, and we expect to reach 35% to 40% in the long run. 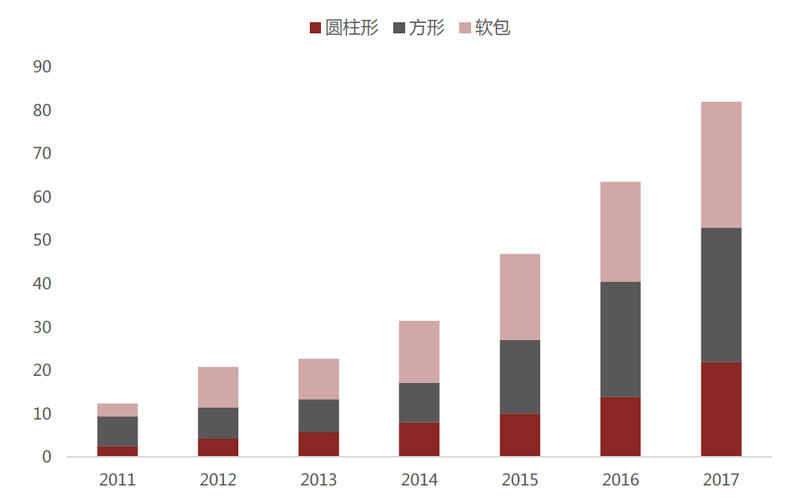 (Gwh) of three kinds of Power batteries in China

Domestic lithium battery shipments totaled 82 Gwhs in 2017, up 28% from a year earlier. Among them, 3C lithium battery 37.5 Gwhand power lithium battery 44.5Gwh. According to the classification, the proportion of soft package, square type and cylinder in the battery was 35.4%, 37.8% and 26.8%, respectively. From the historical trend analysis, the permeability of digital soft package increased rapidly, from 15% in 2011 to 70% in 2016, mainly because of its light structure and flexible shape, which is in line with the requirements of digital products. In terms of future demand, we believe that in addition to the original digital products, emerging demand, such as wearables and drones, will maintain a relatively stable growth rate in the industry.

Aluminum plastic film as the outer packaging of soft package power battery, the cost accounts for about 15% to 20% of the whole power battery. At present, the production of aluminum-plastic film is mainly controlled by Japanese manufacturers, of which DNP, Showa electrician and T T (acquired by Xinlun Technology in 2016) together account for nearly 90 per cent of the market. At present, the main domestic players include nylon science and technology, Zijiang enterprises, Dao Ming optics and so on. 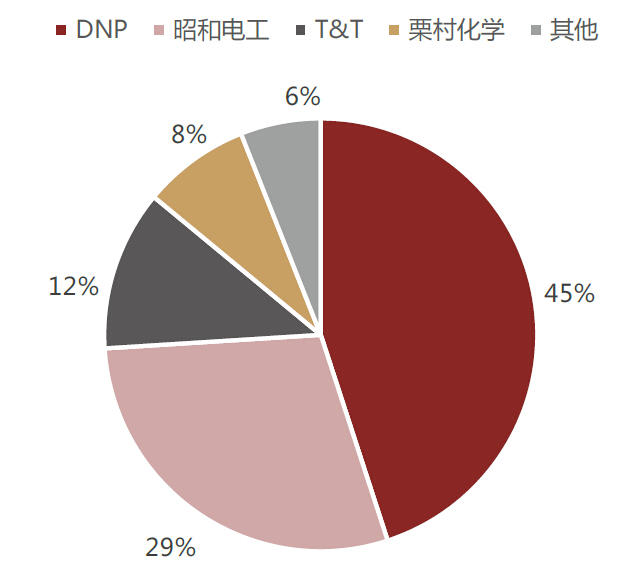 From the point of view of domestic substitution, the national yields of positive electrode, negative electrode, diaphragm, electrolyte and aluminum-plastic film are 92%, 98%, 90%, 100% and 10%, respectively. Aluminum plastic film is the only material without large-scale localization. Recently, due to technological breakthroughs and overseas mergers and acquisitions, shipments of domestic manufacturers have increased significantly. In 2017, Xinlun, Zijiang and Daoming shipped 10 million, 7 million and 1.03 million square meters respectively, and from the perspective of capacity planning, there will be explosive growth in the next two years. Due to the high penetration of soft packages in the digital field, domestic manufacturers are the first to cut into the digital field. In 2016, Nippon bought Japanese T / T and cut into the electric soft package industry. From the point of view of price, the domestic aluminum-plastic film is about 30% lower than that of Japanese products at present. In the medium and long term, it will be the general trend for domestic enterprises to carry out large-scale import substitution by virtue of cost advantage. 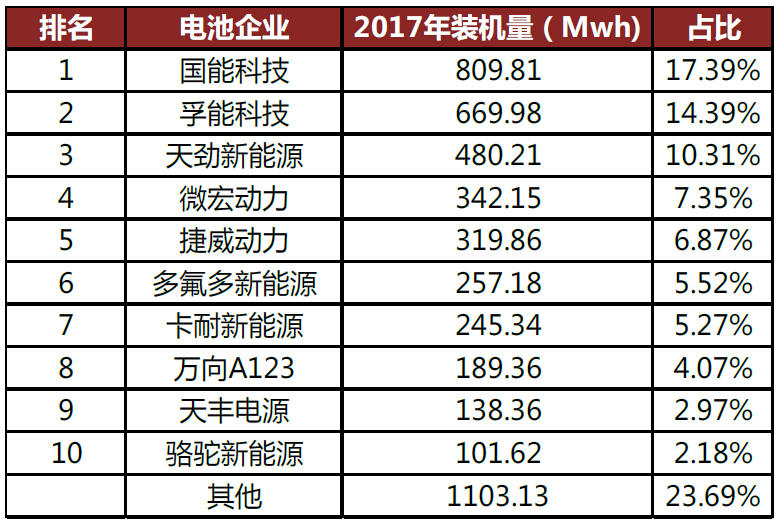 Main difficulties in the manufacture of Aluminum plastic Film

From the point of view of the difficulty of manufacture, the main difficulties lie in the key materials, electrolyte corrosion resistance and deep penetration of the inner layer. Manufacturing materials are currently highly dependent on imports of raw materials. Mainly on the thinness, smoothness, smoothness (such as the number of holes per square meter) is higher, the domestic can not produce. At present, aluminum foil accounts for 50% of the total cost of aluminum plastic film. The aluminum plastic film consists of three layers: the external resistance layer, the penetration layer and the heat sealing layer, each of which is bonded by adhesive. In addition to the need to protect the cell as a shell, it is also necessary to prevent the contact of oxygen and moisture with the internal cell, as well as the corrosion of the electrolyte from the inside of the package, resulting in leakage. The manufacturing method is mainly divided into two kinds: dry method and thermal method. The main difference between the two methods is that the dry method is the extrusion bonding between the aluminum foil layer and the hot sealing layer, while the thermal method is the fusion of the thermal sealing layer with MPP, and then melting the MPP at high temperature and then bonding with the aluminum foil layer. The thermal method takes a long time, the brittleness of the material is high, and the relative depth of penetration is poor, but the corrosion resistance and water resistance of the material are slightly better than that of the dry method. 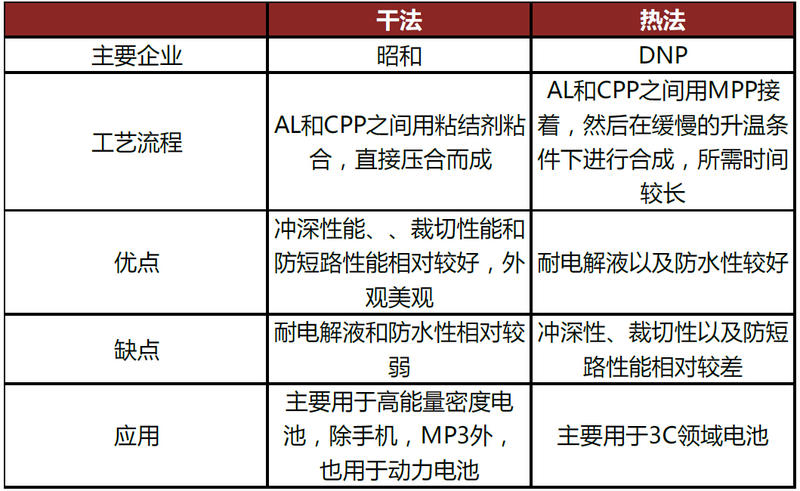 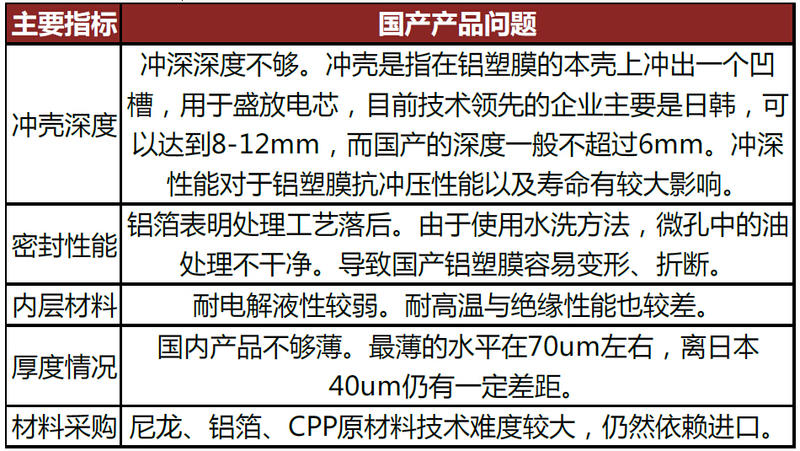 Generally speaking, as the core component of electric vehicle, power battery has developed rapidly in industrialization in recent years, which has strongly supported the development of electric vehicle industry. Aluminum plastic film as a soft food and core packaging, its technology and development still has a long way to go. It is expected that the domestic aluminum plastic film industry has more than 10 times growth potential in 3 years. Its future development can be compared with the development history of domestic positive and negative electrode materials, electrolyte and diaphragm industry in the past 2 years, and high quality companies are expected to grasp the general trend of domestic substitution. If the quality of domestic enterprises can reach the foreign level, and the price is lower than imported products, it will be favored by the battery industry.