CST
Source:SMM
This is a roundup of China's metals weekly inventory as of January 20.

SHANGHAI, Jan 20 (SMM) - This is a roundup of China's metals weekly inventory as of January 20.

Aluminium ingot: The aluminium ingot social inventories across China’s eight major markets stood at 744,000 mt as of January 19, up 102,000 mt or 15.8% from a week ago and 252,000 mt from the end of December. The figure was also 18,000 mt higher than the same period last year. The inventory accumulation during the Chinese New Year (CNY) varied each year, and averaged around 160,000 mt, but occasionally stood as high as 180,000-190,000 mt. In view of the enormous aluminium ingots that are currently in transit, the social inventories will probably add more than 160,000 mt during the 2023 CNY holiday. Assuming an inventory accumulation of 180,000 mt during the holiday, the social inventories will total approximately 920,000 mt after the holiday.

Aluminium billet: The domestic aluminium billet social inventory extended the increase this week and stood at 131,900 mt as of January 19, up 37,200 mt or 39% from week ago. The growth far outpaced the increase of 19.6% 29% in the last week before the CNY holiday in 2022 and 2021. All the major markets saw inventory accumulation. The inventory in Foshan added 18,900 mt to 64,300 mt, driven by high shipments from south-west China. The inventory in east China also maintained seasonal accumulation. Billet plants in Shandong shipped their surplus cargoes to Jiangsu and Zhejiang, but the transactions were muted. Aluminium billet output cuts are expected to expand further in January. Most of the small and medium-sized aluminium extruders were shut down last week for the CNY holiday, leaving only a small number of large extruders still in operation to digest their orders. The aluminium billet social inventories in east and south China are expected to climb further. And the inventories of billet plants and downstream enterprises will also gradually pile up.

SMM data shows that the zinc ingot social inventories across seven major markets in China totalled 103,000 mt as January 20, up 23,900 mt from a week ago (January 13) and up 13,700 mt from this Monday (January 16). In Shanghai, the inventory continued to accumulate with stable arrivals and basically no outflows. In Tianjin, the trades in the market were slack as most downstream enterprises were closed for the CNY holiday. The low outflows from warehouses added to the inventory in Tianjin. In Guangdong, the arrivals in the market were concentrated in the first half of the week, and the trades were rather muted. As a result, the inventory in Guangdong rose still. Taken together, inventories in Shanghai, Guangdong and Tianjin rose 12,200 mt, and inventories across seven major markets in China gained 13,700 mt. 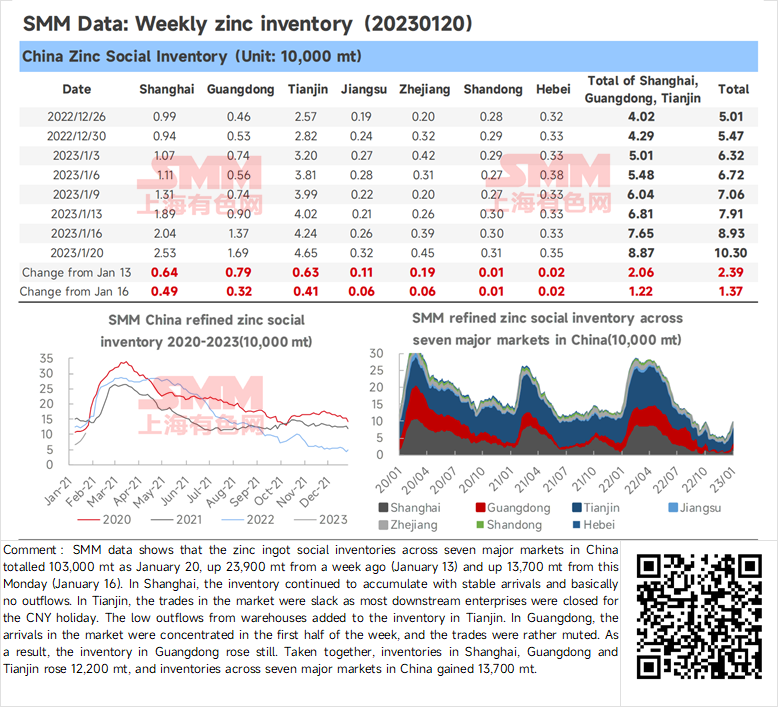 As of January 20, the social inventory of lead ingots across Shanghai, Guangdong, Zhejiang, Jiangsu and Tianjin was 56,500 mt, up 6,700 mt from January 13 but down 200 mt from January 16.
According to research, most downstream enterprises were on holiday for CNY since this Friday. Coupled with the halted logistics services, the lead market was cold and the transactions were muted. Meanwhile, the deliverable lead ingots gradually arrived at the warehouses for the delivery of SHFE 2301 lead contract at the beginning of this week. As such, the social inventory of lead ingot increased sharply. But the social inventory declined slowly afterwards after some cargo holders delivered their last batch of goods before the logistics services were halted on January 18. After the CNY holiday, the social inventory may increase further due to the longer vacation taken by downstream enterprises. 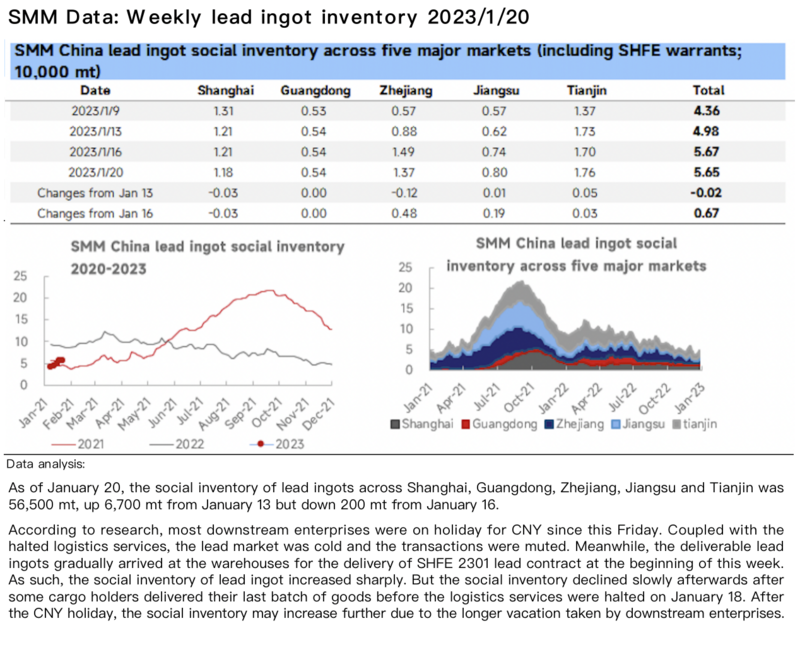 According to SMM statistics, as of January 20, the social inventory of silicon metal across Huangpu port, Kunming city and Tianjin port remained at 123,000 mt.
The inquiries and transactions were light this week while some overseas export orders for high-grade silicon were released. The overall inventory at Tianjin port remained stable as only a small amount of goods were shipped. The inventory will continue to stabilise amid the halted logistics iservices during the Chinese New Year holiday.

Copper inventories in the domestic bonded zone grew 16,400 mt from January 13 to 87,200 mt as of January 20, according to SMM survey. The inventory in the Guangdong bonded zone dipped 300 mt to 5,300 mt WoW, which was contributed by the low arrivals, while that in Shanghai added 16,700 mt to 81,900 mt WoW. The SHFE/LME copper price ratio dropped again this week. The import losses once surged to more than 1,600 mt over the SHFE front-month copper, which greatly suppressed the market demand. Bills of lading arriving at ports were generally moved into the warehouses. Goods for exports shipped by some domestic smelters will also be stored in the bonded zone warehouses first amid the open export window, which will push up the bonded zone inventory rapidly. 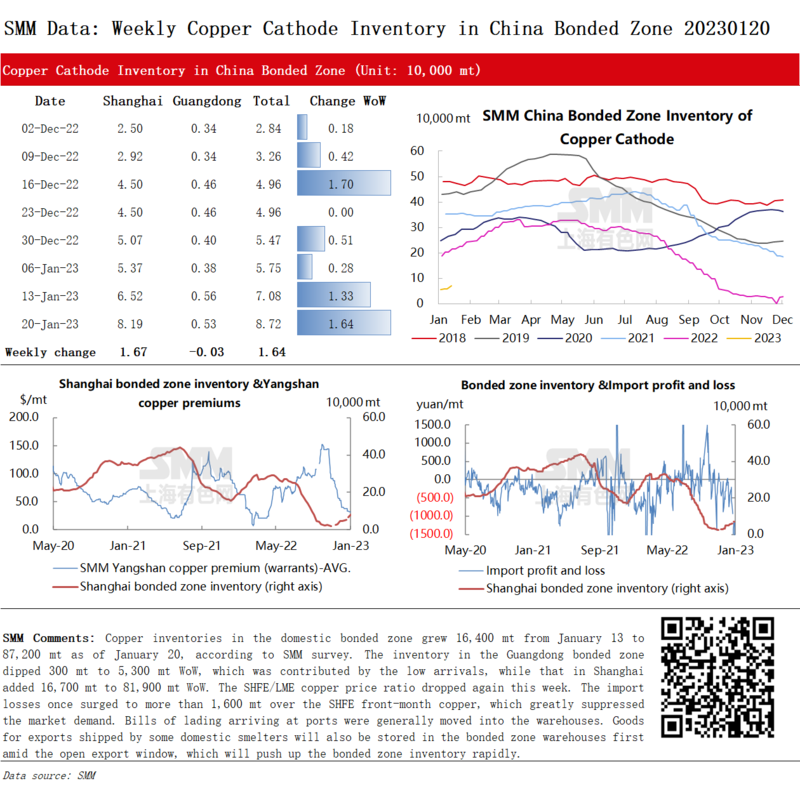 In detail, the inventory in Shanghai grew 27,100 mt to 125,500 mt compared with Monday, and the inventory in Jiangsu added 3,000 mt to 36,600 mt, which was contributed by the increased arrivals at domestic smelters. And the inventory in Guangdong rose 10,300 mt to 25,400 mt. Inventories in various places have increased significantly this week. The smelters did not stop production approaching the Chinese New Year holiday, while the downstream companies were on holiday. In such a context, the smelters had to ship copper cathode to warehouses.

Looking forward, although the export window has been opened recently, the smelters will ship a small amount of the goods to bonded zone warehouses or neighbouring countries. Most of their goods will be shipped to the domestic market. Therefore, SMM expects that the inventory will continue to increase post-holiday.

As of January 20, inventory of nickel ore across Chinese ports dipped 96,000 wmt to 8.58 million wmt compared with last Friday. The total Ni content fell 1,000 mt to about 67,000 mt. Inventory of nickel ore across seven major Chinese ports stood at 4.94 million wmt, up 64,000 wmt WoW. The arrivals at Lanqiao Port grew palpably. Nickel ore trading remained slack as the Chinese New Year comes closer. Arrivals of nickel ore at ports stood low due to the rainy season in the Philippines. On the demand side, steel mills and NPI plants suspended the production for overhaul, reducing the demand for nickel ore. On the whole, the inventory of laterite nickel ore dropped slowly. After the Chinese New Year holiday, the port inventory may fall rapidly with the improvement of downstream demand.