SHANGHAI, Jan 12 (SMM) - SMM data shows that the zinc ingot social inventories across seven major markets in China totalled 79,100 mt as of January 13, up 8,500 mt from this Monday (January 9) and up 11,900 mt from a week earlier (January 6). In Shanghai, the inventory rose with the upcoming CNY holiday. Moreover, some smelters were slated to deliver SHFE front-month zinc contract with the approaching deadline, and the outflows from warehouses dropped at the same time amid weak the pre-holiday consumption. Altogether, the inventory in Shanghai recorded a significant increase. In Tianjin, the arrivals in the market during last weekend were low, and smelters and traders were gearing up for the futures delivery. In addition, the trades were slack as downstream enterprises planned to close this weekend. As a result, the inventory in Tianjin added slightly. In Guangdong, there were concentrated arrivals in the market last weekend, but outflows from the warehouse were scant as downstream buyers refrained from stockpiling. The inventory in Guangdong eventually rose. Taken together, inventories in Shanghai, Guangdong and Tianjin advanced 7,700 mt, and inventories across seven major markets in China gained 8,500 mt. 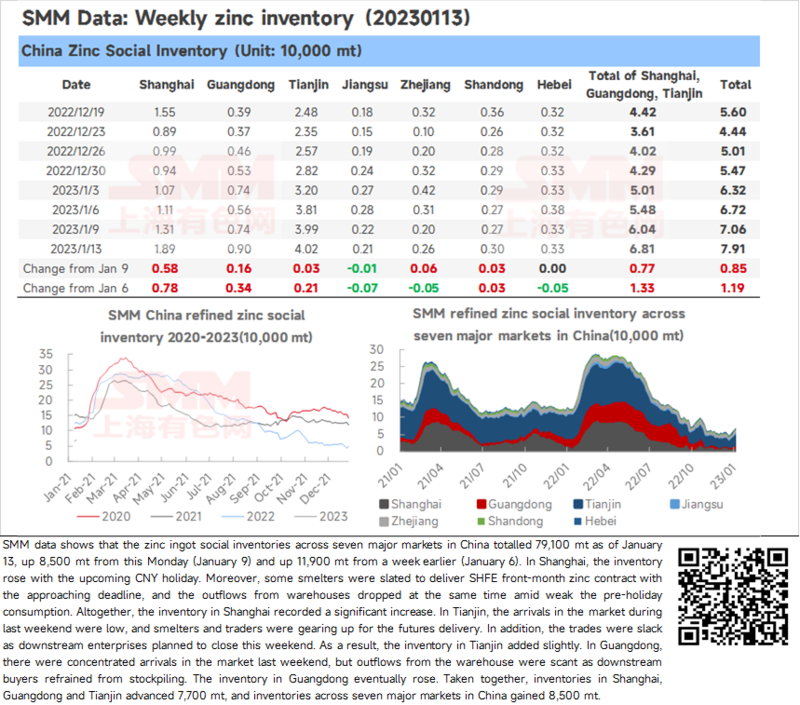