CST
Source:SMM
This is a roundup of China's metals weekly inventory as of December 9.

SHANGHAI, Dec 9 (SMM) - This is a roundup of China's metals weekly inventory as of December 9.

As of Friday December 9, SMM copper inventory across major Chinese markets stood at 104,800 mt, down 2,600 mt from Monday and 7,900 mt from last Friday. Compared with Monday’s data, the inventories in Guangdong, Jiangsu, south-west China and Tianjin declined, while those in Shanghai and Zhejiang grew slightly. The total inventory was 14,700 mt higher than in the same period last year when the figure was 90,100 mt. Among them, the inventory in Shanghai added 200 mt, that in Guangdong grew 2,400 mt, and that in Jiangsu rose 13,500 mt.

In detail, the inventory in Shanghai added 3,800 mt to 68,200 mt from Monday because arrivals of imported copper increased. Inventory in Guangdong dipped 4,400 mt to 11,500 mt. On one hand, shipments from the three surrounding smelters decreased due to maintenance. On the other hand, downstream companies bought goods from warehouses as the volume of goods shipped directly to factories dropped, which was reflected in the continuous increase in the daily average shipments flowing out of the warehouses in Guangdong. The decline in inventory in Tianjin was caused by the growing shipments from smelters in north-east China to the east.

Looking forward, the arrival of imported copper will be flat WoW next week, but that of domestic copper will grow, the SMM survey shows. The overall supply will be higher than this week. Some factories will restock raw materials and ramp up their production with the relaxation of COVID-19 control measures in various regions. But the situation will only last shortly, and the mushrooming copper prices also suppress the recovery of consumption. Therefore, the supply and demand will improve somewhat next week, and the inventory will rise slightly.

Nickel Inventories in Domestic Bonded Zone Up 1,120 mt from December 2

As of December 9, bonded zone inventory of nickel stood at 6,300 mt, with the inventory of nickel briquette and nickel plate of 1,370 mt and 4,930 mt respectively. Spot import losses surged to 30,000 yuan/mt in the week as the price difference between domestic and overseas futures prices did not show signs of narrowing and the SHFE/LME nickel price ratio fell to 7. Sources of the imported spot were scarce amid the lower-than-expected customs clearance volume and the domestic pure nickel rigid demand, thus some pure nickel was shipped to ports to clear customs in the week.

SMM data shows that social inventories of zinc ingots across seven major markets in China totalled 53,700 mt as of this Friday (December 9), up 2,600 mt from the previous week and down 800 mt from this Monday (December 5). In Shanghai, the zinc ingots sent from the smelters did not arrive yet, while most arrivals of the zinc ingots transferred from Tianjin were shipped directly to the factory. On account of weak supply and demand, the local inventory changed little. In Tianjin, the demand for zinc ingots weakened as the orders received by galvanising enterprises were poor and most enterprises were preparing for holidays. When the spread between Tianjin and Shanghai expanded, some zinc ingots were shipped from Tianjin to Shanghai. Therefore, the inventory in Tianjin diminished in addition to low arrivals. In Guangdong, the arrivals in the market were low amid constantly falling premiums. Although the overall downstream consumption was sluggish, some enterprises still stocked up considering the approaching holiday, thus, the inventory in Guangdong was down slightly. Overall, the total inventory in Shanghai, Guangdong and Tianjin fell 1,800 mt, and that across seven major markets in China shed 800 mt. 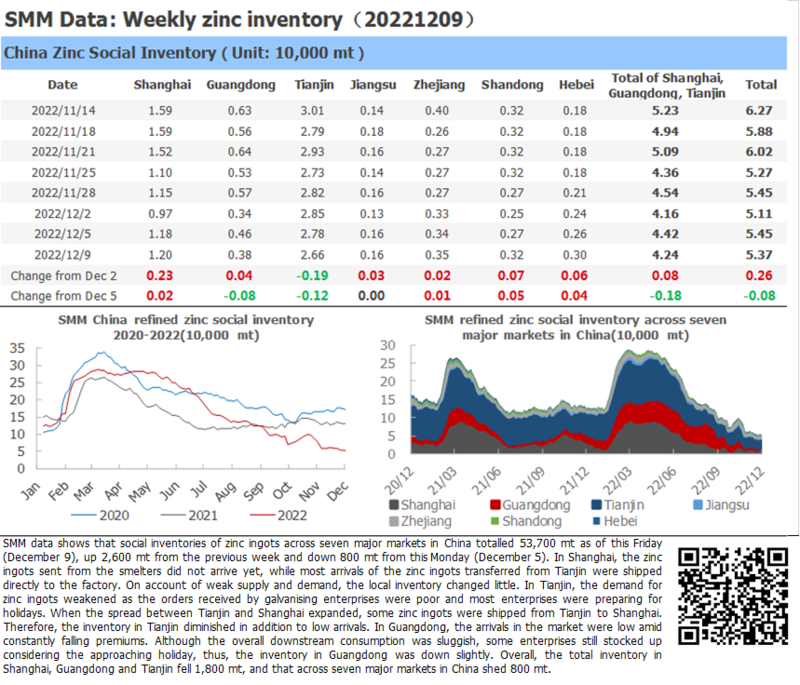 Copper inventories in the domestic bonded zone added 4,200 mt from December 2 to 32,600 mt on December 9, according to SMM survey. Inventory in the Shanghai bonded zone grew 4,200 mt to 29,200 mt, while that in the Guangdong bonded zone remained unchanged. The increase in inventory this week was contributed by the exports of domestic smelters and the arrivals of the bill of lading at bonded zone warehouses. Smelters were more willing to export their goods amid the opening of the export window. However, inquiries of goods under the bill of lading at ports were extremely sluggish owing to the low SHFE/LME copper price ratio. Traders had to move their goods into the bonded zone warehouses amid the dropping Yangshan copper premiums. 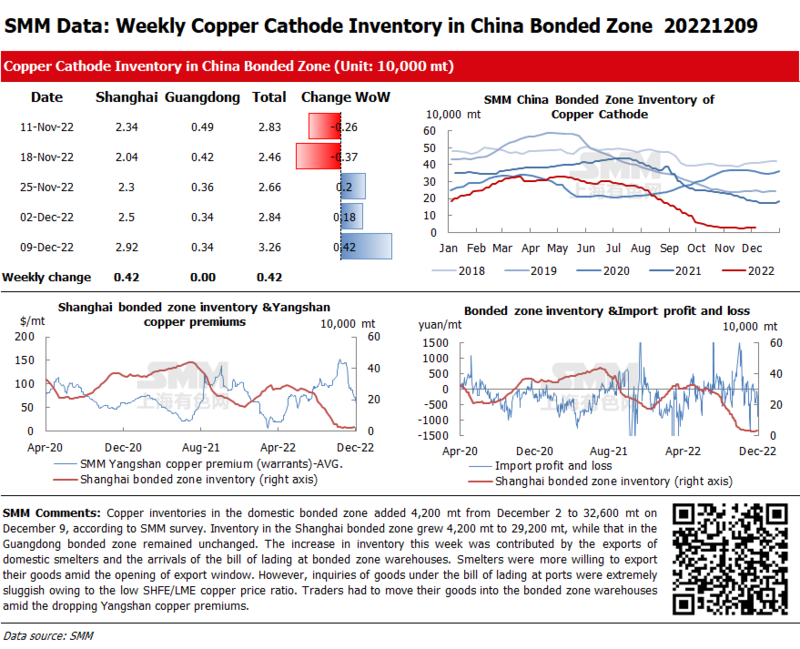 The social inventory of silicon metal across Huangpu port, Kunming city and Tianjin port increased 3,000 mt from the previous week to 122,000 mt as of December 9. The arrivals at ports and inland social warehouses diverged. Most of the goods that flew out of the warehouse in Kunming were delivered to traders. Silicon companies did not ship much due to unsatisfactory prices. The goods flew into the Huangpu port were mostly chemical-grade silicon metal. The shipment flow of Tianjin port and Huangpu port increased compared with last week, and the market transactions improved. 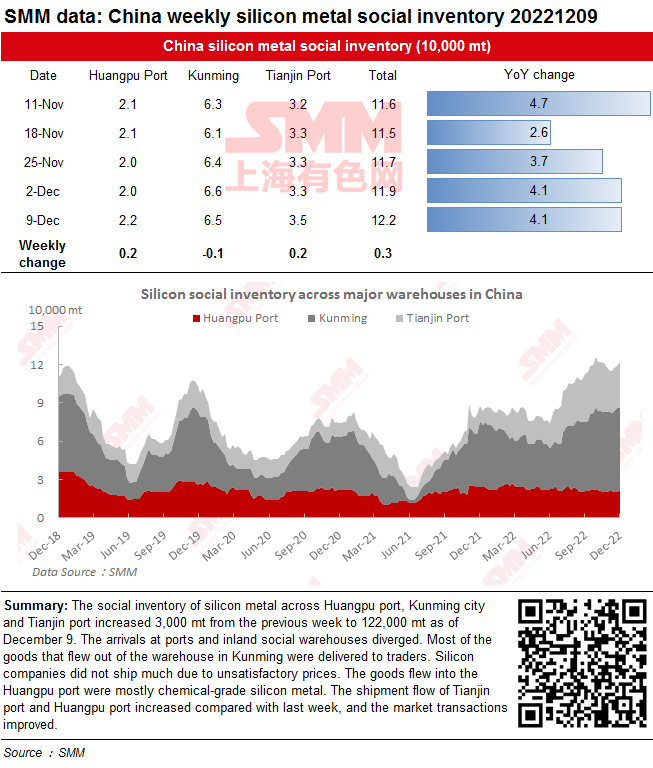 As of December 9, the social inventory of lead ingots across Shanghai, Guangdong, Zhejiang, Jiangsu and Tianjin was 45,800 mt, down 500 mt from last Friday (December 2) and 900 mt from this Monday (December 5). 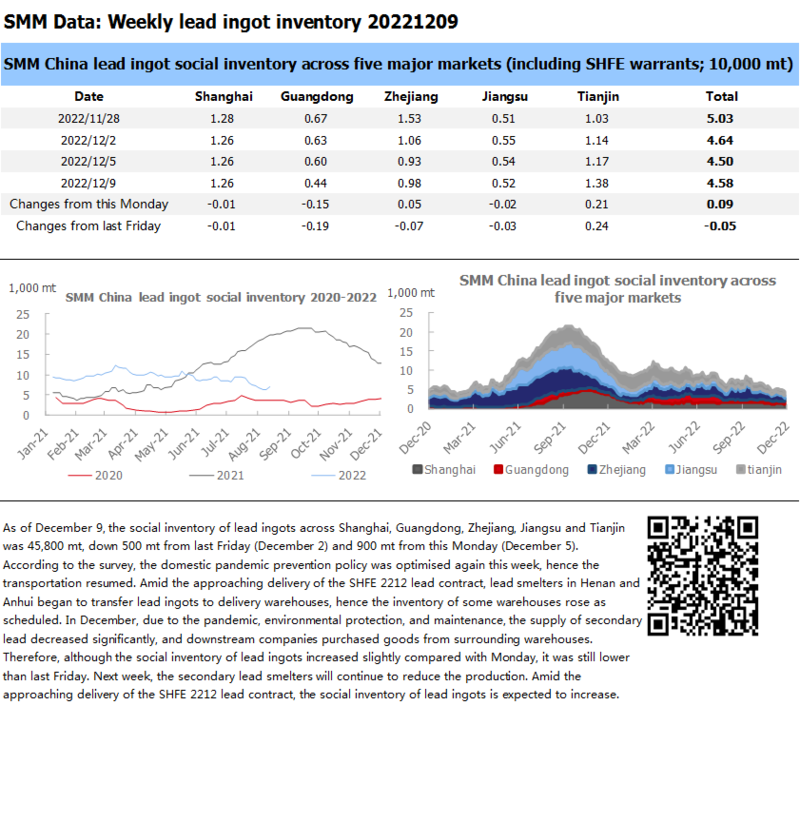 All
MOST POPULAR
1.Molybdenum Prices Hit a 17-Year High with Persistent Tight Supply
2.SMM Review of China's Metals Market during CNY Holiday and Forecast
3.The IMF Raises Its Global Economic Growth Forecast for 2023, with China Leading the Way
4.China Weekly Inventory Summary and Data Wrap (Feb 3)
5.SMM Data: China's Monthly EMM Exports in Dec 2022
Shanghai Metals Market
Privacy PolicyCompliance CentreSMM Credit ServiceContact UsAbout UsTerms & ConditionsSitemap
Notice: By accessing this site you agree that you will not copy or reproduce any part of its contents (including, but not limited to, single prices, graphs or news content) in any form or for any purpose whatsoever without the prior written consent of the publisher.