CST
Source:SMM
Overall, the total inventory in Shanghai, Guangdong and Tianjin gained 2,600 mt, and that across seven major markets in China was up 3,400 mt.

SHANGHAI, Dec 5 (SMM) - SMM data shows that zinc ingot social inventory across seven major markets in China totalled 54,500 mt as of December 5, up 3,400 mt from last Friday (Decemeber 2) and flat from a week earlier (November 28). In Shanghai, the transportation recovered slightly from the pandemic, but the downstream buyers were not willing to purchase. Therefore, the inventory in Shanghai added. In Tianjin, regardless of the low arrivals in the market, some goods holders still sent cargoes to east China. As a result, the inventory in Tianjin dropped despite sluggish local demand. In Guangdong, the arrivals in the market were still stable, and the local consumption was flat. Eventually, the inventory in Guangdong increased slightly. Overall, the total inventory in Shanghai, Guangdong and Tianjin gained 2,600 mt, and that across seven major markets in China was up 3,400 mt. 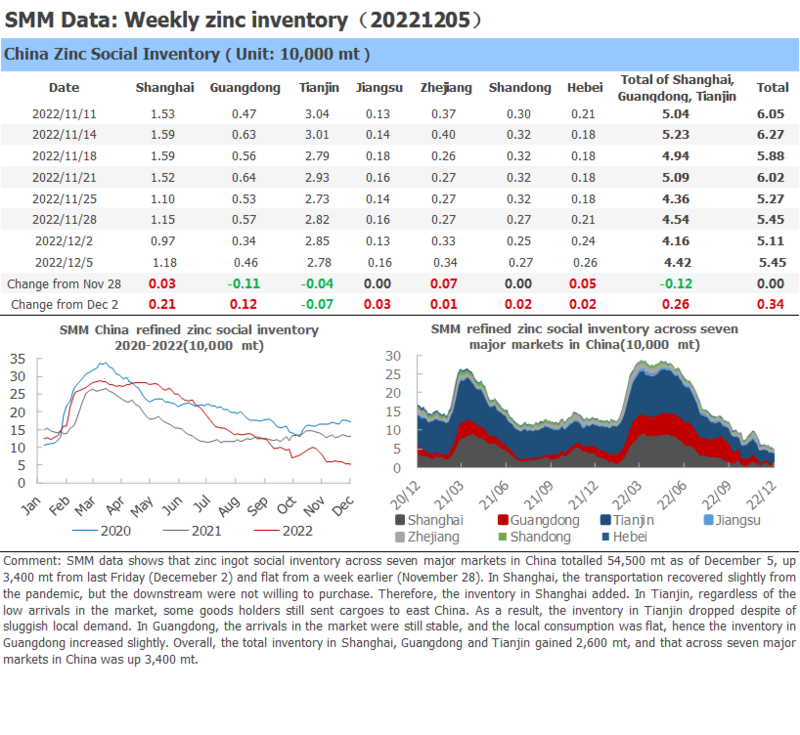